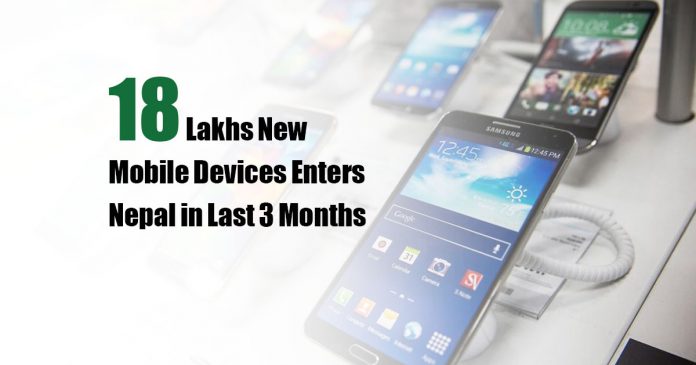 With the introduction of new mobile brands in Nepal, the numbers of mobile units that have been imported and sold are getting remarkable increments. Just in first three months of this fiscal year 2073/2074, 1.8 million (18 lakhs) new mobile units are reported to have been imported already. That is approximately 237,000 more units as compared to those imported in first three months of last fiscal year.

This increment can be considered to be a motivating factor to newly introduced mobile brands lately. In the ranking of most imported goods, telecommunication equipment happens to be in the ninth ranking. The sources claim 44.5 % increment in the import of total telecommunication equipment as compared to those of last year’s first trimester. Out of those, mobile units and their spare parts fall on the top of the list of that list.

This huge increment in import and selling of mobile units may be due to the emerging of new mobile brands in Nepal. The International brands like Samsung, Huawei, Gionee, Micromax, Xiaomi, Lenovo, Oppo are found to be doing pretty well lately. The new international brands are jumping right in the Nepali Market one after another lately. Leagoo is about to be launched today and many others are in the process of being launched as well.

From a customer’s viewpoint, this is a good thing to many options and it has created a healthy competitive scenario to the seller’s as well. All companies are pushing their devices to offer more at a lesser price. Nowadays, several phones are offering the best value for your money. But, to get the best from your available budget, you might want to consider phones from different companies in similar price range. Keep that in mind, not all the phones that are good in paper perform equally well while using. Before buying a new mobile we recommend you to check its reviews. It might be wiser to ask for advice from those who already own the phone that you’re planning to buy next.