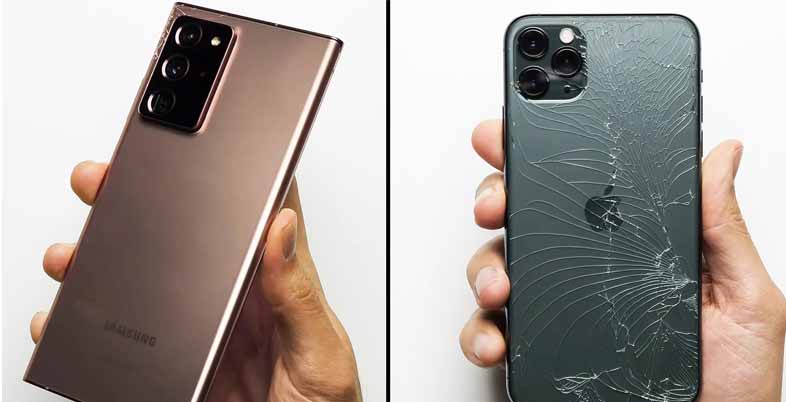 There’s no doubt that smartphones have become an integral part of our lives. And thus have to go through the everyday turbulence along with us. They are vulnerable to drops and are usually in out pockets alongside our keys, and whatnot. Therefore, the smartphone screen nay the complete package should be robust. Every year, we see smartphone companies boast about how they have used the strongest material yet. However, most often than not they tend to be nothing more than mere statements. So, when Samsung announced that it was going to use the Corning Gorilla Glass Victus, the strongest one yet, many were skeptical about the statement. After all, nothing can be confirmed without a drop test. And that’s what we’ve got today. Let’s see whether the Gorilla Glass Victus is actually a tough one and how the Galaxy Note 20 Ultra fares against the iPhone 11 Pro Max in a drop test.

Firstly, let’s talk about the material used in the Galaxy Note 20 Ultra. The device is the first and the only one to come with Corning Gorilla Glass Victus, both front, and back. The name Victus, itself means to live/survive, meaning it will help your device to survive.

The Gorilla Glass Victus is the latest aluminosilicate glass from Corning that improves upon the Gorilla Glass 6. With durability becoming an important issue for smartphone owners, Corning was hell-bent upon improving the scratch and drop resistance in the Victus. Previously, the company used to focus on only one issue at a time.

The Gorilla Glass Victus was tested for taking falls from 2 meters. Previous, iterations for instance were only tested from 1.6 meters. Furthermore, this glass scored 8N load in the Knoop hardness test. This test measures the force applied to scratch using a diamond. Most aluminosilicate glasses including the previous Gorilla Glasses tend to scratch between 2-4 N load. Thus, one can easily see the significant improvements in Gorilla Glass Victus.

According to various tests, the Victus can survive a 20 1m drop test on average. For reference, Gorilla Glass 6 only survived 15 drop tests from the same height. So, there’s a 25% increment in the impact resistance in Victus.

Well, various tests have proved that the Corning Gorilla Glass Victus is indeed the “strongest glass ever”. However, at the end of the day, the durability of the phone is decided by how a manufacturer implements that glass. For instance, a manufacturer may implement a thinner sheet of the Victus to make the device thinner and drop its strength to the levels of Gorilla Glass 6. Or one can retain the thickness and use a stronger material. Basically, it is all down to the manufacturer’s implementation of the material.

With Samsung implementing the Gorilla Glass Victus, many were keen to find out whether it can really stand the falls. And obviously, its test results were going to be compared with its competitor, the iPhone 11 Pro Max. Now, I am not gonna wait until the end to reveal the results. Multiple, drop tests clearly show that Samsung Galaxy Note 20 Ultra is more durable than the iPhone 11 Pro Max by a country mile.

When dropped from a height of 1m onto a concrete surface, Note 20 Ultra does pretty well in the backdrop test and the screen drop test. One may only see a few cracks here and there on the back, but the screen remains intact with minimal scratches. iPhone 11 Pro Max on the other hand gets smashed. The iPhone does seem to have a slight edge in the corner drop test, but that’s just minimal.

Even when dropped from a height of 1.45m 10 times in succession, Note 20 Ultra came out with minimal scratches. iPhone on the other hand pretty much loses its major functionality when put through the same tests.

So, if you want to get the strongest and the most durable smartphone in the market, you’d want to get the Samsung Note 20 Ultra, which is currently available for pre-booking in Nepal. However, one must understand that these drop tests are usually done with a sample size of 1 and the test result may not translate to reality in all situations. But worry not as there is 1-year breakage insurance in Nepal.