Gionee has launched the S9 smartphone, the first Gionee phone to sport dual rear cameras, at an event in China on November 15th. It is a successor to Gionee S8 that was launched at Mobile World Congress in February and was later released in June this year. The Phone follows a typical guideline for phones in 2016 and considering the specs the phone sounds more like a “flagship wannabe” and less like a flagship itself. The phone that is priced at CNY 2499 (Rs. 39,482 approx) and comes in color options of Black, Gold and Rose Gold.

The phone follows the design guideline of its predecessor which can be easily said to look like the Apple-inspired design which is common for many Chinese phone manufacturers these days. The phone comes in a 7.4 mm thick metal unibody that has a home button with an integrated fingerprint sensor and two capacitive buttons for back and recent apps are on its sides. It has 5.5″ LCD display with 2.5D curved glass and offers the resolution 1080*1920 giving 401 PPI and 70.8% screen to body ratio. Under the hood, the phone is powered by 2GHz octa-core MediaTek (MT6755) Helio P10 processor coupled with 4GB of RAM. It comes with native storage of 64 GB and can be expanded upto 128GB via SD card in its hybrid dual Sim tray. It runs on Amigo OS 3.5 built on top of Android 6.0 Marshmallow. 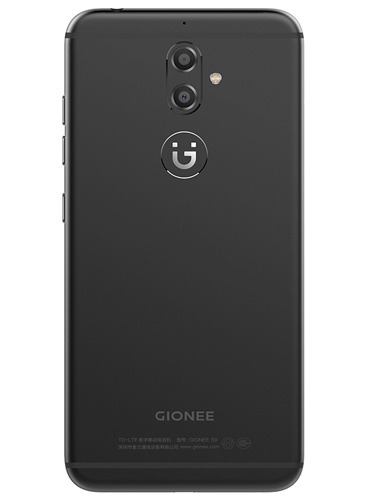 It’s the imaging department where the phone has a strong chance of coming in limelight. This time around, Gionee has decided to go on board with dual rear camera bandwagon. Since many phone manufacturers have been putting two lenses at the back instead of one as dual cameras can aid upto different features like wide angles, faster focus, optical zooming and better Bokeh effect. In this setup of vertically placed 13MP and 5MP that Gionee has come up with, is said to have added the advantage of focusing on production of the depth of field effect. The primary rear camera of 13 megapixel uses the camera sensor from Sony whereas the secondary rear camera of 5 megapixel uses that of Samsung. The selfies will undoubtedly come good with a 13-megapixel camera bundled with a Selfie flash.

The S9 weighing 168gm is found 20 gm heavier than its predecessor but the added weight doesn’t seem to upgrade the battery capacity which might be a let down to power users out there. Hence, the battery capacity of the phone is 3000mAh which is just same as the Gionee S8.

The phone will go on sale in China from November 25th and for the global release of the phone, we have not heard any officials words yet. Hopefully, in near future Gionee will launch this new phone in the market of Nepal as well. We can’t wait to see how well this first dual lens setup on any Gionee phone is gonna perform. Are you excited about what Gionee is offering in its new product? Do you think it’s worth an upgrade for those owning a Gionee S8 already? Please feel free to write down your opinion towards this newly released Gionee S9 in the comment section down below.