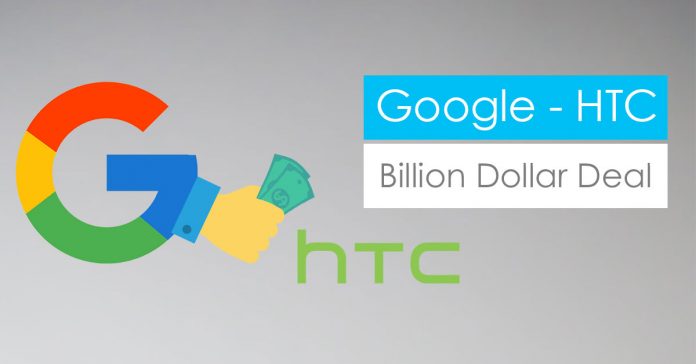 Google today made a deal with HTC worth 1.1 Billion Dollars in cash which could potentially push Google’s hardware to the next level. Google will get a non-exclusive license for HTC’s intellectual property meaning all the design and manufacturing patents of HTC will belong to Google as well.

With this deal, around 2000 researchers and engineers who have been working on Pixel lineup will be joining Google. That’s almost half the workforce of HTC’s smartphone division. This agreement seems to be beneficial for both the parties. HTC needs Google’s money to keep its boat floating and Google needs HTC to take its hardware forward.

HTC is currently in financial crisis as it’s failing in smartphone space against giants with deep pockets like Samsung. HTC’s market share has dropped from 8.8% in 2011 to 0.9 percent today. Google on the other hand for years has been dependent upon other manufacturers to build their smartphone lineup(Nexus). Google and HTC have a pretty long history. Their collaboration gave birth to the very first android phone, HTC Dream, and the first Pixel devices last year. They are also working on the 2nd iteration of Pixel devices which will be unveiled on October 4th.

Google’s intention on striking this deal is straightforward. They want to create their own smartphone that can compete with Apple both in terms of build and software consistency through updates. Google also bought Motorola in the past but once they realized it couldn’t compete with Apple with the resources at hand it sold the company to Lenovo. We can certainly predict Google schooling other manufacturers on how to get the hardware right and provide regular updates, once they start making their own smartphones. We may see a lot of Google manufactured smartphone in 2018!

HTC will also continue to manufacture their smartphones. But most importantly it will be investing more on the HTC VIVE virtual reality headset which is gaining a lot of popularity and could be “the VR headset” in the future.

“This agreement is a brilliant next step in our longstanding partnership, enabling Google to supercharge their hardware business while ensuring continued innovation within our HTC smartphone and VIVE virtual reality businesses,” HTC CEO Cher Wang