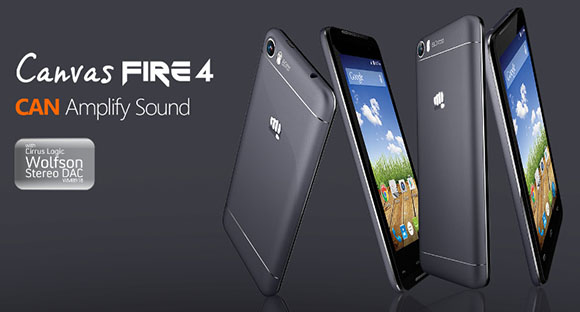 Micromax Nepal has officially launched Micromax Canvas Fire 4 A107 in Nepal for Rs. 12,925. We expect this phone to hold a good market since the other canvas series is selling out quite well.

Talking about the specifications of the Micromax Canvas Fire 4, it features a 4.5-inch FWVGA (480×854 pixels) resolution display with Corning Gorilla Glass 3 protection. Under the hood is a quad core CPU (unspecified chipset), 1 GB of RAM, 8 GB of internal storage with microSD card expansion up to 32GB.  For taking photos and videos, the Canvas Fire 4 sports an 8-megapixel rear with LED flash and a 2-megapixel front-facing camera. A 2000mAh battery provides the standby time of 300 hours according to the company.

The major highlight of the Canvas Fire 4 is it runs on the latest version of Android OS. It runs Android Lollipop 5.0 out of the box. The phone is Micromax first device to come with Android Lollipop pre-loaded. Like other Canvas Fire series, the Canvas Fire 4 has dual front-firing speakers, but this time the sound quality is enhanced with the Cirrus Logic Wolfsan Stereo DAC (WM8918) audio output.
In terms of connectivity, Micromax Canvas Fire 4 has dual SIM functionality, Wi-Fi b/g/n, Hotspot, Bluetooth 4.0, micro USB port, and GPS. The phone will be sold in two color options which include Black and Silver.