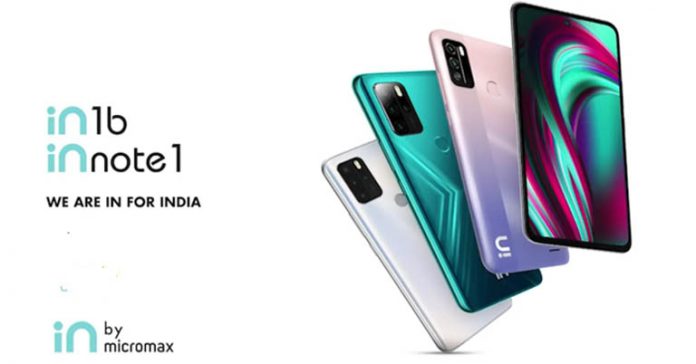 It’s official – Micromax is back in the smartphone business. Once a prominent player in South Asia, the company could not cope with the competition it faced from its Chinese rivals. And now, the company has tried to capitalize on the increasing anti-Chinese sentiment in India by introducing the new “IN” lineup. In this post, we will be taking a closer look at the new Micromax IN Note 1 and IN 1b, along with official specs, features, expected price, and availability in Nepal.

Micromax IN Note 1 is more premium of the two devices launched today. It sports a 6.67-inch IPS panel with an FHD+ resolution of 1080 x 2400 pixels. The panel features a circular cutout of a 4.6mm diameter that houses the front-facing camera. According to the company, the display supports up to 17 million colors and reaches up to 450 nits of brightness level. At the back, the phone has a rectangular camera bump to house the triple camera setup. There is also a fingerprint scanner close to it. Towards the bottom, the company has stamped the “in” branding. The device is available in two color schemes – Blue and White.

IN Note 1 is powered by Helio G85 SoC. The gaming-centric budget gaming chipset from MediaTek features two Cortex A75 cores (@2GHz) paired with six Cortex A55 cores (1.8GHz). Similarly, the graphics are handled by Arm Mali-G52 GPU. The device comes with 4GB of RAM but users can choose between 64GB and 128GB of internal storage. IN Note 1 ships with stock Android 10 and Micromax has promised up to two years of upgrades.

Likewise, the phone has a quad-camera setup. The 48MP primary sensor is accompanied by a 5MP wide-angle camera with a 115-degree of Field of View. Completing the setup is two 2MP sensors for the macro lens and depth effect, respectively. For selfies, Micromax has included a 5MP selfie camera with 78-degree of FOV.

The device gets its juice from a 5000mAh battery, which the company claims can provide up to 960 hours of standby (on a single SIM). Micromax is including an 18W charger in the box. The device also supports reverse charging. For biometrics, there is a physical fingerprint sensor but users can also opt for the face unlock feature. The device supports dual-band Wi-Fi and Bluetooth 5.0.

Micromax IN 1b Overview

Micromax IN 1b sports a smaller HD+ display with a diagonal length of 6.52-inches. The device has a water-drop notch on the front that houses the selfie camera. The rear panel has a dual-tone design thanks to the strip that runs down the length of the device from just above the rectangular camera module. The strip also includes the “in” branding towards the bottom. The rear panel has a matte finish and is available in three color options – Blue, Purple, and Green. IN 1b is powered by MediaTek Helio G35 chipset. Users can choose between 2+32GB and 4+64GB storage variants. The dual-camera setup on the back of the device includes a 13MP primary camera accompanied by a 2MP depth sensor. There is an 8MP selfie camera on the front.

The device packs in a 5,000mAh battery with support for 10W fast charging via USB-C connection. Like the Note 1, it comes with a rear-mounted fingerprint sensor and a dedicated Google Assistant button.

Micromax IN 1b Specifications:

Micromax IN Note 1, 1b Price in Nepal and Availability