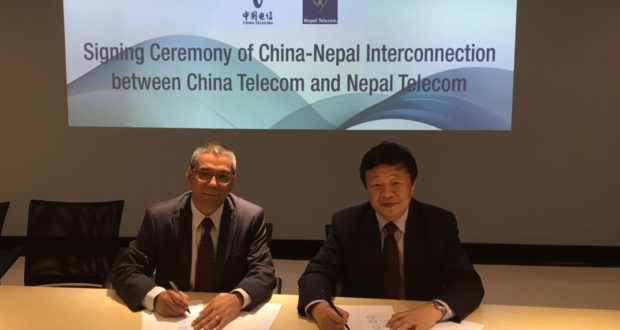 Signing Ceremony of China-Nepal Interconnection between China Telecom Global (CTG) and Nepal Telecom (NT) was held on December 7th, 2016 at a formal program in Hong Kong. This new inking of a deal has officially ended Nepal’s dependence on India for global data and voice traffic. With this new agreement, China Telecom Global will be providing IP services in Nepal through newly launched terrestrial cable route connecting two nations via Jilong-Rasuwa Gateway.

Chief Technical Officer of NT Lochan Lal Amatya and Executive Vice President of CTG Ou Yan signed this agreement at a formal program in Hong Kong, yesterday. This agreement has made it possible for Nepal to purchase Internet Bandwidth from interested Chinese firms. Until now, different companies from India and other countries were selling bandwidth to Internet Service Providers in Nepal.

In the event, Ou Yan, Executive Vice President of CTG, said, “China Telecom is dedicated to expanding our footprint by connecting with neighboring countries. The China-Nepal route could provide service to Nepal and transit service from India. China Telecom has put tremendous effort into building the route through the Himalayas. We are committed to delivering a state of the art route for Nepal Telecom.”

Hence, The new China-Nepal route is unparalleled as it is a new direct alternative route for traffic demand generated from Nepal to all over the world and provides the highest quality service and low latency solution for end users in Nepal.

Is this new terrestrial connection gonna benefit only service providers? Will it bring some noticeable changes at consumers’ level or not? That is something, yet to see.