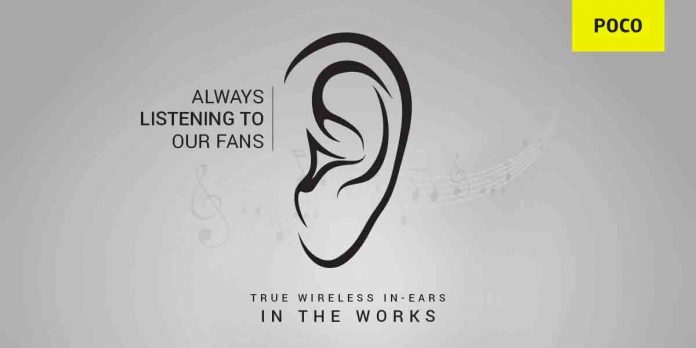 Up until now, we have only heard about smartphones from the Poco brand. The brand which started off as a sub-brand of Xiaomi had huge success with the Poco F1. The success was so huge that even the company itself is finding it difficult to come with a device to build on top of that success. While Poco may be working on a successor to the F1, it looks like it isn’t the immediate focus at the moment. Poco has revealed that it working on a True Wireless Stereo (TWS) earbuds that is likely to launch in India later this year.

Check out our review of Poco F1.

It all started with a twitter poll. Poco India’s General Manager, C Manmohan took to his official twitter handle to ask the fans what would they like to see from Poco except for smartphones. The options included TWS earbuds, headphones, fitness bands, and gamepad. The poll ended with TWS earbuds accumulating about 38% of the total votes ranking ahead of second-placed headphones that gathered 23% of the votes.

The result was announced via Poco India’s official twitter handle where for the first time they announced that the TWS earbuds are on the way. The company also confirmed that the Poco TWS earbuds will first launch India. 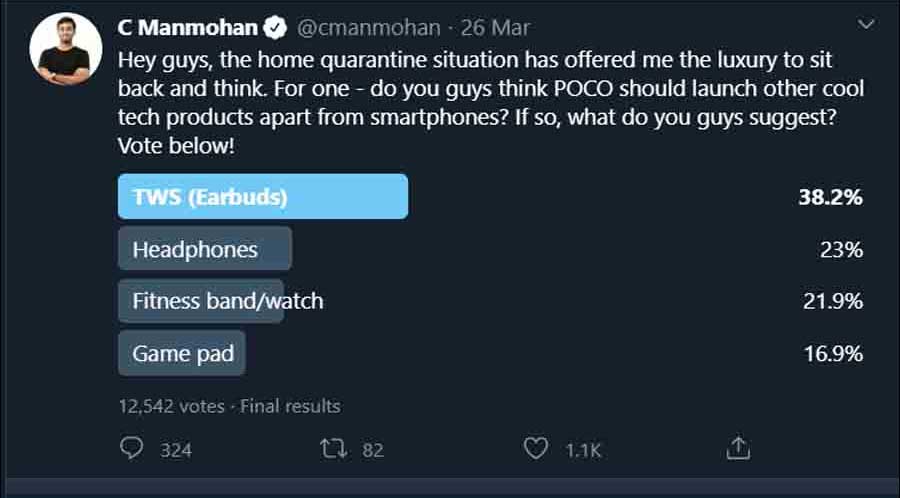 The company hasn’t mentioned any other details about the specifications of the product.  There are mixed feelings among the fans after the announcement. First – Poco TWS earbuds aren’t the thing that the fans are waiting for. They want a true successor to Poco F1 which puts the brand in the world map. Second – what if the Poco TWS earbuds do not turn out to be original Poco products at all. After the spin-off of Poco as an independent brand, people expected them to launch the much-awaited Poco F2. However, they rebranded the Redmi K30 and launched it as Poco X2 in India. So, fans are skeptical about Poco’s upcoming TWS earbuds being one of Redmi’s available with few or no tweaks at all.

Check out our review of Poco X2

We are still waiting for the successor to Poco’s true flagship killer – the Poco F2. It was supposed to be the first phone after the spin-off. However, it is still unclear if we are going to see it this year. After the launch of Poco X2, people speculated that the Poco F2 will be a rebranding of Redmi K30 Pro. But C Manmohan has clarified that the Poco F2 won’t be a rebranded K30 Pro. There is no further detail of the product but to carry on the legacy of the Poco F1, it must come with Snapdragon 865 and other top-of-the-line specs.

We did see the Poco F1 land in Nepal via different e-commerce sites in Nepal. But since the spin-off of Poco as an independent brand, it has made the matter more complex. Xiaomi Nepal can’t bring in the products and there is no authorized distributor for Poco products. On top of that, Poco hasn’t dropped any hint or intention about expanding the market beyond India for now. So, it’s safe to say we won’t be seeing any immediate official launch of any Poco products in Nepal.

Check out our long term review of Poco X2 here!