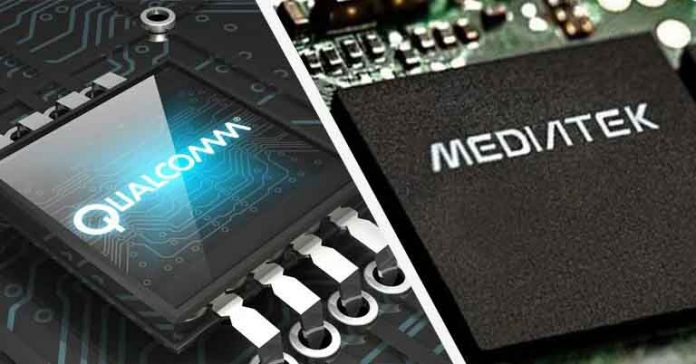 It is always fascinating to know what chipmakers are up to. After all, their products are powering your device. Thus, what they produce has a huge impact on smartphones. The major force in this industry is undoubtedly Qualcomm. Its latest Snapdragon 865 processor currently powers most of the flagship while the new Snapdragon 865+ powered phones will be hitting the shelves pretty soon. And not much behind is MediaTek. So let’s take a look at the leaked roadmap of Qualcomm and MediaTek. Qualcomm will obviously follow up on its flagship Snapdragon 865 by releasing its successor. The first quarter of 2021 is the scheduled release date of Snapdragon 875G. This chipset is based on Samsung’s 5nm EUV process. And the rumor is that TSMC will be manufacturing the silicon. However, surprisingly there’s no mention about the already-confirmed Snapdragon 865+ processor anywhere in this report.

Anyway, other than the 875G, Qualcomm will most likely launch another mid-range chipset. It will be the Snapdragon 735G and it too is based on Samsung’s 5nm EUV process. Furthermore, there’s a rumor about an entry-level 5G chipset in the form of Snapdragon 435G.

Moving on, MediaTek has some projects ready to be launched too. This year, we will probably get to see Dimensity 600. It is based on a 7nm process and will support 5G. And the chipset will release sometime around the third quarter this year.

The most interesting one, however, is the Dimensity 400. This chipset is scheduled to launch around the turn of the year. Information about the Dimensity 400 is still scarce. However, we do know that it has been listed as a 6nm chipset. Speculation is that the chipset will combine both 7nm and 5nm elements. Also, there’s a mention of a flagship SoC from MediaTek. It will release during the second quarter of 2021 and will be a 5G enabled chipset based on a 5nm process.