Home Android Remix OS Singularity: Use Android on PC by Plugging in your phone For those who want to use Android on their desktops and laptops, Remix OS has been an option for a while now. People who own underperforming budget laptops that they use for typing, watching movies, surfing webs and all the other basic kinds of stuff, Remix OS can be a pretty good alternative. Instead of hassling with the emulators, if you really want the android experience and the material design goodness on your PC, you can read our Remix OS guide. 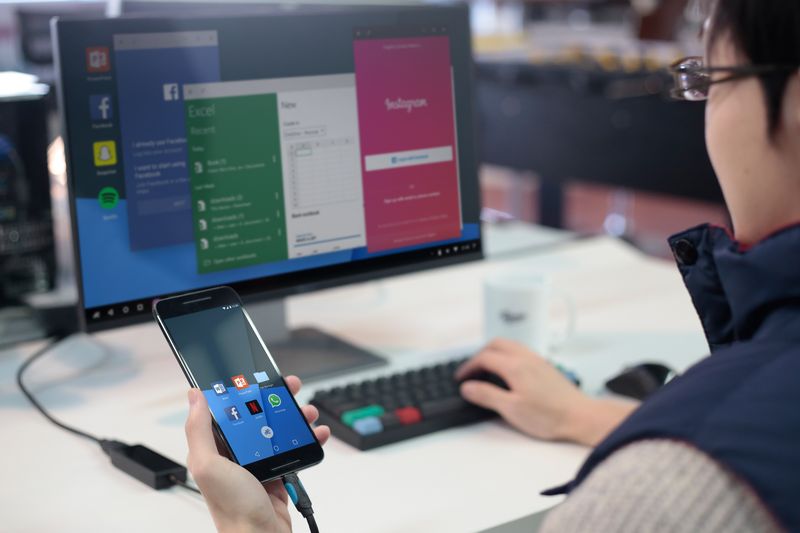 Remix OS Singularity is the evolution from Remix OS on your computer to the OS on your Android Smartphone. It will be installed on your phone as a custom ROM which will function like the regular android and may offer some tweaks as well. But the best part of the OS is when you plug-in your android to the monitor or your laptop you can directly start using the Remix OS optimized for wide screen monitors along with your keyboard and mouse. You can also use the TV mode where you can get the full-fledged Android TV experience.  The concept of Remix OS Singularity is pretty much like Microsoft’s Continuum where you can plug your Windows phone on a monitor and start using windows instantly.

Remix OS Singularity will provide the normal desktop experience with the taskbar, start menu and free-form windows which you can easily move around. If you are using some apps on your phone, you can continue where you left off after plugging the phone into your monitor. And the things you were doing on your monitor, you can continue them on your phone. This redefines the meaning of mobility and could be the future of computing if phones keep getting powerful like this. Remix OS can also land as an official smartphone OS in the future as the company is partnering with some smartphone manufacturers.

Smartphones that are available today have almost pretty close computing power of a normal laptop. We are even seeing phones that have more RAM than a computer and for instance, you can almost do everything on your phone that you can do on your computer. Remix OS Singularity can be the bridge between your smartphone and PC enabling an easier transition between the two. Remix OS Singularity is scheduled for 2nd Quarter of 2017 and is definitely something to watch out for.