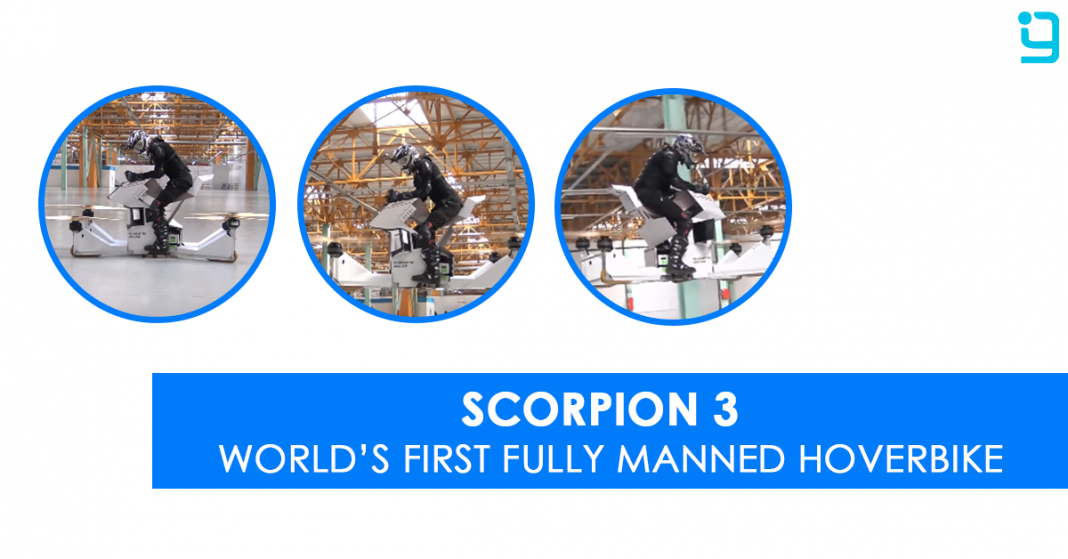 When it comes to the word “Hover”, it is a fascinating one in the tech industry. We have been seeing many concepts and prototypes on the internet. But, very few seemed near to perfection and reality. Out of all those, the E-hang seemed impressive right from its introduction. We’ve been seeing E-hang being showcased in three CES in a row right from 2015. E-hang, fully autonomous flying vehicle that can transport one passenger has been getting a lot of attention since its first introduction in 2014.  But, Hoversurf, the Russian startup, is now becoming the next name to be taken when taking about the hoverbike. The company has recently released the trailer of its coming commercial hoverbike on YouTube. It is the first of its kind that lets a man fly it just like one rides a motorbike.

Scorpion 3: You can fly it but should you?

The Scorpion 3, the World’s first manned hoverbike, boasts the frame design of a dirtbike. Instead of wheels, it has four propellers just like any other flying drones. The best part is, the man flying this aircraft will have full manual control. The rider (or should I say the pilot) can surf in the mid-air, take turns and accelerate up to the speed of around 50km/hr. Moreover, the craft is designed to fly as high as 10 meters.

This air-borne electric powered craft runs on in-house software that has different safety programming embedded in it. This single seated quadcopter can carry a weight of up to 120kg. Flying the Scorpion 3 looks thrilling but is it safe? That’s the real question to be answered.

Scorpion 3 from the Hoversurf
1 of 4

At the end of the day, I think it’ll be safe to say it is a drone that can fly a man with it. Well, drones, we’ve seen many releases and many came with the issues. Take, for example, the Karma drone from GoPro which was recalled after 16days of its release. The drone started falling out of the sky for no known reason. What will happen when the Scorpion 3 will have such issues? The damages such issues are gonna create are unthinkable. We’re talking about lives here. Plus, those sharp metal propellers rotating at such speed could easily chop off your legs. So, for those excited to ride on Scorpio 3 when it becomes commercially available, all I wanna say is just think twice.