Here, you can find all the latest Acer Swift laptops, along with their specs, features, price, and availability in Nepal.

Acer Swift laptops are designed to be ultra-thin and portable. They are also equally stylish. That being said, they do not compromise on performance and productivity.

Acer Swift 1 is the entry-level model in the Swift series. It is powered by an Intel Pentium processor and thus is suited for basic tasks only. It also doesn’t feature active cooling either. Newer models come with FHD IPS panels, Wi-Fi 6 connectivity, fingerprint scanner, and other modern features.

Acer Swift 3 is a step up from Swift 1. It is also the one that you are most likely to get stumble upon in the market. Acer Swift 3 is available in three display sizes: 13″, 14″, and 16″. However, the 16″ is not that popular. Swift 3 laptops feature metal chassis and colorful lids. New models also feature an air inlet keyboard, stereo ring fans, and multiple performance modes. Some of these laptops even have Intel’s EVO certification.

In 2021, Acer even launched a Swift 3X mode. What makes it stand out is that it packs Intel’s dedicated GPU with dynamic power-sharing.

On paper, there is not much difference between Swift 3 and Swift 5. However, on closer inspection, the latter comes put as a more premium offering. Swift 5 has better build quality, thanks to its magnesium alloy chassis. You also more color-accurate IPS screen, and some even feature Gorilla Glass protection.

Acer introduced the Swift X back in 2019. Back then, it was promoted as the thinnest and lightest laptop. Swift 7 sports Magnesium chassis that is more durable than aluminum. Another standout feature of Acer Swift 7 is its ZeroFrame Display, which is named so because of its four-sided narrow bezel display. It also has Corning Glass 6 protection.

Swift X is the latest model in the lineup. With this, Acer is targeting content creators. It is available with Intel and AMD processors. Both can be configured with up to RTX 3050 Ti GPU. As for the display, the Intel variant has a 16-inch panel, while AMD settles for a 14-inch panel. Both use an FHD IPS panel with 100% sRGB coverage. Acer Swift X also has DTS Audio with AI noise reduction technology. 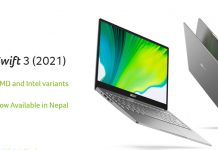 Sanjeev - December 7, 2021
The 2021 iteration of Acer Swift 3 is finally available in Nepal. Just like last year, it is available with the latest processors from... 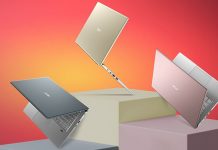 Sanjeev - November 3, 2021
Acer's Swift lineup is famous for the thin and light Ultrabooks suitable for homes and offices. However, the company has lately added some devices... 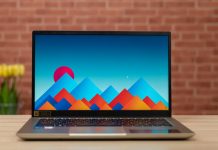 Intel will be launching its own line of Arc-branded consumer-grade graphics cards next year. However, you can try out Intel's dedicated GPU now if... 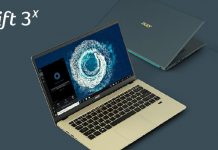 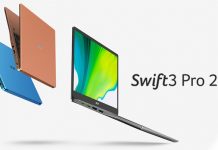