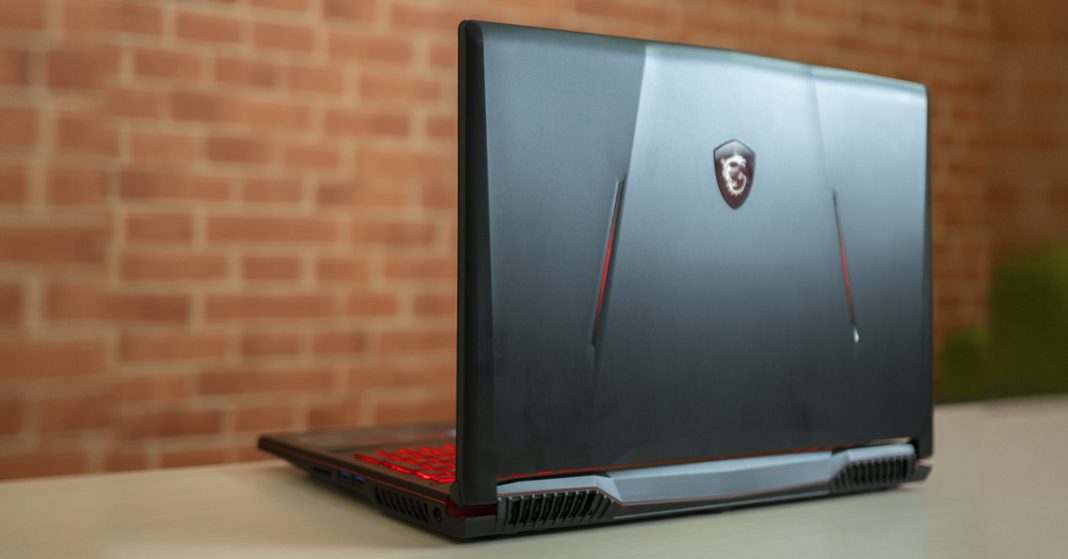 When you think MSI, you mostly imagine high-end specs and the most powerful of gaming laptops. But, MSI also makes gaming laptops with modest specs targeted towards budget buyers. It’s their GL-series that comprise of such machines. And the latest addition to the GL-series is the MSI GL63 9RDS. Yes, that is a mouthful, but this laptop is not widely available. It is limited to some regions, only. However, this is available in Nepal, for a price of Rs.145,000, which is probably equal to some $900 to $1000. And is it worth this price? Find out in this MSI GL63 9RDS review.

I can’t exactly call it a strictly budget gaming laptop, but you can’t really get a lot of budget gaming laptops in this price. And for this price for a MSI laptop, there are bound to be some compromises. You’re not wrong, really. It actually features the latest 9th-gen i7-9750H processor, which is fantastic! To pack such a processor for the price is simply great. But the compromise lies in the graphics department. Because, what you get is the modest GTX 1050 Ti in it. And that is a kind of a bottleneck on its part because while the laptop is capable of running processor intensive apps like Adobe Premiere Pro, Photoshop, Lightroom, and such, without many hiccups, gaming takes a hit. The GTX 1050 Ti might have been a middle of the line graphic card back in 2018, but right now, it’s outdated, and even though you will be able to play most games on it, you’ll have to do so in the modest settings.

Games like Battlefield V was playable in Medium settings and gave me about 40 – 50 frames per second on average. While the game is playable, that’s all we can expect from the 1050 Ti, As for Apex Legends, it was playable in Medium settings in the same frame rates of 40-50. So, you have to stick to games like CS:GO to get frame rates over 100 in High Settings.

And here, the GPU is clearly the bottleneck because while gaming, the GPU is running at max, while the CPU is barely at around 20%. So, this gaming laptop actually does other things better than gaming, which is odd, but given the choice of GPU, it is to be expected.

But the choice of GPU also means very less pressure on the CPU. And that means less heating up. Because even during long hours of gaming, the MSI GL63 9RDS didn’t really heat up that much. It could have been the fairly low usage of CPU compared to the GPU, but safe to say, you’ll rarely get heating problems. I never had to turn on the Cooler Boost on during my usage. However, even without the heating, long hours can stress out the GPU, and you might face some throttling.

So, this laptop is more of a heavy workhorse than a gaming rig. You could do video editing and content creating, but that is again, limited by the choice of the display panel.

What the MSI GL63 9RDS packs is a 15.6″ Full HD display, with a TN LCD panel. And that makes for not-so-good viewing angles, and average color distribution and accuracy. So, the screen is another bottleneck for content creation. However, the screen is more than enough for gaming, or regular media consumption. Besides the viewing angles, other aspects of the display are fairly good. The brightness is there, and it can make your movies and pictures look good. Also, the screen has considerable bezels around the sides, but that’s okay because so does every other gaming laptop around this price category.

As for the design, the MSI GL63 9RDS follows your typical budget gaming laptop design, which is very similar to the MSI GL63 8SE. It is big, kinda bulky and the build is plastic. With that build, the weight is at 2.2 kg, which feels like the standard weight for a gaming laptop of this caliber and build. The top lid has a smooth matte finish, but this one attracts fewer fingerprints, and even then, the finger smudges are not clearly visible. Rest of the design footprint is still the old classic MSI. You have two air vents at the back and both sides of the body. The lid has two red strips, which do not glow, and the MSI Dragon shield which glows when turned on – nothing new. And even inside, the design remains unchanged. You get the standard keyboard layout with extra keys on top for the cooler boost fans and the Dragon center.

Even with a plastic build, there is very less flex on the keyboard deck and surrounding areas, but the lid does flex quite a bit. Maybe it is prone to some durability issues, especially on the lid. And another thing is, you can’t open the laptop single-handedly, which is important very some. So, this is something that gives a gaming vibe but doesn’t scream gaming like others. And there’s nothing fantastic about it either. This just seems like an old MSI laptop with a new processor.

But MSI’s gaming laptops come with a great selection of ports. You get plenty of them – three USB As, a USB-C (without Thunderbolt 3), a MiniDisplay port, an Ethernet port, an HDMI, an audio-in and audio-out, and an SD Card slot.

Another good thing about this laptop is the loudspeakers. MSI’s Giant Speakers make their presence here as well, and the giant speakers are plenty loud. Even with the fans running on full throttle, you can hear your music videos or game sounds. But these loudspeakers are prone to some distortion in very high volumes. 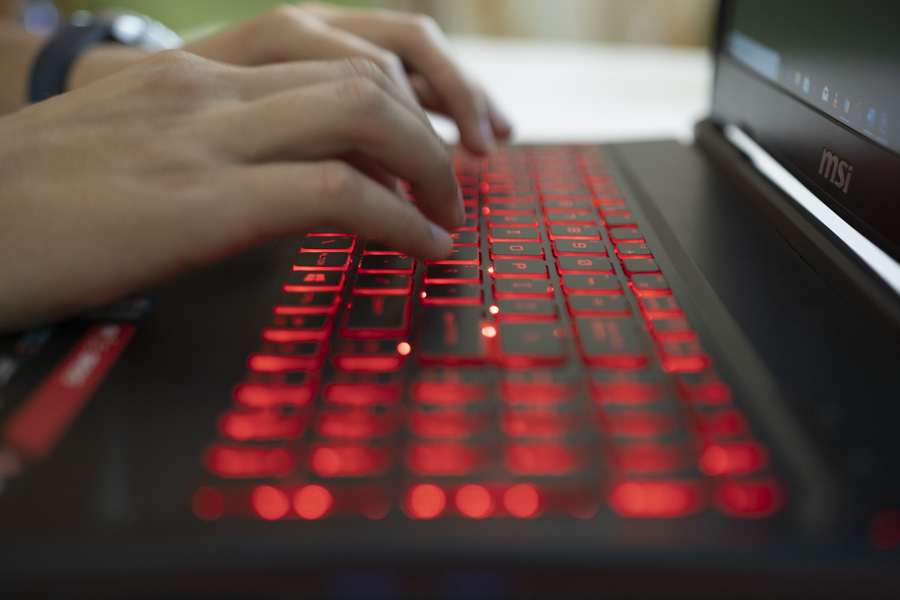 Moving on to the keyboard, the MSI GL63 9RDS packs a SteelSeries keyboard, so, you know what to expect. But MSI’s budget gaming laptops don’t get the full RGB individual key backlighting treatment. You only get Red backlighting, 4 levels of it, actually, and there are no programming individual keyboards, either. 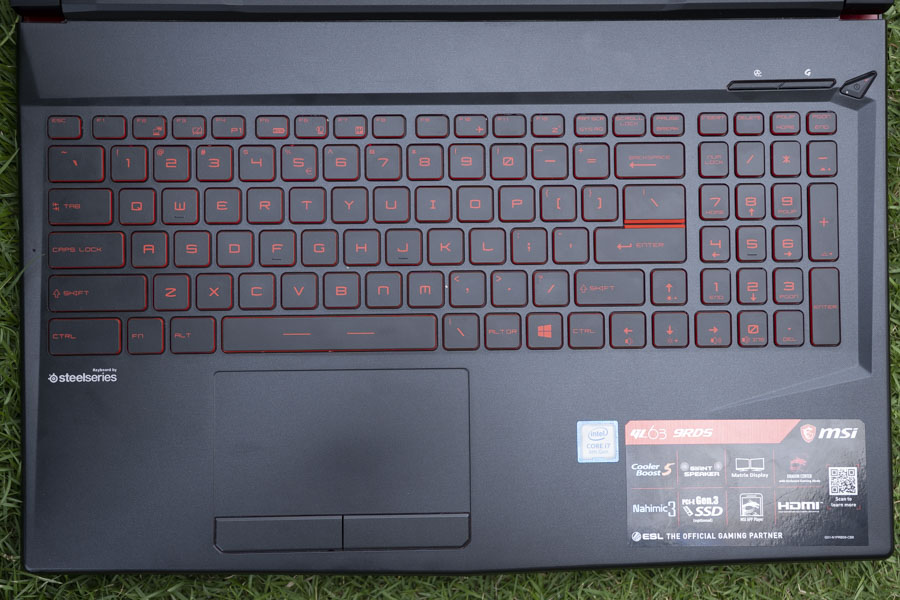 But, still, SteelSeries keyboard is still one of the good ones out there. The keys are soft but provide good tactile feedback. There’s a right amount of mushiness to it and ample key travel. Overall, typing experience and gaming are good enough, though not as good as on higher-end MSI gaming laptops. However, you can’t say the same for the trackpad. Not the worst trackpad I’ve ever used, but this is a serious compromise on MSI’s part. Tracking is okay, but sometimes, can take a lot of effort. Scrolling with it is a pain in the neck, and gestures are a hit or miss. Sometimes they work, and sometimes, it takes some more coercion.  So, do yourselves a favor, and use an external mouse.

In terms of memory, there’s 8 GB of RAM, but only in a single channel. 8 GB is enough for the most part, given the kind of gaming you’ll be able to do on it, but if you want to upgrade, you do have a second slot, though. So, if you put another 8 GB stick in there, that dual channel memory might improve the performance even further. As for the storage, you get a 128 GB NVMe PCIe Gen 3 SSD, and a 1 TB hard drive.  The SSD is pretty fast as well, giving close to 1500 MBPS of read speeds, and about 400 MBPS of write. It’s not the fastest, but more than enough. Of course, the 128 GB might not be enough, so, you have to stick to having only Windows and the most important of software in there. For the rest of it, you get 1 TB Hard Drive, so, there are no problems regarding the storage here.

Batteries are not the strong suit of gaming laptops, and it’s the same with this MSI GL63 9RDS, too. You get a small 41 Watt-hour battery which will last you like 2.5 hours on normal usage, but maybe close to an hour for gaming. So, you’ll have to carry your charger around if you’re taking it places.

The MSI GL63 9RDS, to me, looks like a strange combination of parts. It is targeted as a gaming laptop, and they certainly did include the processor for it. But they compromised major on the graphics card, which actually bottlenecks even the CPU in terms of gaming.

And if the aspects like the display were better, you could turn it into a content creator’s laptop, too. However, the screen is not good enough for that. So, what this laptop essentially is, is a workhorse on the most part for those who need to do some heavy lifting like MATLAB or a lot of programming, or 3D modeling and stuff, with some occasional gaming in there.

Honestly, for a price of Rs.145,000 in Nepal, I applaud the choice of CPU, but I would’ve been happier with an 8th gen processor with a better graphics card, at least an RTX 2060, or maybe a GTX 1070, even. So, this is not your mainstream gaming laptop, but a quite powerful one.