So with the rising popularity of games like PUBG and Fortnite on mobile, the rise of Gaming centric phones was inevitable. And so, gaming computer companies like ASUS and Razer stepped into this zone. The Razer Phone from last year, as many said, was a mixed bag. But this time around, the Razer phone 2 seems to fulfill all the shortcomings. And while it stands, is it the perfect gaming phone?

The Razer phone 2 comes with a very identical design to last years. It sports the same boxed design and thickness. But this time, it’s a glass back which is for the wireless charging, that the phone supports. And the glass back makes it look even more premium. Plus, it has Gorilla Glass 5 protection and IP67 Water Resistance. The fingerprint sensor rests on the power button, too. The identical design also means it has the same front-facing giant speakers that support Dolby Atmos sound. But even with the IP67 rating, the speakers keep up their great audio quality.

What’s more? The Razer logo at the back glows! That too, with customizable RGB chroma colors! You can change it to the way you want it, and the company claims that they even double as notification lights. How cool is that? For some, that may be a gimmick but it’s a gimmick I like. 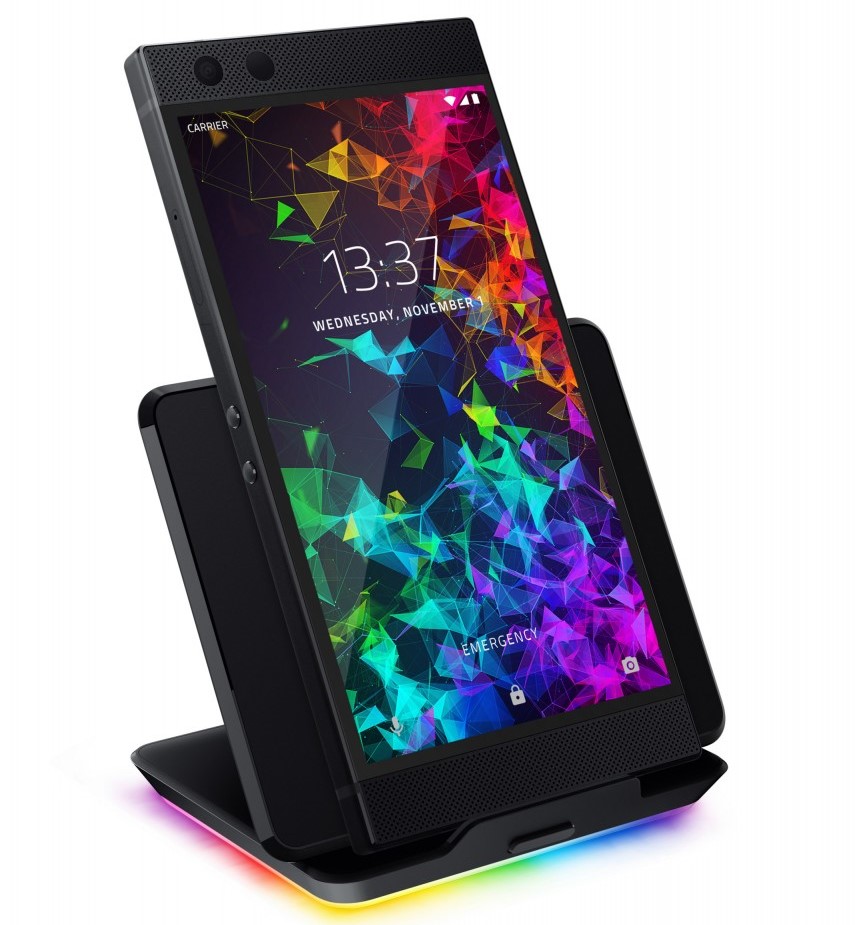 This phone has a 5.7″ IGZO IPS LCD Quad-HD display with 16:9 aspect ratio and 1440 x 2560 resolution. The world may be moving to larger 18:9 aspect ratios, but Razer stands its ground. But it has the large speakers and no notch to speak for it. Plus, with its QHD display and 120 Hz refresh rate, the display is very smooth. That is more than enough for some of the best gaming experience. Also, the screen is now 50% brighter, which maxes out at 580 nits. In addition, the IGZO display type consumes less power while allowing smoother transitions.

The cameras on last year’s Razer Phone weren’t anything to mention. But the Razer Phone 2 has significantly improved the cameras. Its dual cameras consist of a 12 MP regular lens with OIS and another 12 MP sensor with 2x Optical Zoom. The selfie camera is an 8 MP shooter that is capable of taking Full HD videos at 30fps.

As for performance, being a gaming phone, it has all the flagship specs. It comes with the Snapdragon 845 chipset, with the Adreno 630 GPU. Combined with its 8 GB RAM, you can bet that it is a powerhouse. One that’s just right for all that heavy mobile gaming. Also, it has 64 GB internal storage but also has a microSD slot which allows you to expand it up to 1 TB. Plus, this phone has a Vapor Chamber cooling system for better thermals. This should keep the phone relatively cool during your intense gaming sessions. Furthermore, a large 4000 mAh battery should last you for quite some time for your gaming.

This phone runs the stock Android 8.1 still. The Razer Phone 2 has no headphone jack, just like last year, but that’s the only off-putting factor I can see on this smartphone. But it comes with a USB-C dongle. Overall, this phone is built to be a powerhouse for gaming, but it also has all the necessary features for the average joe as well. And with a crisp 4K display, and those speakers, media consuming is also going to be a treat. What’s more? This phone costs $800 only, and I say only because that’s less than most of today’s flagships!