Realme’s 6 series, that was launched earlier this year, already has a successor. Like its predecessor, the Realme 7 series was launched in India via an online event. The series consists of two smartphones – Realme 7 and 7 Pro. In this post, we will be talking about the specs, features, expected price, and availability of Realme 7 Pro in Nepal.

Realme 7 Pro is not an upgrade over the Realme 6 Pro. It looks like an alternative instead. In the Realme 6 series, the focus was on the display and the camera. However, the biggest difference in the 7 Pro is in the charging technology. 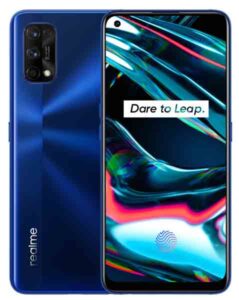 This time around, the company has brought a new design which they are calling AG Split Design. It is said to be inspired by symmetries found in human society and nature. It has a dual-done color separated by a straight line that passes through the camera module. The back panel of the Realme 7 Pro has an anti-glare layer. Realme has actually made the 7 Pro lighter than its predecessor (182g < 195g). However, it also means the device is thicker at 8.7mm.

Realme 7 Pro features a 6.4-inch display with a punch-hole that measures 3.69mm. It boasts a screen to body ratio of 90.8%. Realme has finally made a switch to the AMOLED display panel. However, it comes with the standard 60Hz refresh rate. The panel on the Realme 7 Pro covers 98% of the NTSC color gamut.

Realme 7 Pro is powered by Qualcomm Snapdragon 720G. It is the same chipset that we saw in the Realme 6 Pro. However, it’s a capable chipset in the mid-range and it won’t disappoint in the performance segment. It is available in two memory-configurations – 6/128GB and 8/128GB. 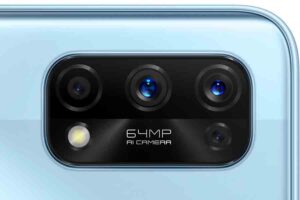 The Samsung GW1 sensor is now replaced by Sony IMX682. The 6P lens has an aperture of f/1.8 can supports up to 10X zoom. To aid the sensor, Realme has also introduced a multi-frame algorithm with improved detail reproduction.

The company claims that the zoom performance of the Realme 7 Pro is on par with the 2X telephoto lens. Thus, the telephoto lens has been ditched for a monochrome portrait sensor. The rest of the setup is similar to the Realme 6 Pro, including the 8MP ultra-wide sensor and a macro lens.

On the front, Realme has used a 32MP selfie camera. It has an aperture of f/2.5 and comes with features like Nightscape selfies and UIS Stabilization. 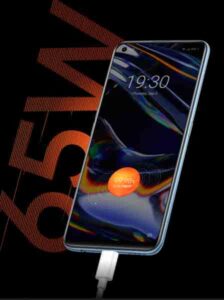 In the online launch event, Realme expressed its desire to revolutionalize the way smartphones are charged by bringing faster-charging technologies in the mid-range segment. The 4,500mAh battery in the Realme 7 Pro consists of two 2250mAH 3C batteries connected in a series. Realme 6 Pro came with a 30W fast charger. Its successor now supports 65W SuperDart Charge. It can charge the 4,500mAh from 0 to 100% in 34 minutes. Similarly, 3 minutes of charging can last for up to 2.5 hours of Youtube or 2 hours of Instagram or 1.2 hours of gaming.

To control the temperature while charging, Realme has included an intelligent five-core chip along with 10 temperature (2 on the mainboard). The company claims the temperature of the device is maintained under 40-degree Celcius when charging in standby mode.

Realme 7 Pro comes with a dual-speaker. The device supports Dolby Atmos and is Hi-Res Audio certified. We have seen smartphone brands get TUV Rheinland certification for certain components of the phone. However, the Realme 7 series is the first phone to pass TUV Rheinland Smartphone Reliability Verification test.