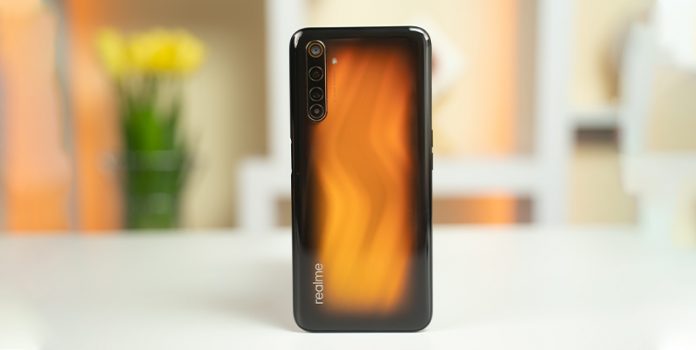 Realme’s number series has always been popular for the value for money they are. But if we look back at the last-gen Realme 5 Pro, it was lacking some way or the other behind the likes of Redmi’s and their own X-series of lineups. This time though, the company has brought a good number of changes including a 90Hz display. But, are those changes enough to make the Realme 6 Pro competitive in the current market? Let’s find out in this Realme 6 Pro Review!

This time Realme has opted for a glass body rather than plastic, which is an upgrade we are definitely glad to have. The back and the front both are protected by Gorilla Glass 5 which has stood up well during my usage. The cameras are placed in the same old fashioned Realme style but it’s nothing to complain much.

Something interesting is going around at the back as it forms an ‘s’ when tilted in certain angles which looks cool. The only complaint there is with the phone is a bit heavy and boxy which might create some difficulty if you are used to a compact device. Otherwise, it’s all good with the design on the Realme 6 Pro. Realme also claims to have 3 layers of waterproofing on this phone. But since it doesn’t have any official IP rating on it, I did not take chances and would advise you to do the same. However, what we can say is, the phone can take on a few minor splashes, which for this feature is good enough for its price.

Also, the protruding rear cameras create a noticeable bump when placed on a flat surface. So, the use of the case that comes inside the box is highly recommended.

There is a power button on the right side which doubles as a fingerprint sensor. And I am very satisfied with its performance – it’s swift, accurate and gets the job done. You can program it to work with a slight touch or a press from the settings and therefore can have it the way you want. Additionally, there is the face unlock option as well which is fast like with other Realme phones. At the front, the Realme 6 Pro features a 6.6-inches IPS LCD display with a taller 20:9 aspect ratio and a 90Hz refresh rate. The quality of the panel is good like any other LCD at this price. Also, the higher refresh rate display makes for swift display experience. But It will be fair to say that one might miss the deep blacks of an AMOLED panel. Even in Realme India’s own survey, people voted for an OLED display as the most important feature among other things, in a smartphone worth INR. 15,000.

Well, that’s a never-ending debate: Do you want a Super AMOLED 60Hz panel or the IPS 90Hz panel. On a different note, a big change from its predecessor in terms of the display definitely has to be the dual punch holes. Although this implementation does not look very good, since there are two different focal length cameras upfront, it’s okay! Keeping that aside, one minor inconvenience about the display is that I found myself wishing for more brightness when using it in a well-lit outdoor environment.

One of the most significant changes the Realme 6 Pro brings is the internals. While the Realme 5 Pro had the Snapdragon 712, this one features the new Snapdragon 720G. And needless to say, the 720G is a better SoC overall – be it in performance or energy efficiency. The chipset works well while you game, multitask, and during normal usage. Apps launch impressively fast and so is navigating through the phone.

Games like PUBG and COD can be cranked up to high settings with HD graphics and played with only a few stutters here and there. Thankfully, the phone does not heat while gaming either. It does get a little warm when gaming for a long time, but nothing that might raise concerns, so that’s really nice!

Testing it out against the Poco X2 which has the Snapdragon 730G to see which chipset works better. I found that both chipsets do the job almost equally well. Multitasking tests between the phones resulted in a neck to neck outcome. And even playing games feels no different in both of these phones, which makes sense as these chipsets are very similar in architecture. Although benchmarks show that the 720G wins both in CPU and GPU performance. In real life, however, both chipsets do a similar job. But, since the 720G is a recent offering from Qualcomm, it supports the latest Bluetooth 5.1 and Dual-frequency GNSS GPS.

Moving on, supporting the performance is either 6 or 8GB of RAM. The phone comes with 64 or 128GB UFS 2.1 internal storage but if that does not seem enough for you, you get a dedicated MicroSD card slot for expansion too!

While we are still on performance, the new Realme UI based on Android 10 on the 6 Pro seems much better than last year’s ColorOS in terms of looks although the functionality is not much different. The good thing is you can customize the icons to the way you like. The notification shade pulls down to the bottom with a quick swipe down from the home screen like Samsung’s which is another thing that’s good about it. Having said that, this is a pretty heavy UI but Realme’s optimization seems good this time as the phone does not feel laggy or anything like that. In fact, the 90Hz refresh rate of the screen makes for even faster smartphone experience.

Moving on, another upgrade here is the cameras. Honestly, getting the same quad-camera setup every time in every new phone of Realme has been pretty boring. Thankfully, the company is passed that, and with the 6 Pro, we have a few notable changes. For instance, there’s no depth sensor anymore and instead, we get a 12MP Telephoto lens. This makes the Realme 6 Pro the cheapest phone with a zoom lens. A macro lens is still there, which, well, I have never valued so much on a smartphone. They look washed out and bland. But if you are someone who is into macro images, make sure you are in a very lit condition to get useable images. Also, the software-based portrait images are not that bad. Actually, it is good enough to prove that phones don’t need a gimmicky physical sensor for depth effect. Though sometimes it does miss out on proper edge detection in difficult areas, you can give it the benefit of the doubt!

The 12MP Telephoto lens works quite well too. It can go up to 2x optical zoom and the images are quite nice and detailed. Even the 5X zoom is not that bad provided there is enough light! You can go up to 20x digitally as well.

The primary 64MP images are impressive too. Realme has always stood out when it comes to camera optimization, especially the color aspect and this phone shares the same story.  Additionally, the HDR ability is decent and detail- preservation is done well.

Wide-angle images look decent, although it has inferior details and dynamic range than the primary sensor. But one thing that might bug you is that the normal, wide-angle, and telephoto images all have slight color shifts.

I also did a slight camera comparison between the Poco X2 and Realme 6 Pro too and found HDR function and portrait images to be better in the Realme 6 Pro while the Poco X2 has slightly better details.

For selfies, there are two cameras at the front, and no, the second one isn’t a depth sensor thankfully! It’s got a primary 16MP snapper and an 8MP ultra-wide-angle sensor. The primary lens does a very good job. HDR in selfies works well here. However, in portrait images, the HDR seems to be a little off when compared to the primary selfie images.

Wide-angle selfie images are not as good as the primary ones in terms of quality, but they serve the purpose nonetheless. This lens comes handy while taking group selfies.

Nighttime images are very ordinary and with the dedicated night mode turned on, exposure and details are improved by a little. There is also something called a tripod mode, which takes a very long exposure shot and the final output is very impressive. But for this feature to work best, you will have to use a tripod as the name implies, because even the slightest movement might result in blurry images.

In terms of videos, as the SD 720G limits the phone to 4k 30 fps, that is what you get here. They are stabilized in 1080p resolution in both 30 and 60 fps. The 4k option, however, is void of any kind of stabilization and comes out shaky if you are vlogging or in motion.

You cannot switch videos from normal to wide-angle in the same video, which I think Realme could add in its future update. Also, in 1080p @30 fps, you don’t have the option to natively zoom to 2x or 5x and it is limited to 1080p @60fps and the 4k @30fps option.

The battery life is another good thing about the phone. You get a 4,300 mAh battery that gives good endurance. It can last you a little more than a day when used in native 60Hz while 90Hz consumes the battery a bit more.

Even if the battery died in the middle of the day, it wouldn’t worry you because of the 30-Watt VOOC 4.0 charger you get inside the box that fills the battery from 0-100% within an hour! Talking of other things, the single speaker at the bottom is a decent but nothing extra-ordinary. You also have Dolby Atmos support which is a nice thing to have on a phone of this price.

In conclusion, the Realme 6 Pro is a stellar phone for the price, no doubts about that. But, with more and more phones cluttering the same price range, hardware has hardly become a good mode for differentiation! We have the Poco X2 (Read review) that comes for the exact price with almost similar features.

But what Realme is good at is its camera optimization and that reflects in their offerings. And the choice to go for a telephoto lens at the rear and a wide-angle- lens upfront is a very clever move and we hope other companies will adopt this as well!

Hence, because of having a slightly advanced camera setup and equally good performance, the 6 Pro looks like a better deal overall. So, if you are looking for a good mid-range phone in 2020, the Realme 6 Pro is one of the most competitive options currently out there!