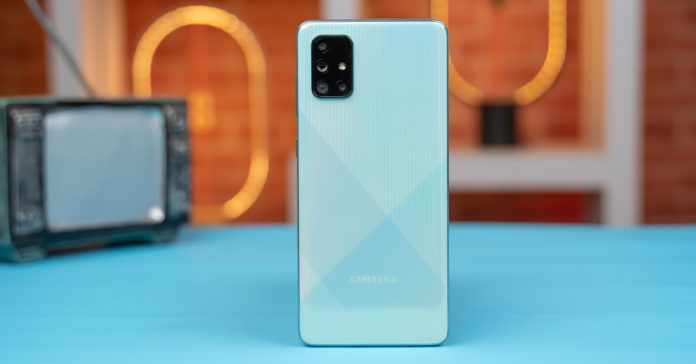 Design-wise, the most apparent change from its predecessor is the camera module and an addition of a macro lens. We also have this patterned gradient back that looks lovely.

But don’t be mistaken by the looks, because it seems like a glass back but in reality, the rear panel and frames are plastic. And during my time with the phone, the back surprisingly hasn’t developed any scratches, though I would strongly suggest you don’t take chances and case it up! 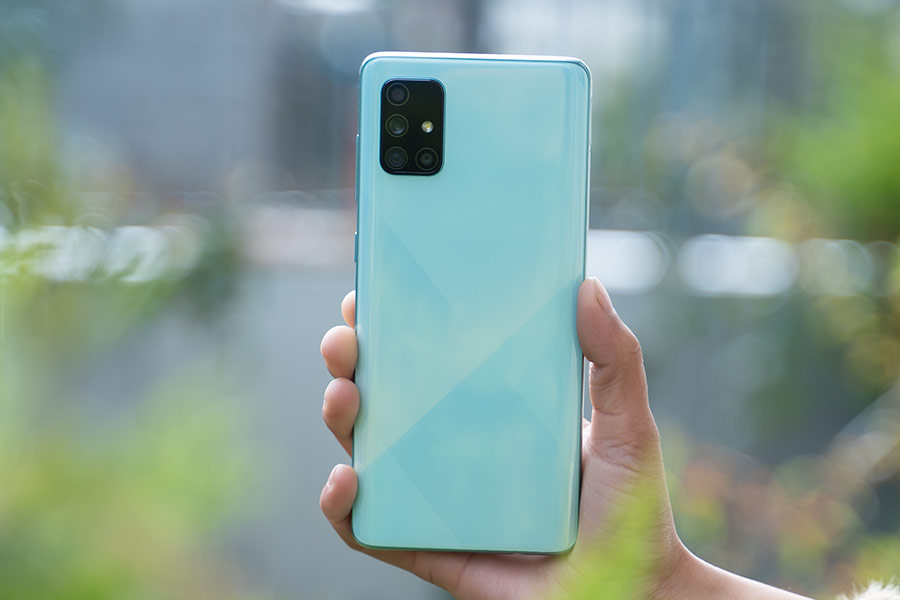 Another reason for using a case is for the camera bump that creates an imbalance when placing on a flat surface. But keeping those things aside, I absolutely adore this design choice from Samsung. I love how slim and ergonomic it is despite having a 4,500 mAh battery inside. Let’s talk performance, and one thing about Samsung’s mid-range phones we absolutely hate is their generosity in providing great chipset. And Although the Snapdragon 730 chipset that this phone has, is somewhat a decent choice but cmon its 2020, and you get cheaper phones these days with SD 730 or 730G.

So maybe Samsung could have gone with their in-house Exynos 9820 that was used on its last year’s Galaxy S10 flagship. Nevertheless, real-life usage is ‘good’ with the 6GB RAM it has. I have zero complaints in that matter, whether it be for normal tasks or rigorous multitasking.

For the hard-core gamers out there, yes, you are going to face a few stutters here and there while pushing the phone to its limits with high-end games. But let me assure you, it’s really only a few stutters and nothing more. Even after some continuous PUBG and COD sessions, I didn’t feel the device break down or heat up, so that’s impressive!

With Samsung’s mid-range phones, it’s usually the slow UI that made us overlook even the good things about those phones. But with the A71, I’ve had quite a good experience.Unlike what you would typically expect on a Samsung midrange phone, the UI on the A71 is very swift. Working around the phone is smooth and I never felt even an s- of stutter while using it.

Also, this might be a minor thing, but I am fond of the icons here too which are subtle and not that flashy. Having said that, the One UI 2.0 is not as polished as, say, the Galaxy S20 that I recently reviewed.  But for a mid-range device, the things you get in here is actually good.

Playing games has been pleasing in this big AMOLED display. Sadly, the A71 does not support a higher refresh rate. Therefore, I’m shying away from calling its display the best in its range. Well, we cannot rule out the fact that a 120Hz display is all the rage right now, can we? Even so, quality-wise, it’s hard not to admire this screen. The ever so tiny notch up top is non-intrusive and looks very nice actually. At a time when smartphone brands are either going for traditional notches or those god-awful dual punch holes, this one is a good-looking implementation in comparison!

The indoor brightness is more than enough and even outdoors in bright sunny days, you won’t be disappointed. The device is Widevine L1 certified but for unknown reasons, is not HDR10 compatible. And Samsung is still using the older Gorilla Glass 3 protection here. So, make sure you install a good screen protector. I, on the other hand, haven’t used any tempered glass on the unit I have and there are already few evident scratches. 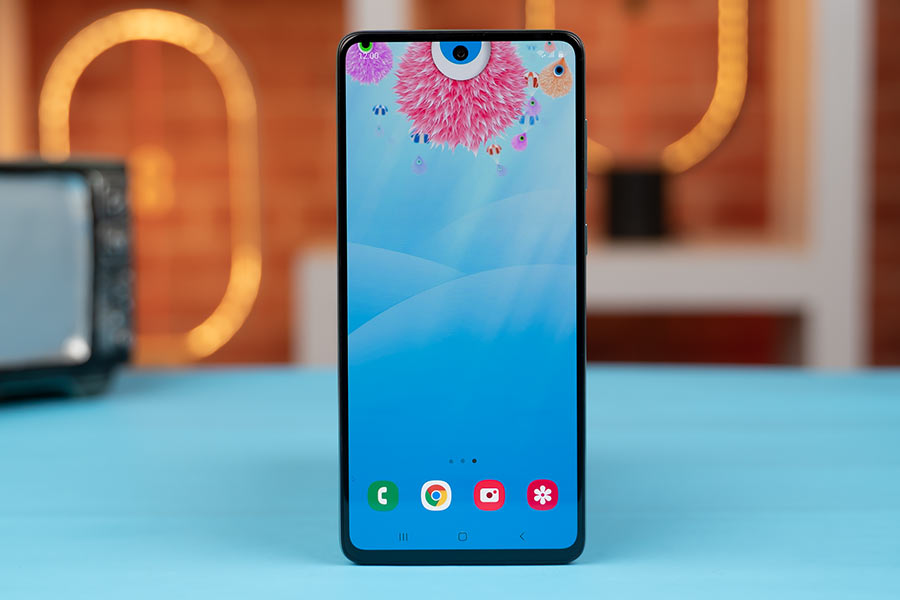 Likewise, because of the price restriction, the display doesn’t have those fancy curves. But the bezels are minimal and the display has an impressive 20:9 aspect ratio! So, display-wise, things look great here, although I hope the next iteration comes with a higher refresh rate display!

But since it’s the signature AMOLED panel from Samsung, you get perks like having an Always-On Display that you can customize to show whenever you want. There’s also an in-display fingerprint sensor which I’ll talk about later.

And about the battery, I have to say that it’s very enduring. For the heavy users out there, this phone is the way to go.

It gets you through a couple of hours of gaming, a lot of social media & YouTube and some photography with a little juice left at the end of the day. Plus, it’s a 60 Hz screen so there won’t be excessive drainage too. In very basic usage, it will get you through a day and a half of battery life, so that’s pretty cool.

Also, it fills in very fast as well. The 25-watt charger you get inside the box fills the battery in slightly over one hour and ten minutes. The faster charging is also the result of the Type-C to Type-C power delivery mechanism the phone employs. This might be something unique in a device of this price range, but if your laptop does not have a USB C port, data sharing might be some trouble for you. You will need an extra USB cable or a dongle.

Samsung’s mid-range devices never disappoint when it comes to camera performance and it really shows here.

The Galaxy A71 has a quad camera setup with a 64MP primary lens, followed by a 12MP ultra-wide-angle lens, a 5MP depth sensor, and an additional 5MP macro lens. And although the A71 here uses the same 64MP Samsung GW1 sensor like the Realme X2 and the Redmi Note 8 Pro, Samsung’s optimization is better if you nitpick aspects like details, color reproduction and sometimes HDR too!

The primary pixel binned 16MP images from the A71 are very rich in colors. Although some might think that they are a bit on the saturated side, I think it looks pleasing, to be honest. The details captured look fine and HDR works considerably well. The best images from the A71 are mostly reflected in natural elements like flowers and landscapes because Samsung’s optimization works best here.

The Ultra-Wide-angle sensor is also another impressive thing about the A71. Mostly, you get a standard 8MP sensor in midrange phones, but Samsung has gone a step further with a 12MP one, so you are getting more details. And not only that, the HDR works well too and the colors are as good as the primary lens.

The portrait shots also do not disappoint. The subject focus is on point and the background is definitely nice too. The edge detection isn’t as good as say the flagship one’s but overall, you will like them most of the times.

Speaking of disappointment, it has to be the macro lens here. Not only you cannot focus on the images while taking it, the  captured images produced, most of the times, are not very appealing in terms of quality. Maybe with the best possible lighting, you can get a few good enough shots & that’s about it.

Now talking about the 32MP selfie camera, it is very very good. Selfies usually have a good color tone and look good overall. Unlike Realme X2’s, this one has good HDR capabilities. So, even if I clicked selfies during sunny days, I got good looking pictures. Portrait selfies are not the best as its software at work but not anything to complain about either.

For the Tiktok users, this selfie camera even has a slow-mo video feature with which you can add a little flair to your videos. And even for others, you can definitely have some fun with this feature.

Talking of videos, quality-wise, they look good. You can crank the resolution up to 4K, but all the resolutions only support up to 30 fps, which, I think works for an average person, but for me, I think Samsung should have given a 60-fps option at least in FHD resolution. Also, talking of stabilization, 4k videos come out wobbly but 1080p videos have good stabilization.

While I have liked the images from the back camera, night time images are nothing out of the ordinary. So, most of the time I used the night mode which improves the exposure and details in images. It does crop the picture a little bit, which I don’t understand why. You can click wide-angle images from the night mode as well, which balances the exposure a little bit. But the normal night time wide-angle-images are not so impressive by themselves, as it is just a slight improvement and nothing else.

So, Overall, in terms of the camera, the only aspect where the Galaxy A71 left me wanting for more is the 60fps videos. Skip that and the rest are fine by my standards. I particularly liked the ultra-wide-angle shots, which I personally think more and more brands on their midrange lineup should focus on.

But something that I have always wanted Samsung to improve on is their slow in-display fingerprint sensors.  Although its slightly faster than last gen Galaxy A70, but its still slow when you speed-test against its Chinese counterparts. So, yes, I think Samsung needs to work on it a little bit. Another biometric option, the face unlock is fast and unlocks the phone before the fingerprint sensor does, all the time!

The single firing speaker is also good, not the flagship stereo speaker level, but I would rate it, like B+.  But one thing to note here is the sound gets blocked mostly when you play games and watch videos in landscape. So, I‘ve had to frequently adjust how I held the phone, which has been some trouble for me.

So, to sum it up, like I said in the beginning of this video, I’ve had a very good experience with the Galaxy A71. However, what makes for a good experience in my case, might not be the same for everyone else. For instance, phones like the Realme X2 Pro or the Oneplus 7 definitely have better performance when compared to the A71, so if your priority is gaming, you are better off with those options.

But, if you are looking for a smartphone, that does every bit for you, the A71 is one of the most viable choices available. And here in Nepal, since the Realme X2 Pro hasn’t launched yet, I think the Galaxy A71 is a very good choice for some 50,000 rupees.