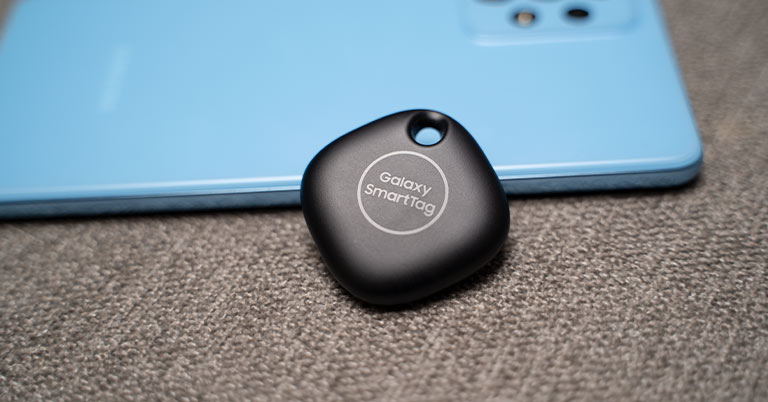 Samsung launched its very first smart tracker, the Galaxy SmartTag back in January alongside the Galaxy S21 series. And that is what we have with us today. I’ve been using this device for well over a month now and honestly, it is something that I didn’t know I needed. Allow me to discuss more about the Samsung Galaxy SmartTag in this review.

Honestly speaking, I have this habit of forgetting my scooter keys and even my backpacks in places like restaurants. And if you are like me, you’ll certainly consider the Galaxy SmartTag a boon. This Bluetooth low-energy powered tracker seamlessly connects with your Samsung smartphone and helps you keep track of the things to which it is attached.

Let’s dive into our review of the Samsung Galaxy SmartTag and find out whether this device is worth your money or not? 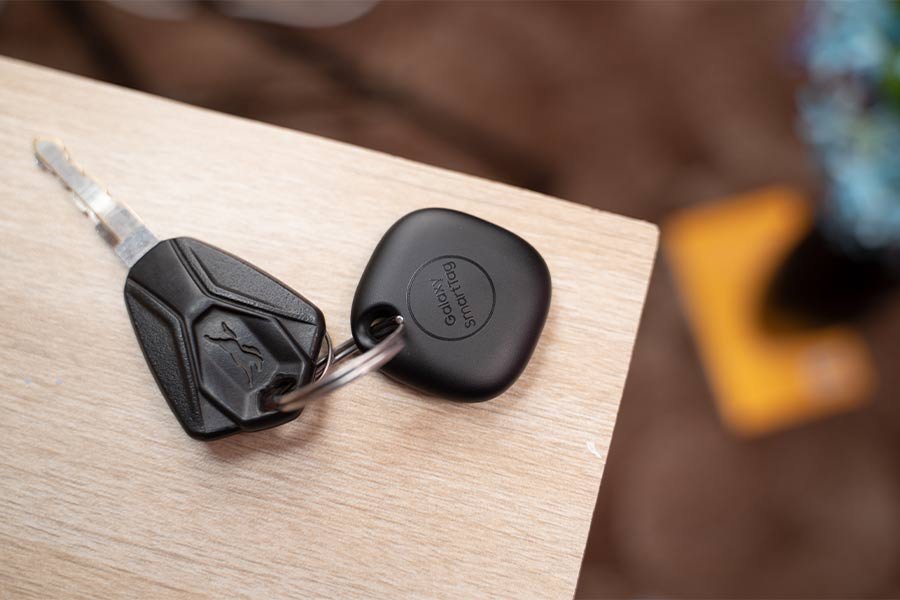 Shaped like a diamond with rounded corners, the device has a keyhole at the top. It has got a subtle design and does not look out of place at all. It’s compact enough that fits inside a closed fist. It weighs just 13 grams so it shouldn’t really hinder you in any way at all. However, you should probably refrain from keeping it in your wallet due to the slightly protruded design.

The material is soft to touch, however, it does attract fingerprint smudges. There is Samsung branding in the rear part and on the front, you get a button ingrained in the design itself with the Galaxy SmartTag branding.

I have used it as a keyring for the large part and it feels right at home. However, Samsung has advertised it as a device that helps keep track of pets, luggage, and smartphones. Finding a loop to attach this smart tag safely to your pet’s collar is a tough ask. A loop to go along with the smart tag would have been appreciated, so a slight disappointment in that part. So, my suggestion would be to get a good loop if you want to have this tracker attached to your pets.

Ease of/How to Use Galaxy SmartTag

Well, to use this device, you have to have a Samsung Galaxy smartphone running Android 8 or more. And this is quite frankly the biggest downside of this device. I know that there are a lot of Samsung users in the market, but the ones using other brands are not less either. The tracker is Samsung exclusive because other than just tracking your device, this can control various other smart things too. So, Samsung is trying to bind users within its ecosystem. But people can sway from one brand to another. Thus, maybe in future iterations, they will launch a tracker.

Anyway, getting back to the topic, if you have a Samsung smartphone or tablet, connecting the SmartTag is pretty straightforward. You’ll need to register the tag in the SmartThings app on your Galaxy device. Press the button on the tag once, and it shows up.

You can configure various settings of the tag from the app itself. For instance, what happens when you press the button once, when you hold the button, and more can be found in the app. Furthermore, if you want to be able to track your smartphone from the tag itself, then you’ll need to switch on that option too.

Well, the primary purpose of this tracker is to help you find out the things that you have misplaced or lost. For what it’s worth, it’s pretty competent at what Samsung’s promising. I was able to test the tracker at a distance of around 50-55 meters.

This is the way

Using the tracker is easy. Once you realize that something to which the tracker is attached has been lost, you can go to the smart things find inside the SmartThings app and choose from one of three options: search nearby, navigate, and ring. The search nearby option is similar to a game as it shows a semicircle that has a bar between hot and cold. As you get near the SmartTag, you’ll see the bar move towards hot. However, it is sort of a hit or miss thing. That’s because there was an instance where I was moving in the opposite direction, but the app was pointing towards hot.

The next is the navigate option. You can pinpoint the position of the tracker on the map too. It shows the last location of the tracker on the map where it was last connected to the smartphone. So no real-time tracking at all like a Bond movie. But the device can still connect to other Samsung smartphones which have the smart things app and update the location on your own map.

However, there’s a lot of assumption going on here as Samsung expects other Samsung users with the SmartThings app to pass by the tracker. And on top of that, they have to have their Bluetooth on.

Finally, there’s the ring option. And I found it to be the most useful as the SmartTag starts beeping once you use this option. The sound is pretty loud too. Samsung claims that the tag can get as loud as 89dB so it is pretty audible. Moreover, the tag is IP53 water resistance rated, meaning it can keep up with your outdoor lifestyle too. You can customize what tone the tracker should produce from the SmartThings app itself.

As mentioned earlier, the tag itself can be used to find the smartphone to which it is connected to. Just press the button twice and your phone will start beeping if it is within the Bluetooth range and even if it is in silent mode.

This smart tag has come in incredibly handy for me during this one month of usage. I was easily able to locate my lost keys and misplaced smartphone. However, using it with my pet dog was quite difficult as he tends to run around a lot and escaped the Bluetooth range most of the time.

Also, I don’t have plenty of IoT devices around my house. I was not able to use the tag to its full extent as I am not that into Samsung’s ecosystem. However, if you have one, then you can get something extra out of this tracker. As for its lifespan, the tracker uses a replaceable CR2032 battery. You can simply pop open the case from the slight opening on the bottom side. The existing one should easily last you for around 300 days, so you can get a good year’s use out of it. However, be sure to mark your calendar to replace the battery.

I believe that the SmartTag lives up to its name. It does what it is intended for pretty well. However, limiting the usage to just Samsung smartphones is the major downside here. But for those who consistently keep misplacing their stuff and are into the Samsung ecosystem, this tag is perfect.