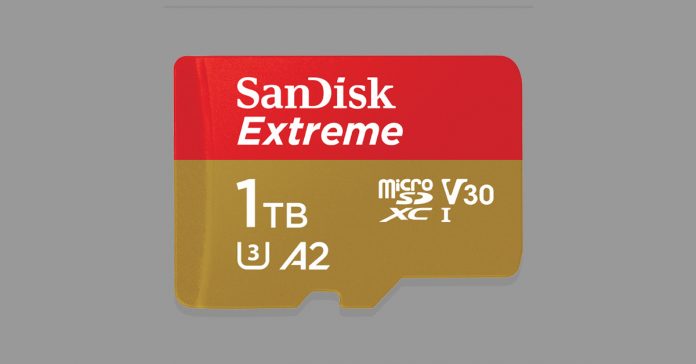 Yep, 1TB of storage on a microSD card, just think about it. That is a lot of storage, especially when you consider most would put it on a smartphone. And that is if your smartphone even supports 1TB of expandable storage. Plus, who even needs a terabyte of storage? What do you think? Would you buy it for the asking price $499?

Both companies unveiled their own versions of the card at the ongoing MWC event in Barcelona. Both have picked up their own bragging subjects too. Micron boasting about being the first to commercially be available while SanDisk claims it’s faster. But really, do you even care if the card you bought was the first in the world?

People trust SanDisk-brand cards to capture and preserve their world. Our goal is to deliver the best possible experience so consumers can share the content that’s important to them
-WD director of Marketing

The Micron’s SD card boasts a peak read speed of 100MB/s, white write speeds reach up to 95MB/s. As with the SanDisk bragging about its superior product, which can do up to 160MB/s read and 100MB/s write. I would definitely go for the SanDisk, which has more read and write speeds, but if your opinion differs from mine, well, good for you.

As for pricing, the $499 price tag is for the SanDisk’s product and its availability will start this April. Micron hasn’t yet revealed the pricing but says their product will go on sale sometime in Q2 this year with a “competitive” price tag. Yet, a similarly featured 512GB microSD costs around $200 but the premium is sure to go down with time.