Every other social media application has been copying Snapchat, be it with their ‘story’ mode or their ‘timer’ in pictures. Facebook has come under a lot of criticism lately for cloning Snapchat’s features on Instagram, Whatsapp, and Messenger.

And now, another messaging application, Viber has followed this trend too albeit in a different manner. The messaging giants have thrown in some of the old Snapchat features which had made the application popular among the public.

Viber users will now get to set a timer on their entire messages and pictures by creating a new ‘secret chat’ with someone. While we had already got to see the timer feature, secret chat is a new of its kind. Even though other social media applications let you add self-destructing timer for texts, Viber is the first to let users automatically delete an entire text. 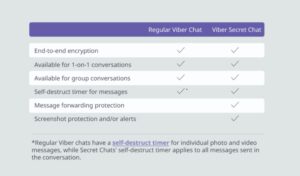 Similar to Snapchat, Viber also alerts users when another person takes a screenshot of their conversation. The ‘secret chat’ feature adds up to Viber’s ‘end-to-end encryption’ feature and the ‘hide messages’ feature.

Users can simply add a person to talk to in a secret chat. Along the ‘send’ button sits a timer when lets users set a time limit for the message to self-destruct. The new feature is easy to use and configure.

“Make your conversations more meaningful by choosing what stays and what goes. Secret messages give you the ability to decide when the photos and videos you send will disappear from your conversation and, in doing so, let you decide what should and shouldn’t be a permanent part of your conversation history”, the application shared on their blog.

“Some things are meant to be seen once and then never again. When you send a secret message, it can be viewed exactly one time and, maybe more importantly, it can’t be shown to anyone else afterward.”

The above mentioned features can be found on Viber’s newest update.