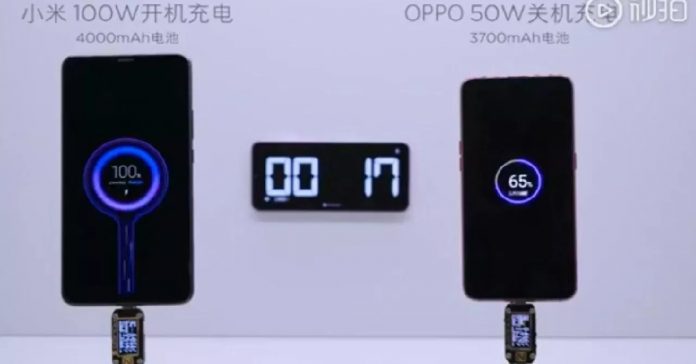 Innovations in the smartphone arena seem to be somewhat stagnant, looking at the recent years. Other than cameras, smartphone manufacturers barely seem to focus on other aspects. When it comes to charging technology, big players like Samsung and Apple are reiterating the same tech for a considerable amount of time. Up until now, Oppo and Huawei with their 50-watt and 55-watt charging technology, were the leaders in fast charging tech. However, Xiaomi surpassed both of them by introducing a new charging standard; which can inject power to the battery at double the rate than the former bests. Yes, you heard it right! Dubbed as Super Charge Turbo Standard, this new charging technology can push 100-watt power in a smartphone’s battery. Looks like they went all out in naming the tech, itself!

Demonstrating this awesome technology, Xiaomi co-founder Bin Lin posted a video in Weibo. In the video, Lin compared the charging test of an unnamed Xiaomi handset with 4000 mAh to the Oppo R17 Pro, with 3700 mAh battery. The Oppo R17 Pro comes with a bi-cell battery design. It means that two 1850 mAh batteries are stacked together in series making a total capacity of 3700 mAh. And this device charges at 50-watt charging speed. While comparing the R17 Pro against the Xiaomi’s unnamed smartphone, the R17 Pro only reached 65% mark when Xiaomi device filled to 100%. And Xiaomi handset took only 17 minutes to get to that level!

This is surely amazing. Since most of the smartphones come with slow charging speed, it takes a lot of time to get the devices fully charged. And that problem is realized even more when you are in a hurry. With this new Super Charge Turbo technology, a 4000 mAh battery can charge up to 50% just in 7 minutes! And that could be enough for a day for most of the users on normal use. So I am really eager to see the tech implemented on the commercial phones.

However, we don’t have any sort of a time-line as to when this tech will be available commercially. However, Redmi President, Lu Weibing revealed that Redmi would be the first one to mass-produce Xiaomi 100-watt fast charger.

As fascinating as the technology sounds, safety is equally important while supplying a high amount of power in small and compact devices like a smartphone. In the case of Oppo, TÜV Rheinland has certified the handset marking it as a safe device to use. TÜV Rheinland is a German safety authority, which specializes in testing, inspection, and certification to ensure the safety of products. We haven’t yet heard about Xiaomi receiving such certifications. However, Xiaomi might consider that before getting it ready for mass production. Otherwise, the Redmi phone with a 100-watt fast charging could end up being another Samsung Galaxy Note 7!