Gaming laptops are great until they heat up and start to throttle. This is still one of the main reasons why people get desktop for high-performance gaming. But what about those who admire portability, are there no hopes left? Well, that’s when the Acer Predator 15 G9 caught our attention, in all of its glory.

Yes, it’s thick and bulky and even makes gaming laptops like Dell Inspiron and MSI’s Apache offering looks light and portable. But, the Predator 15 is capable of artefact the MSIs and Dells of the world just can’t, and that’s proper cooling. So, let’s check this beast and find out if the Predator justifies the Rs.178,000 price tag it carries.

Let’s start off with the elephant in the room because this is the elephant of all laptops. It’s hands down the biggest laptop I’ve ever tested, and it’s only 15” and yet, it has a weight of 3.4Kgs. And that’s a lot when you carrying it around with you all day. But that is one and the only quirk about this laptop, because it’s all good stuff from here on out. 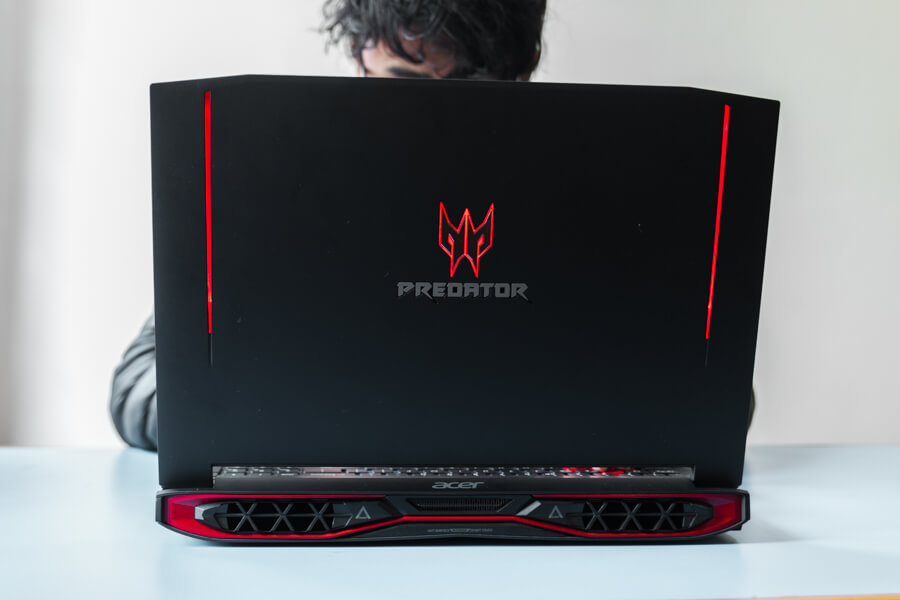 The laptop itself is very sturdy and well built. There is a very aggressive vibe to it with the sharp edges and RGB lighting on most parts. It’s a plastic body with rubberized finish and feels pretty durable for the most part. But on the downside, it easily retains dust particles and oil stains. 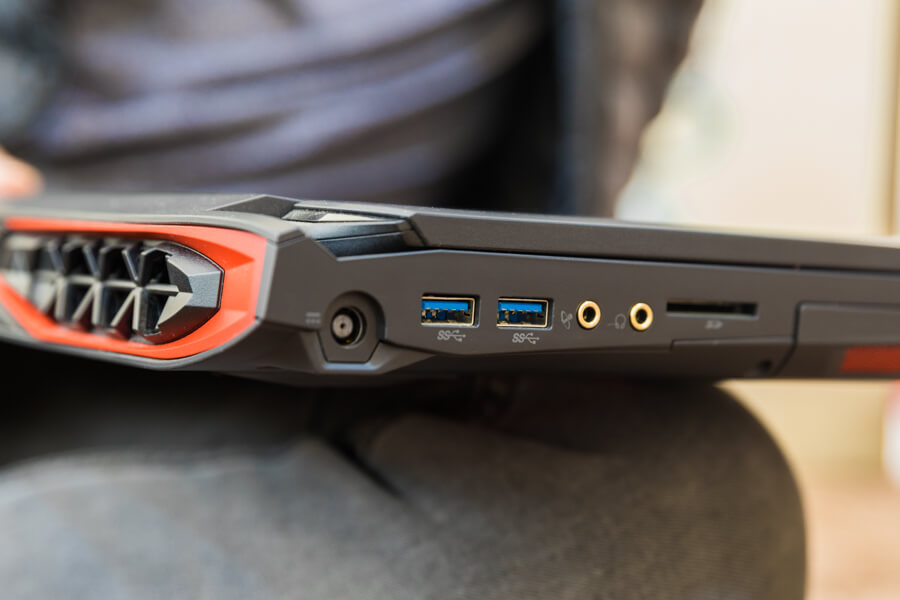 The display on this laptop is ok for the most part. It’s a 15” display with a resolution of 1920*1080 at 60Hz. It covers about 84% of the SRGB and 55% of the Adobe RGB color spectrum. That is on par with the MSI GE62 we previously tested, so not the best display for all the color-intensive workers out there. 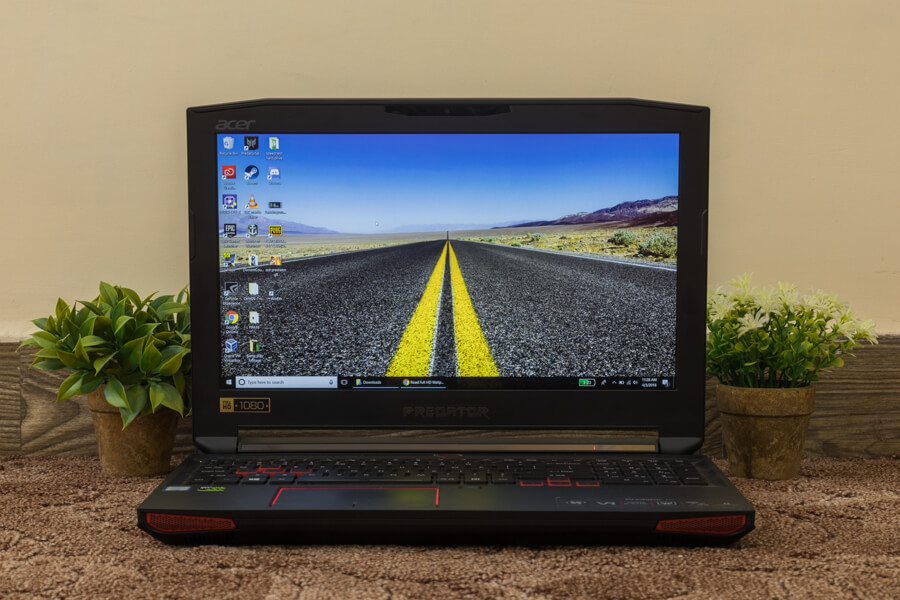 The brightness also caps out at around 270nits, which isn’t bad, but not any better than other gaming laptops that we have tested.

The performance follows the same story as every other gaming laptop we have tested till now. The i7-7700HQ performs the same as others out there. It is a 45 watt Quad Core CPU with speeds of up to 3.8GHz. The RAM department is handled by a 2400MHz single channel 16GB, so no complains there as well. 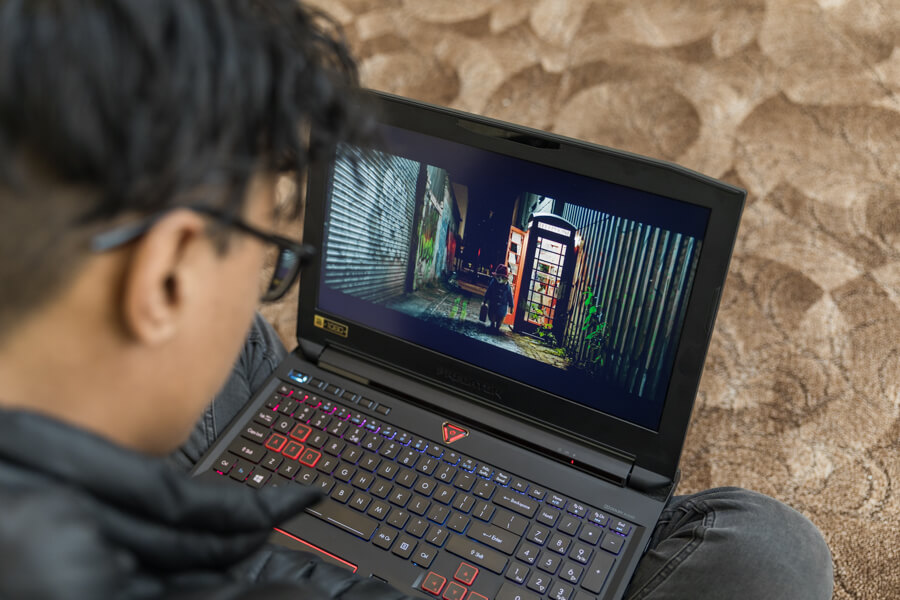 Also, if you ever want to, there is an extra RAM slot free and ready for a new RAM. The laptop was very snappy, responsive and adequately powerful with no slowdowns whatsoever. There were also no bottlenecks and multitasking was a breeze. In general, the laptop performs well, and if you ever need it, RAM upgrade is just a screw away.

The graphics power was as powerful as any other laptop GTX 1060 out there. This laptop comes with 6GB of DDR5 graphics memory, and it is pretty powerful, to begin with. How powerful you ask? Well, optimized triple-A titles run pretty well, with above 60 frames per second.

And that is good and all, but let’s look at the numbers, and we mean real numbers. We did test a lot of games, but here are 5 games which we ran on maximum or high settings with steady frame rates.

Coming to the best part about the laptop, which is the thermals. The laptop has two fans, which work pretty well on their own. But they are aided by this other fan which is removable, and Acer calls it the PREDATOR FROSTCORE. It’s designed and made by CoolerMaster which helps with keeping the CPU and GPU temperatures at the minimum.

For the real-life thermal performance, I played PUBG for 4 Hours continuous and the laptop didn’t even break a sweat, it barely got warm to the touch. I played at 1080p high settings the whole time and the frame rates didn’t drop below 60 once. Just for comparison, the 7577 started to seriously throttle after just 3 hours and by the time I was at my 4th continuous hour, the game was almost unplayable.

I basically never managed to throttle the laptop, no matter how hard I tried. Even with tiresome benchmarks, heavy gaming marathons and videos renders, I failed to heat up the laptop. It did get really loud, but if a loud laptop is what you pay for a cool laptop, it’s not really a bad deal. A pair of headphones will do the trick as well.

The back of the laptop is equipped with these huge exhaust vents that throw out some of the hottest air from a laptop. This does, in turn, keeps your laptop cool but will very well irritate anyone sitting in front of your laptop. There is also an option to run the fans at maximum speeds for even better cooling at all time.

This laptop can fit a total of 3 storage devices, two SSDs and a full-size 2.5″ laptop hard disk. The SSD on this laptop is on the slower side, but it gets the job done. With read and write speeds of 500mbps and 300mbps, it will definitely be better than a traditional hard drive but nothing special. Basic tasks are snappy, although game loading time does take a hit. A 1TB hard disk is present for storage, and there is always the option to add another SSD to the empty slot.

It has chicklet keys which is one of the best I’ve seen on a laptop. They have a very satisfying key travel alongside four zonal backlit that can be controlled by a software. You also get 5 macro keys, each can be individually configured. Then there is another key to change the preset of the macro keys giving you, technically a total of 15 configurable keys. It also has a big power button, giving it a real gaming vibe. 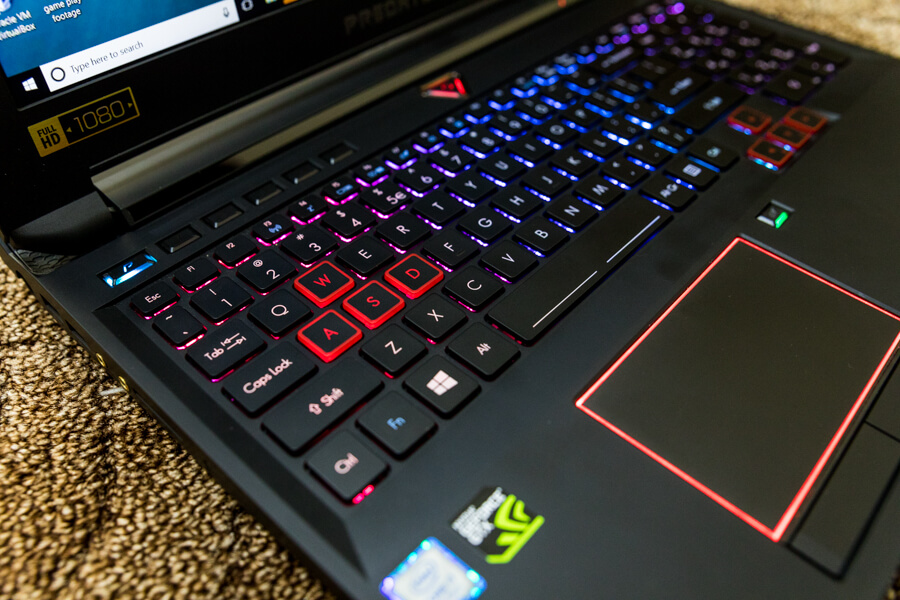 The trackpad is also fine on the most part. It has separate right and left buttons, alongside a dedicated trackpad on/off button, really handy when playing games or just writing a novel. The trackpad is made up of plastic but none the less, it’s pretty accurate and doesn’t feel cheap at all.

We have established that this laptop is huge. And with it comes in a huge area to fit a huge battery. Asus did exactly the same, a 90,000-MWh battery is something you don’t usually see on a laptop, it’s barely under the legal flight limits. Thanks to the same battery, you get about 5 hours of normal usage, which is actually a lot considering it’s a gaming laptop. If you plan to game on battery, about 2 hours is what you should expect at most. Just keep in mind you don’t have access to the Turbo mode on battery.

The Killer WIFI goes very well with the Killer Ethernet, resulting in you killing all of the lags out of your online gaming sessions. Port selection includes an Ethernet port, Display port, HDMI, 2 USB 3.0 and a Thunderbolt 3.0 port on the right. On the left, you get another two USB 3.0 port, SD Card reader, 2 audio jacks and the power port.

Other than that, the laptop comes with a wide selection of pre-built software, which will help you get the best out of the hardware. Predator Sense is one of the most useful apps in there. It lets you switch between Normal, Faster and Turbo mode (only available in AC mode).

The laptop comes with a G Sync sticker below the keyboard, which got me really excited. Sadly, the inbuilt display doesn’t actually support G Sync, so you need an external G Sync capable monitor for it. I was disappointed at first, and a G Sync display would have made this laptop an actual value for money, it wasn’t by any means a deal breaker.

So, for the price of Rs 1,80,000, Acer has put a lot on the table for this laptop. The sturdy build and edgy design is something that really grabs your attention, not to mention such a solid hardware configuration that guarantees utmost gaming performance along with one of the best cooling system out there. Certainly sounds like a solid deal right? Well, if you plan on using it for the sole purpose of gaming, and don’t mind the bad portability, then a definite yes. There are a few other laptops like the Alienware 15 with a 120Hz display or the extremely portable Razer Blade 14, so it definitely depends on what you want.