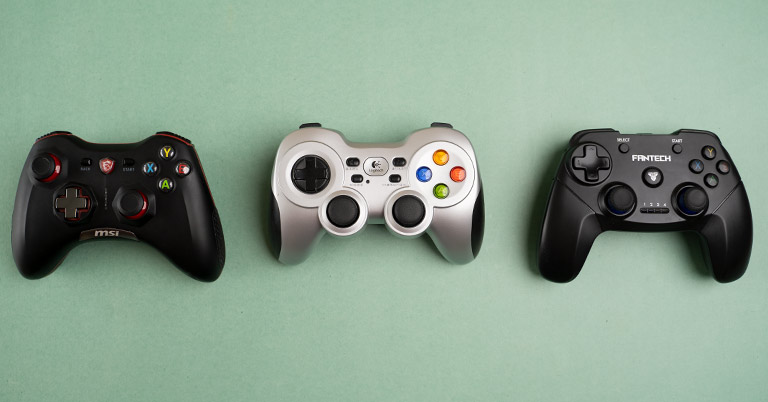 Here, we will compare three of the best wireless game controllers that you can buy in Nepal right now. In this list, we have Fantech WGP12 Revolver, MSI Force GC30, and Logitech Wireless Gamepad F710 fighting for the bragging right.

A wireless controller has multiple advantages over its wired counterpart, that is, keeping aside the input latency. Even so, modern wireless controllers have gotten so good that you won’t notice the latency unless you are into competitive e-sports.

Cordless controllers don’t restrict your movement and make your setup look clean too. In addition, you won’t have to worry about the wire getting damaged either. However, you will have to make sure the charge does not run out during your gaming sessions.

It is quite apparent that the Logitech Wireless Gamepad F710 is the heaviest of the bunch. It is also the most premium-looking. The F710 has a glossy silver finish on the front, while the rear has a matte finish. There are rubber grips on the side. Users can attach the dongle to the battery compartment on the back, avoiding misplacements.

MSI GC30 takes its inspiration from the Xbox controller. The Red and Black color scheme come from the MSI Dragon logo. It weighs around 240 grams. MSI has also included rubber padding on the side.

Weighing around 182 grams, the Fantech WGP12 is the lightest here. Nothing in the design stands out. It also lacks padding on the side. Fantech WGP12 looks cheap, but it is not discomforting while playing games.

All three controllers arrive with a 2.4GHz dongle. Thus, you have all the freedom to move as conveniently as you’d want. They are plug-and-play devices of course and thus, you won’t have to go through the hassle of installing additional drivers.

You can even use the MSI Force GC30 with a MicroUSB cable without using the dongle. I had no problem using any of the three with my PC, but when I tried them on my old PlayStation 3, the Fantech WGP12 kept disconnecting time and again.

Moving on, MSI GC30 has a button layout like that of an Xbox controller. Thus, users with PlayStation controllers may find it strange to use initially.

Buttons on the MSI GC30 and Fantech WGP12 are smaller compared to those on the Logitech. These buttons are on the mushy side, too. Compared to them, buttons on Logitech F710 are softer.

I’m impressed by the D-Pad on the MSI GC30. Not only does it work better, but you also get an extra D-Pad cover in the box.

Logitech F710 has the worst D-Pad of the three. Users have to press the button hard to register a press. The Fantech WGP12 is not error-free, but it is the middle ground between the two.

The analog stick on the Logitech F710 offers a better grip among the three. It also feels more premium. Thus, your thumb won’t hurt even after a prolonged gaming session. Fantech WGP12 also has a decent grip and feel.

It is disappointing that MSI did not try to differentiate the stick from the rest of the body. They’ve used the same material. Thus, it doesn’t offer much grip like the other two. Other than that, I didn’t encounter any problem with any of the controllers.

Logitech probably has the hardest shoulder button on the three, and I like it. Button-press has a pleasing click sound to them. Trigger buttons on the MSI GC30 have good grips. They also have the largest travel. The shoulder buttons on Fantech’s controller are soft and work well too. I have no complaints here.

Logitech F710 features a dedicated button to turn on/off the vibration. Vibration on the other two is automatic. The feedback by the three controllers is almost indistinguishable.

Logitech F710 has additional switches for X-input and Direct input. Using the Direct input on my PlayStation, I noticed that the vibration and home button were not functional.

On the other hand, you have to switch between the two using the Home key on the other two. Fantech WGP12 and MSI GC30 are compatible with PC, consoles, and Android. Except for the disconnection issue with the WGP12, both worked pretty well on my PlayStation 3. MSI even offers a 0.3m micro USB OTG cable to play games on the phone.

Logitech F710 runs on two AA batteries, which are readily available in the market. You can swap them on your own. The other two features have built-in batteries of 600mAh each. They last anywhere between 7 to 9 hours on a single charge. Similarly, it takes around 3 to 4 hours to charge them.

Accessories in the box

Of the three, the Fantech WGP12 offers the best value-for-money. It has a decent build quality, connectivity, and buttons. Logitech F710 could be a good option if you play tons of games and want a sturdy controller that will last you for years. Lastly, I would recommend the MSI GC30 to people who are familiar with the Xbox controller.