MSI is a name that is mostly associated with gaming laptops and other components. However, the company also lineups for business and productivity, on top of which lies the Summit Series. Here, we will wind the latest MSI Summit laptops with the key specs, official price, and availability in Nepal.

As mentioned earlier, the Summit series is the flagship business lineup from MSI. The series was introduced in late 2020 and it quickly made its way to Nepali. The MSI Summit series is further categorized into the E and B with the former having a higher price tag in Nepal. In addition, MSI even offers a Flip version of some of its Summit laptops.

MSI Summit B also comes in two display sizes: 14″ and 15.6″. However, it doesn’t have options for UHD resolution and touch panel. It’s powered by the latest 11th Gen Intel processors but there is no option for discrete graphics. Similarly, the battery is of 52Whr and there is a 65W adapter included in the box.

The E series is the more premium of the two and is targeted at creative professionals. Here, you get to choose between two main form factors: 15.6″ and 14″. There are even 13 and 16-inch Flips modes but they are a little hard to find.

You can choose between a touch and a non-touch display. Similarly, you can also get up to 100% of the Adobe RGB gamut. The chassis is made from aluminum, and it has military-grade durability.

As for performance, you get the latest 11th Gen Intel Core processors. Similarly, you can also configure it with NVIDIA GeForce GTX 1650 Ti GPU.

The battery size depends on the form factor that you decide to go with, but you get a 90W power adapter with either of them. Other notable features include Wi-Fi 6 support, Hi-Res Audio, and Windows Hello-backed fingerprint scanner, and an IR webcam. 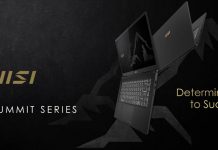 Sanjeev - September 14, 2022
MSI introduced the Summit series of business laptops to take over the market of premium business & productivity laptops. The good news here is... 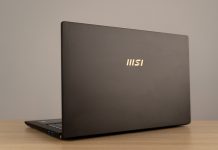 MSI Summit E15 Review: A Little Short Of The Summit

Laptops come in different shapes and sizes—catering to the requirements of different types of users. MSI, which is well known for its wide array...
© Gadgetbyte Nepal Pvt. Ltd. 2013-2022