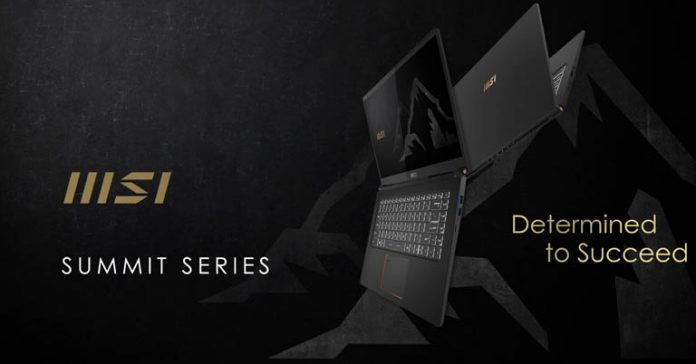 MSI introduced the Summit series of business laptops to take over the market of premium business & productivity laptops. The good news here is that the new Summit laptops from MSI are now available in Nepal. In this post, we will be taking a look at the specs, features, price, and availability of MSI Summit laptops in Nepal.

Like mentioned earlier, the Summit lineup from MSI is catered towards business professionals. As of now, there are two series under the lineup – Summit E and Summit B series. The former offers more advanced specs than the latter and thus can be utilized by content creators as well.

There are two laptops under the Summit E series – E15 and E14. The E15 comes with a 15.6-inch FHD display whereas the E14 comes with a 14-inch panel. As of now, only the E15 is available in Nepal. There is no option for a touch display either.  However, users can choose between FHD and 4K UHD panels. The latter even covers 100% of Adobe RGB color gamut too. The chassis is made up of aluminum and it is available in Ink Black color.

The laptop is powered by the latest 11th-gen Intel Core processors. The top-end variant is powered by Core i7–1185G7. It boasts a dual-core turbo speed of up to 4.8GHz. Intel claims that it is 1.5 times faster than the i7–1065G7. The new 11th-gen Intel Processor comes with Iris Xe graphics which boasts 4.5 times better speed than last-gen UHD graphics. If it is not enough, it is available with up to NVIDIA GeForce GTX 1650 Ti Max-Q. It’s a toned version of the regular GTX 1650 Ti with the compromises done to fit it on a slimmer chassis. The E15 sports a bigger battery of 82Whr compared to E14’s 52 WHr battery. MSI claims battery endurance of up to 16 hours and 10 hours on the E15 and E14 respectively. The two laptops feature TPM 2.0 for hardware-based security. There is Windows Hello support for both fingerprint scanners and Face Unlock.

In terms of connectivity, MSI has included two Thunderbolt 4 ports, a micro SD card, and an HDMI port, and a mic/headphone combo jack on both laptops. However, the E15 has two USB 3.2 Gen 2 Type-A ports while E14 only has one USB 2.0 Type-A port. Other notable features include Hi-Res Audio and MSI Sound Tune-powered noise cancellation.


The MSI Summit B series consists of two laptops – B14 and B15. The B14 features a bigger display of 15.6-inch while the B14 sports a 14-inch screen. Both are IPS panels. There is no option for touch panel and UHD resolution like in the E series. These laptops are also powered by an 11th-gen Intel Core processor. Users will have to be content with the Intel Irix Xe graphics as they do not have discrete GPUs. They include a 52Whr battery like the E14 but with support for a 65W power adapter. MSI Summit B15, B14 Specifications:


The starting price of the MSI Summit series laptops in Nepal is NPR 138,000 and NPR 249,000 respectively for the B15 A11M and E15 A11SCS models. Their specs and pricing details are tabulated below. In Nepal, you can buy MSI Summit B and E series of business laptops at ITTI.