Dell has been updating their Inspiron 7000 gaming series 3 years in a row now. And this year is no different, thanks to Nvidia’s Max Q design, Dell has managed to fit a GTX 1060 alongside a 7th gen Intel quad-core processor, a really fast SSD and a Thunderbolt 3 port on its latest Dell 7577 gaming laptop.

If you are in the gaming laptop market with a budget of around Rs.150,000, this laptop offers amazing specs which seem to be Dell’s ongoing trend as well. Since we are talking about a gaming laptop, let’s start off with its GPU.

This laptop basically crushes it in the 1080p segment. The GTX 1060 MAX-Q clocked at 1063Mhz with 1280 CUDA cores takes care of the high-end gaming needs along with 6GB of GDDR5 RAM. Putting these numbers into context, it can do 60fps in any game you throw at it either in Ultra or high settings and in some pretty rare cases, medium too. The Max Q design does affect your performance. For instance, the desktop 1060 will give you 118fps in final fantasy XV on low settings. Under the same configurations, the GTX 1060 laptop variant will deliver around 110fps. Now compare them with the GTX 1060 MAX Q design and you will get around 73 fps. It’s still a healthy upgrade over the 1050Ti, but not as good as the regular 1060s out there.

If you are worried how much the MaxQ design affects your performance, we have a graph below to illustrate just that with FPS counts of Final Fantasy on low setting on each GPU system.

With more power comes more heat and the GTX 1060 on this relatively compact laptop does just that. The laptop heats up a lot more, a lot faster. After 3 hours of continuous PUBG, the laptop throttle a lot with fps dropping below the 40fps playable mark even at the lowest settings. The same thing repeated with all the other games I tested as well.

The laptop features a sturdy build with sharp edges and is reasonably heavy. Put them into numbers, you get a 2.7kg laptop with a thickness less than an inch. The MAX Q design also helped with the thickness a lot. The design itself is identical to the Dell 7567. As a gaming laptop, portability won’t be an issue if you manage to get a bag big enough. The laptop will not fit on your average 15″ laptop bag or a protective case for that matter. Basically, the laptop features a 15.6″ inch display with the footprints of an average 17″ laptop.

The laptop runs on a 45-watt Quad Core i7 7700HQ processor that can reach speeds of up to 3.8GHz. The RAM is handled by a 2400mHz single channel 16GB stick. At the time of its release, this is the best configuration one could hope to find in its respective price range. 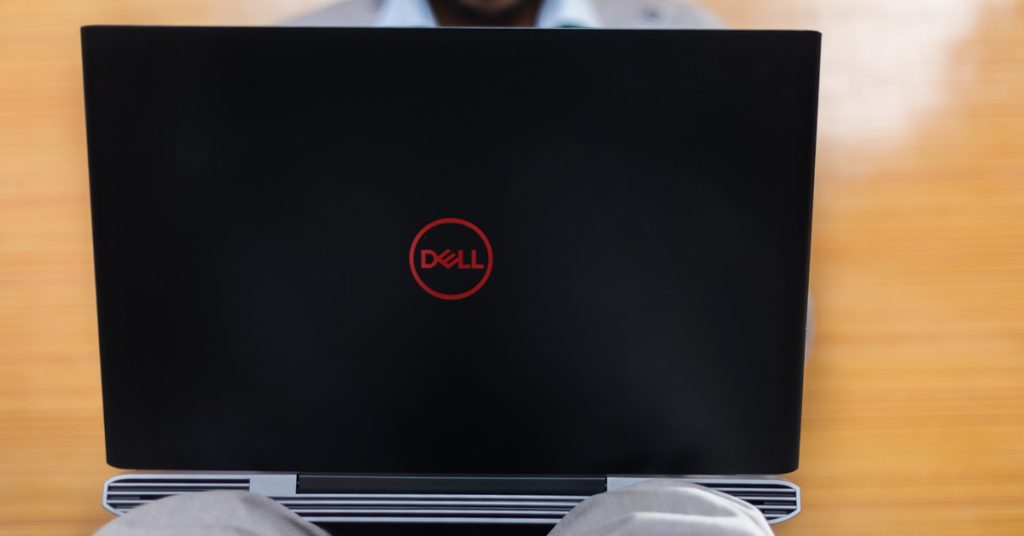 The laptop was snappy, responsive and seems to do everything you throw at it. Basic multitasking was a breeze, I did try multitasking while gaming as well, and got mixed results. All in all, the laptop was one of the best performers out there.

The IPS panel is identical to it predecessor, with 71% of sRGB and 53% of Adobe RGB color coverage. It’s a pretty good IPS panel if you ask me, just not the one for those who do color intensive work (Photoshop, Lightroom, After effects). Other than that the display has a wide viewing angle and non-reflective matte finish. The max brightness of just 250 nits might seem low but you just cannot complain. It is a 1080p 60Hz panel, which goes very well with the laptop’s specifications. There’s a 4K version of this laptop with better color accuracy but unfortunately, it’s not available in Nepal. So, overall the display is decent for gamers, but if you are a content creator, it’s not the laptop for you.

Storage is where the laptop shines. The Dell 7577 laptop features a really good SSD with read and write speeds of 2812Mbps and 1293Mbps respectively. Just for comparison, it’s predecessor Dell 7567 featured an SSD with speeds of 500Mbps down and 300Mbps up.

Numbers aside, the SSD will fail to show any difference in basic tasks. However, games load a lot faster and file transfers are a breeze. The SSD this laptop features is one of the fastest we have seen in its price range. It also has a 1TB 5400RPM hard disk for cheaper storage.

The keyboard is good but will need some getting used to. The laptop features a very minimalistic keyboard with no extra programmable keys, to begin with. First timers might even have trouble using it, thanks to its low key travel and a cheap feeling when you press hard. The good thing here is it offers literally no flex resulting in a durable and long-lasting feeling. 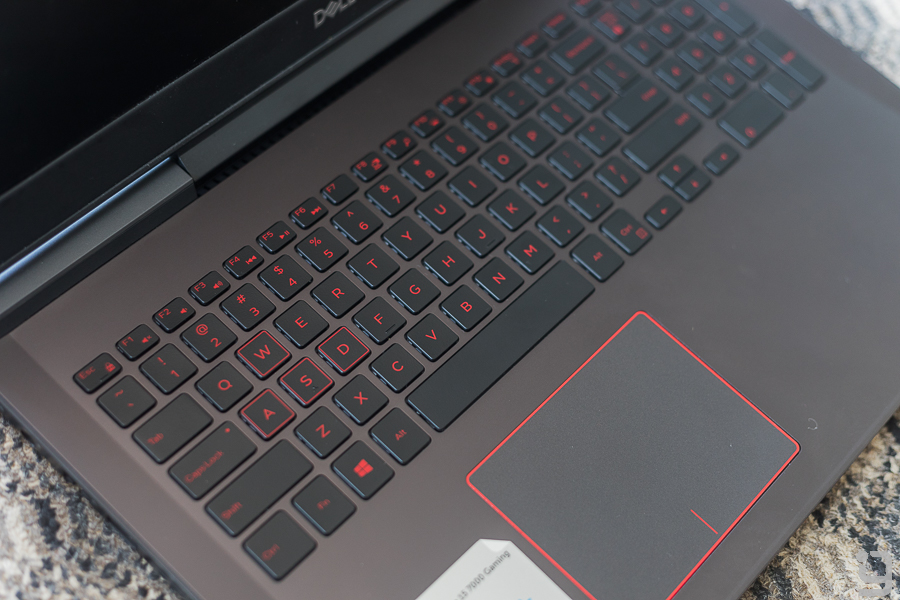 The trackpad is ok, but it’s made out of cheap plastic, although I must say it offers good tracking and gestures that work perfectly. Dell did opt for windows precision drivers, which is how I feel every laptop should come with, in the first place.

The 75Whr battery on the 7567 has shrunken down to a 56Whr capacity, which will be one of the biggest disappointments of all. I got an average of around 3 hours of battery life versus the 5 and a half hours on its predecessor. It is a gaming laptop, so most people might not care much about the battery. But given that its sibling puts out almost 6 hours of battery life on a single charge, the 3 hours just seems disappointing. Also, if you want to game on battery, expect about an hour or less. 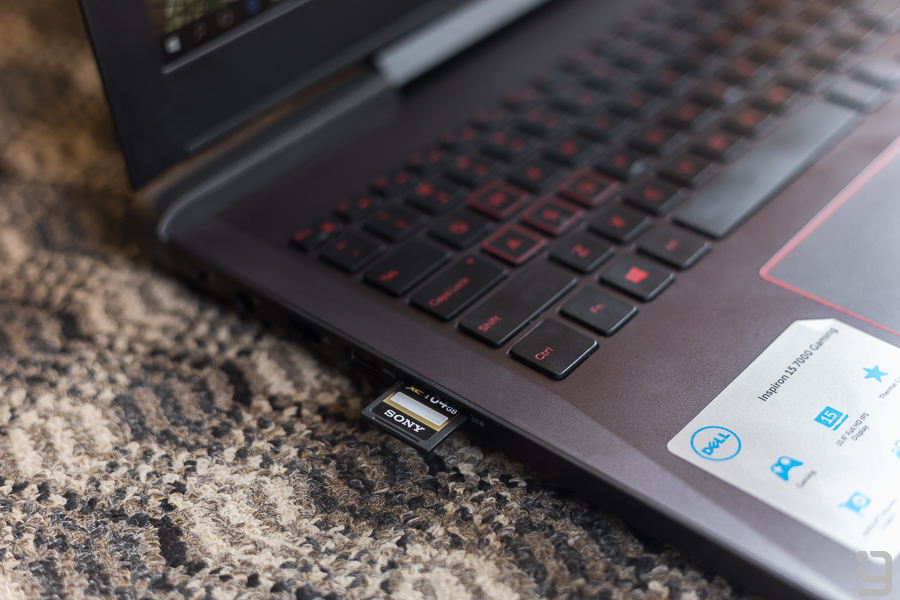 Ports selection remains one of the most satisfactory aspec of the Dell 7577. It consists of almost every port you could think of. On the left are a memory card slot, a USB 3.0 port, Ethernet, and a charger port. On the right is an audio port, a pair of USB 3.0, an HDMI port and finally a USB 3.1 Type C port with Thunderbolt 3 support with 4 lanes of PCI-E meaning you can connect external GPU to get maximum bandwidth. Not like you really need it but it’s there for some extra boost. There is also the usual Intel dual-band Wi-Fi ac and Bluetooth 4.2 for connectivity which works well, as expected.

So, for the price, you get a quad-core i7 processor, 16GB of DDR 4 RAM, a very fast SSD, a good IPS display, and a very capable GTX 1060 with MAX Q design. The question is, is it the best laptop for gaming under 150k? Probably Yes.

Its competitors include Lenovo Y720, the MSI GE 62VR 7RF, and the Helios 300 with all of them sharing almost identical specs on paper. But the Lenovo Y720 and MSI Ge62VR are a bit on the expensive side and the Helios 300 compromises on a few features but manages to stay the cheapest of the bunch. However, if you are on a tight budget, you can opt for the Dell 7567 and not miss out on much.