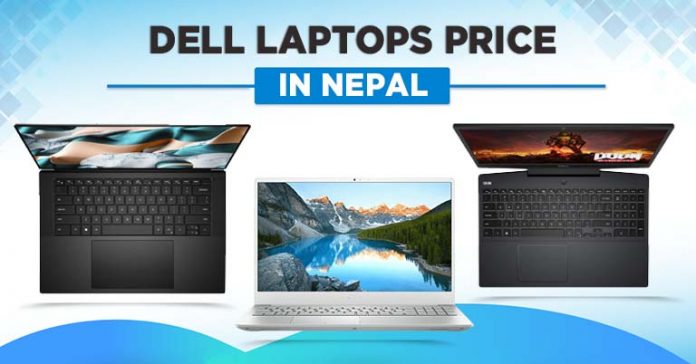 Dell has a huge selection of laptops currently on sale in Nepal, meeting the needs of every laptop buyer in every price segment. Their offerings include Inspiron, XPS, Alienware, and a few other series. Although the more appealing Alienware isn’t officially available in Nepal, you can easily find them in the grey markets (unauthorized seller), but buying from unauthorized sellers might be a risky move because of unofficial warranty and after-sales services. However, Dell laptops from the unauthorized sellers do come with a cheaper price tag than the official channels and they’re not that unreliable either, having been in business for so long. So the choice is yours.

The authorized seller of Dell laptops in Nepal is Neoteric Nepal, a subsidiary company of the Golchha Organisation and Generation Next Communications. Currently, laptops from the Inspiron, Latitude, G, XPS series are available at Neoteric. You can either purchase online via its online portal – Neostore or showrooms located in major locations of Kathmandu valley such as Jawalakhel, Maitighar, and Newroad. In terms of unofficial stores, you can buy Dell laptops from ITTI, LDS, Zozo Hub, or BigByte in Nepal.

For this list, we’ll not be including older 8th, 9th-gen CPU-powered Dell laptops since they’re pretty dated, and the newer 10th, 11th-gen processor will fare you better instead.

Here, the Inspiron 3000 is the entry-level series in Dell’s Inspiron lineup of laptops. That means you’ll find the company’s most affordable laptops under this tagline. Usually, these laptops have Intel UHD graphics (or an entry-level Nvidia GPU) and either 4 or 8GB of RAM. In terms of processing power, you get an older generation of Intel processors though models with the newer 10th gen Comet Lake CPUs are also available (at a bigger cost, of course). The Inspiron 3000 series of laptops are suitable for young students or others whose requirements from a laptop are basic web browsing, watching movies, maintaining documents, etc.

An upgrade from the 3000 series, these are the mid-range options of Dell’s Inspiron series of laptops. They have a relatively better performance, build quality, and more. Though the Inspiron 5000 series is an upgrade, it is also suited for the same category of users like students, entry-level programmers, enterprise users, etc. You can find 13, 14, 15, and 17″ models of Dell Inspiron 5000 series laptops in Nepal, powered by either Intel or AMD CPUs. But as of now, the bigger 17″ models aren’t available.

Moving along, the Dell Inspiron 7000 series emphasizes a comparatively powerful performance on a sleek, metallic body with a luxurious finish. With this, the Inspiron 7000 series is more suited for corporate, enterprise, and other sorts of professional users. These laptops are currently sold by ITTI and Neoteric. All of these are powered by either 10th/11th gen Intel processors. Furthermore, all the entries in this list share a somewhat similar spec-sheet.

Gaming laptops have been big for quite some time now and no way was Dell going to leave it untouched. Under the company’s ‘G’ series of gaming laptops, you can choose between “G3”, “G5”, and “G7” models which come with different designs & the level of performance. To tend to the gaming needs, the Dell ‘G’ series of laptops are equipped with decent processors and more importantly, a powerful GPU. Here in Nepal, you can find Dell’s gaming laptops with GTX and even RTX 20-series graphics. A couple of Alienware lineup of gaming laptops are available as well.

The “Vostro” series (as cool as it sounds) was a very popular lineup of Dell laptops back in the day, which was especially targeted for the corporate users. However, it was temporarily discontinued in 2013 by the company citing changing technology and lesser demand. These laptops have a sleek and professional design with a decent spec-sheet & enhanced security options too. Neoteric too has abandoned the Vostro series in Nepal and it’s now only available through third-party unofficial distributors.

Another business-oriented lineup of laptops from Dell is the “Latitude” series. But unlike Vostro, this is still in production. These also come in a more professional design with a great finish. So if you’re one of the target consumers, this can be a great option for you. Having said that, the ones available in Nepal don’t quite pack a punch (especially in terms of graphics) so I’d highly suggest you go for a better option in the Inspiron series instead with a dedicated GPU.

Like the former, Neoteric doesn’t have any stock of Dell’s Latitude series of laptops in Nepal. And at the moment, other resellers don’t have it stocked either.

Dell’s XPS (Xtreme Performance System) lineup of convertible laptops is arguably the most praised Windows laptops in the world. It is known for its high-performance capability on a small, compact, lightweight, and ultimately portable build. However, because of the compactness, it sacrifices on a powerful GPU and thus isn’t the best choice for tasks like video editing, or pushing through AAA titles though its prices would suggest otherwise.