DJI recently unveiled the second iteration of its Pocket series miniature cameras—the DJI Pocket 2. As the name suggests, it fits right in your pocket. But do not underestimate its size because you can shoot some really amazing videos with this one. Let’s find out more in this review of the DJI Pocket 2.

First of all, the DJI Pocket 2 comes in two variations. One is the normal pack, where you get the camera itself and some other basic things while there’s also the Creator Combo, which is the one I have here with me. This package is specially designed for creators and comes with a bunch of additional accessories like a microphone, an additional wide-angle lens, a cute little tripod, a joystick controller, and a bunch of extenders. If you are confused about which one you should get, well, unless you are a professional, a diehard enthusiast, or a video creator, getting the creator combo is not going to be fruitful. Then again, it’s your preference and money, so I can’t say! But regardless of which version you choose, you get a cover/protector that comes in really handy while shooting because apart from the camera itself, it can fit the wide-angle lens and a couple of other things inside which helps manage your stuff.

With that out of the way, let’s now kick things off starting with the design itself. This one’s probably one of the smallest cameras I have ever used. Its form factor is very similar to its previous version and it fits in your hands well easily. So even with long hours of shooting, the Pocket 2 does not get uncomfortable. It’s just that the placement of the power button sucks and even when you’re just holding the camera, you tend to accidentally press it. Having said that, you do get a longer extender, called an all-in-one handle, that helps the situation a bit.

Talking of buttons, on the front, there are two: one for recording, while the other button lets you switch between photo and video modes. As I mentioned earlier, there’s also a joystick controller that needs to be attached separately. The joystick helps control the gimbal movements and the side button is for changing gimbal settings. Talking about gimbal, the DJI Pocket 2 has a 3-axis stabilizer that lets you choose between tilt lock, Follow, or FPV modes.

Still, a slight let down in the design front is the fact that this camera does not have waterproofing of any kind, so you will have to be extra careful with it. However, there is a separate case that can waterproof the device, but the catch is that you will have to buy it separately.

Anyway, before getting to the core camera performance, let’s talk about what these cameras are capable of first. Using the DJI Pocket 2, you can shoot stable normal footage up to 4k 60fps, 64MP photos, panoramas, Timelapse, and slow-mo at 1080p resolution in either 120 or 240 fps.

Talking of the core camera performance, I’ve loved how the contents shot from it are sharp and portray very natural colors. I used the Insta 360 One R cameras before this one and the footage from it looked color processed straight out of the cameras. So, if you like a subtle yet natural color scheme, DJI Pocket 2 is a treat. And that’s not just in the rear footage, the camera does maintain a natural color tone in selfie videos as well. If you have watched our review of the Insta 360 One R cameras, you would know that its selfie videos don’t have very good colors. But from Pocket 2, I faced no problems regarding color reproduction or skin tone.

Note that I clicked all the videos in auto mode. But there’s also a Pro mode, which is just like manual mode in cameras that lets you play around with ISO, White Balance, shutter speed, and such.

Now, back to its video capabilities, the stabilization even in the highest of resolutions is commendable. Here’s a video of me running and it’s evident from this footage that this camera can handle movements very well. Plus, because Pocket 2 is a gimbal + camera, so you shoot in different modes and get creative shots without much hassle. As mentioned in the beginning, there’s a wide-angle lens too that attaches magnetically to the camera and lets you shoot with a wider perspective whenever you deem necessary.

Also, I love its active track feature. Basically, it actively tracks the subject’s movements and tries to keep them in the frame. This feature is really useful when you are recording by yourself as you don’t need another person to adjust the frame for you all the time. So, if you make dance covers or if you are a vlogger, I am sure you know how this feature will make your life easier.

Moving on, I also tested the camera quality during nighttime and well, it’s nothing out of the ordinary. The footage does not come out grainy even at extremely low light conditions though, such as this one where my sister is feeding some street dogs. To top things off, I can assure you that the footage from the Pocket 2 has turned out brighter than the actual ambient lighting.

What about the microphone?

Likewise, I don’t think the built-in microphone is necessarily bad in performance even when recording in a crowded place and it easily suffices for general recording purposes and vlogging. But, if you want better audio, you can opt for the extra microphone which sounds more professional and fuller. Again, let me remind you that the microphone is only available in the creator combo pack!

Moving on, the DJI Pocket 2 can also shoot photos in either 16 or 64MP resolution. They are not as sharp as you would get from your smartphone but are okay for casual photography. Additionally, it lets you shoot in RAW format so you will be able to post-process it as you like. But if you are not into that, you can simply click a JPEG picture.

Now, let’s talk about the DJI Mimo app. You might have noticed that the content display screen here is rather small which is to be expected from a pocket camera. This makes it difficult to view or record videos. As a counter-measure, DJI lets you connect your smartphone with the Pocket 2. All you have to do is, attach the USB-C connector to the camera and then connect your smartphone. Now, you can view the camera’s content directly on the phone in real-time. And because you have to take off the gimbal controller to attach the said USB-C connector, the app facilitates by providing all the camera and gimbal functions on the app itself. By the way, the company provides a separate lightning connector too for iPhone users.

Here, the app is very simple and easy to get along with. I like the fact that DJI gives all the info on how to get started and operate the camera through the app itself. You just need to click the button on the top right and there is everything you would want to know about the Pocket 2, its app, etc.

There is something called an AI editor that helps you effortlessly generate attractive videos. There are several templates with different themes that you can apply to your content and make them interesting and fun. All you have to do is choose a bunch of relevant footage and select the theme you prefer and that’s it, you have your video right there.

But I do have to tell you that the Insta 360 One R cameras I reviewed before had a more extensive selection of such templates in its app which was a lot more fun than what DJI offers in its companion app. As mentioned earlier, the DJI Mimo basically gives a lot of information to its users regarding how to go about things but has very less practical usage in terms of actual video creation.

How does it compare against a flagship phone?

Okay, besides all this, I think it’s valid for one to think that the DJI Pocket 2’s capabilities are more or less similar to that of a high-end smartphone. And that is exactly what I had in mind too. The fact that modern smartphones like Samsung’s Galaxy Note 20 Ultra or the iPhone 12 Pro Max boast video shooting capabilities that go up to 4k 60fps with OIS sounds very similar to what you get with the DJI Pocket 2. 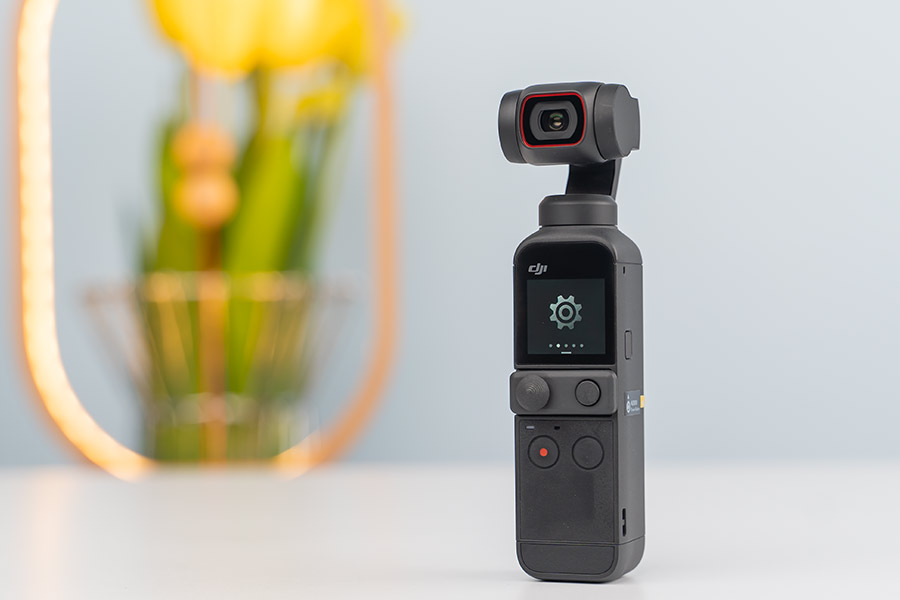 As a result, for this review, I compared DJI Pocket 2 with the iPhone 12 Pro Max. First off, I found a difference in color processing where the DJI Pocket 2 had very natural colors out of the camera. I noticed the dynamic range to be pretty similar while the 12 Pro Max had a slightly sharper output. The main point of difference however lied in the stabilization front between the two devices. While you walk at a steady pace, both of them give out a similar output. But when you run or have abrupt movements, the DJI Pocket 2 outshines the 12 Pro Max by a huge margin; all thanks to its 3-axis gimbal stabilization.

So yeah, the DJI Pocket 2 adamantly goes beyond the capabilities of a flagship smartphone. It is a capable action camera with a gimbal that even professionals can get behind.

To conclude, I think the DJI Pocket 2 is a great miniature camera. Its main selling point is most definitely the fact that it is an incredibly portable 2-in-1 camera plus gimbal that can shoot amazingly stable footage. As a result, it’s a great option for beginner videographers or vloggers. Also, using the Pocket 2 is not a hassle like with other action cameras I’ve tested recently, where one has to carry a lot of separate accessories like a selfie stick, monopod, etc. In contrast, the DJI Pocket 2 is very easy to get along with.