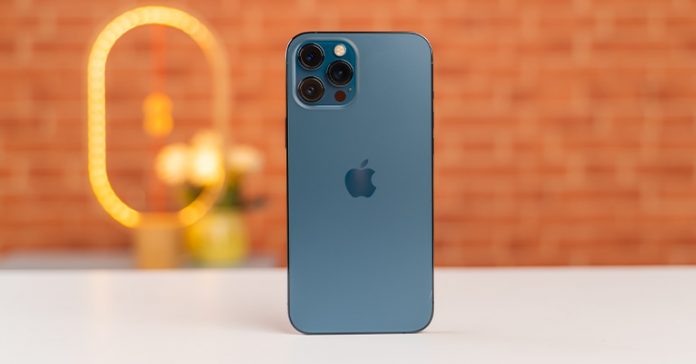 I’ve loved using my iPhone 12—it’s my favorite phone right now. I have already discussed all about it and why I chose it over the 12 Pro in its full review. Anyway, for the past 4-5 weeks, I have been using the iPhone 12 Pro Max, which is the best iPhone of the year—at least when looking at the spec-sheet of all 4 models. But is it really the one for you? Let’s find out more in this long-term review of the iPhone 12 Pro Max.

Compared to the regular iPhone 12 or the 12 Pro, it brings a bigger display, a bigger battery, and a better camera sensor. If you want the best-in-class iPhone of the year, this is it. Yet, before I deliver my final verdict about the Pro Max, I was quite disappointed with Apple on how the company failed to effectively differentiate the iPhone 12 lineup.

I mean, there’s really not much to say when talking about the distinct/exclusive features on the iPhone 12, 12 Pro, and 12 Pro Max. What this all boils down to is that for most people, trust me when I say that the regular iPhone 12 is perfectly fine.

Throughout my usage of the iPhone 12 Pro Max, its wide, bulky, and heavy build quality resulted in many instances of discomfort. This phone outweighs and out-bulks the Samsung Galaxy Note 20 Ultra—a device revered for its boxy design.

Personally, I feel like the iPhone 12 takes the crown for the perfect tactile feel among this year’s iPhones. It is compact and holds a strong grip in the hand. That may be because of how small my hands are too. But the 12 Pro Max, on the other hand, is exactly the opposite. With its wide footprint and slipperiness because of the stainless steel frames, you’re more than likely to drop the phone as well. Not just that, but it’s a fingerprint magnet too.

Because of all these reasons, I would highly advise you to put on a decent case, which ironically further takes away the already-non-existent comfortable feel in your hand or pocket.

Moreover, you may have heard about Apple’s Ceramic Shield protection debuting with the iPhone 12 lineup, which promises 4x better drop performance than previous iPhones. While that is a pretty exciting development, it only applies to the front of the phone. So, if you wish to protect your iPhone 12 Pro Max from breakage, a strong case is all the more important.

Likewise, when comparing it to last year’s iPhone 11 Pro Max, it’s evident that the 12 Pro Max is the bigger of the two because of the bigger display. However, what’s unusual is that even though the former has bigger width, the iPhone 12 Pro Max still feels thicker on hand. This is major thanks to Apple’s decision to shy away from the curved edges on earlier generations of iPhones to flat boxy frames like the iPhone 4 from back in the day.

So, if you’re accustomed to lightweight phones and one-hand usage is of priority to you, my suggestion would be to skip the iPhone 12 Pro Max and get the regular iPhone 12 instead. 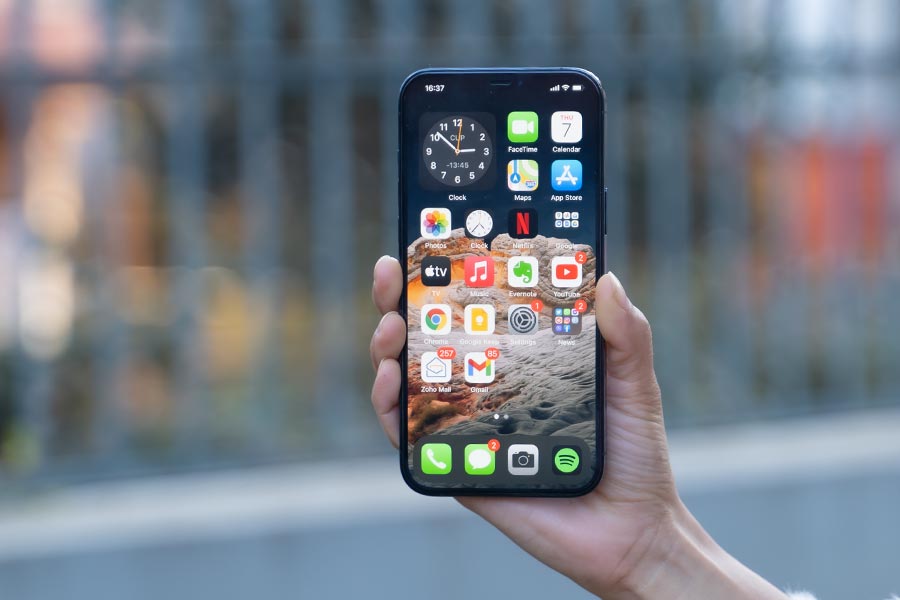 On to the display, the iPhone 12 Pro Max has a 6.7-inches Super Retina XDR OLED screen. While we’re pretty much used to a big screen like this from various Android smartphones, the problem with this one is that Apple’s iOS isn’t well-optimized for single-handed use. Take Samsung or OnePlus for instance. Both these vendors have heavily curated their Android skin to be easily usable with one hand on a big phone. iOS falling behind Android in terms of software optimization is quite uncharacteristic of Apple.

For example, it’s difficult to access the folders on the side when you are in the Control Center. Likewise, even though Apple has eased unlocking the phone via the PIN code at times when we’re required to wear a mask, typing in the PIN on the iPhone 12 Pro Max is uncomfortable.

Maybe the company should’ve gone with a side-mounted Touch ID. In fact, this was one of the big expectations from this year’s lineup of iPhones seeing how it introduced one in the new iPad Air. So, Apple definitely has some work cut out for itself to improve reachability and usability in its bigger iPhones—and I hope that it brings out an update addressing this very same issue in the coming iOS version.

Regardless, because of the big screen, content consumption on the iPhone 12 Pro Max is amazing. Its bright, vibrant, and color-accurate OLED display paired with the stereo speaker setup results is a wonderful viewing experience. Having said that, Apple is still not jumping on the high refresh rate bandwagon as the entire iPhone 12 lineup is still stuck with 60Hz displays. Don’t call it a conspiracy theory but it’s likely that Cupertino doesn’t want more than one BIG talking point in one generation of iPhone. For this year, it was 5G. So maybe, we’ll see the smooth display tech on an iPhone next year.

Let’s talk about the performance now—which honestly could be the most positively boring topic when talking about an iPhone. So, I’m not going to talk much regarding it in this long-term review of the iPhone 12 Pro Max. The new A14 Bionic chipset is, as you’d imagine, one of the best performing mobile chipsets. So much so that it even outperforms some of the newer laptop CPUs.

Besides sheer speed, this silicon also makes an incredible camera feature possible on a smartphone for the first time ever. Let me get back to this in just a minute. If only it had a high refresh rate display, the entire user experience would’ve been something entirely different. Finally, it’s time to get into the cameras. In a bid to differentiate the 12 Pro and Pro Max, the one area Apple felt was important are the cameras. As a result, the 12 Pro Max has a 47% larger 12MP primary sensor compared to the 12 Pro. With this, the company claims that it can let in 87% more light for superior low-light performance. As anticipated, this doesn’t matter much when shooting in daylight or in any ambient setting with enough lighting.

Unlike different Chinese smartphone vendors, Apple chooses not to vary the camera optimization on different phones. Maybe that’s because of the chipset similarity or the company’s principle.

Because of this, there’s not much of a difference between the images among the iPhone 12 series. However, the 12 Pro Max does deliver better lowlight photos and the processing time to take night mode images is also noticeably faster.

Moving on, I also compared its cameras against Samsung’s Galaxy Note 20 Ultra. The results speak for themselves.

As you can see, images from both phones look incredibly similar.

Photos turn our relatively more natural on the iPhone 12 Pro Max on one occasion, whereas the Note 20 Ultra does the same in different instances. The same can be said for the wide-angle shots.

Yet, the iPhone’s superiority becomes crystal clear when it comes to portrait images. From the bokeh effect to details to skin tone, I’m fond of the portrait shots on the 12 Pro Max. Hopefully, Samsung has found a way to improve on this aspect in the upcoming Galaxy S21 series.

Here, Apple is offering a higher zoom capacity on the 12 Pro Max compared to the 12 Pro. While the former boasts 2.5x optical zoom, the 12 Pro makes do with its 2x lens. Not that big a deal but—it is what it is. Anyway, because of the 2.5x zoom, the portrait images turn out way too zoomed in, so be sure to stay adequately further away when taking one. I’d really like to see multiple zoom lenses with different focal length on future iPhones.

In terms of selfies, just look at these samples.

You can clearly tell that the ones from the iPhone 12 Pro Max are better than the Note 20 Ultra.

As usual, no other phone compares to an iPhone when it comes to videos. I’ve already praised the video capabilities of the iPhone 12 and 12 Pro. Add the Sensor-Shift OIS technology and the bigger sensor on the 12 Pro Max, you can take even better and properly stabilized videos under day or low-light conditions from this phone.

Additionally, the iPhone 12 Pro series also supports ProRAW photos, which is missing on the smaller iPhone 12 and 12 mini. But throughout my usage, I didn’t feel the need to use it at all. That’s because Apple’s image optimization is more than sufficient for casual photography. Yet, you can make them better in the post by editing the RAW images.

Similarly, the iPhone 12 Pro Max, just like the 12 Pro features a LiDAR scanner too. Although it does help in portrait shots as well, its primary use case is on AR applications. I found this cool app called “Polycam” that can generate a 3D image of your room using the sensor. This might come in handy for engineers, architects, or home renovation professionals.

Despite all this, I do have one issue with its cameras. I often encountered random lens flare whenever trying to take photos with a bright light source like the sun or other indoor lighting equipment in the camera-view. It’s most likely because of how significantly the triple camera lenses at the back protrude. So, to avoid the lens flare, I have to hover my hand above the camera. While many Android OEMs initially mocked this move, they are sure to follow in on Apple’s footstep eventually. Anyway, besides the unavailability, the bigger problem I have with charging an iPhone is the lightning port.

While every other Apple product has shifted to using a USB Type-C connection, it’s pretty disappointing to see the lightning port on an iPhone. I recently shifted to a MacBook after having used a Windows laptop for so long. And this USB-C/lightning port inconsistency is really frustrating. Watch out for our review of the Apple M1-powered MacBook Pro by the way. However, the company’s rigidity might be an indication of future iPhones going completely portless.

That might also be the reason Apple resurrected the MagSafe charging mechanism. I didn’t buy one because of the price tag and how slow it charges. I thought the charging speed of a 15W MagSafe and a 20W wired charger wouldn’t be that much but it turns out, the former takes almost 3 hours. So, I don’t think it’s worth the money.

For wired charging too, you need to get a separate 20W fast charger, and it takes about 1.5 hours to fully juice up the iPhone 12 Pro Max. It’s not necessary to get an Apple power brick, and you can get a PD-certified fast charger. For instance, you can charge this phone using a 25W PD charger from Google or Samsung.

To wrap it all up, after using the iPhone 12 Pro Max for a little more than a month, I have mixed feelings. Yes, it’s the best Apple has to offer this year and comes with premium camera features like ProRAW, LiDAR, etc. Plus, it has a really good display, battery life, and best-in-class performance. However, these can be found in the regular iPhone 12 as well. And personally, I find the iPhone 12 and 12 Pro to have the perfect form factor. Besides the 12 Pro Max being bulky and heavy, the lack of iOS optimization on such a big phone makes for an irritating one-hand usage experience.

Therefore, for most general users, iPhone 12 and 12 Pro is the better option this year, unless you are set on getting a big phone. And this is a problem for Apple. I think they should have given something better to differentiate the iPhone 12 lineup, maybe faster charging, smooth refresh rate, or a UI little different than it is. For now, the iPhone 12 Pro Max just feels like a bigger, more expensive version of 12 Pro—which sacrifices ease of use.