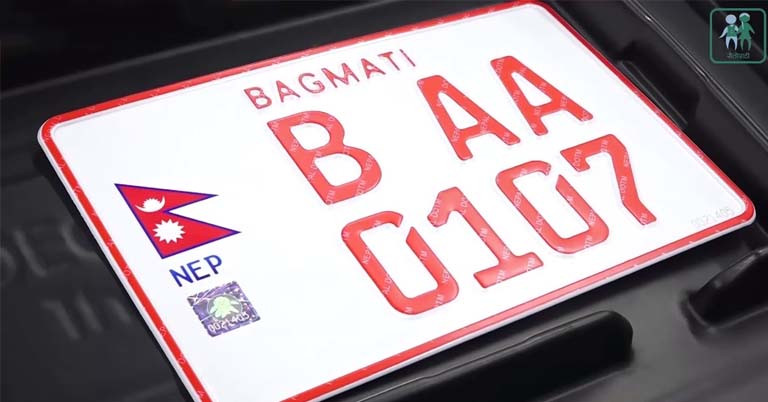 The government had brought the notion of embossed number plates on vehicles a few years back as well. In practice, the implementation has been limited to a small number of vehicles only.

Nonetheless, it will now be obligatory to install an embossed number plate from the first month of the upcoming fiscal year 2078/79. This implies that all two-wheelers, four-wheelers, and large vehicles must go through the installation of RFID (Radio Frequency Identification) based plates from Shrawan.

Director-General of the Department of Transportation Management, Namaraj Ghimire, says that “embossed number plates are made mandatory for new vehicles and vehicles to be renewed from next Shrawan with the objective of their scientific management”.

All kinds of technical works like the refinement of the form filling system are already complete. Additionally, the department has aimed to install new number plates on all types of vehicles within the next three years.

Once embossed number plates are implemented, the government will obtain integrated details of vehicles throughout Nepal. It will also help in the investigation of suspicious activities if criminals use vehicles with such plates.

In addition, since the number plate must be cut off to remove it completely, it is less likely that vehicles are stolen or illegally driven.

Besides, as embossed plates are equipped with RFID, the location of the vehicle can be easily tracked in case it’s stolen. Now, the police don’t need to look at the Blue Book, as the tagged-on RFID device will show if the owner has paid off the tax or not. The number plate also features a built-in chip that can show the owner and the vehicle details.

According to the department, two-wheelers and four-wheelers (small & medium) will need to pay a charge of Rs. 2,500 & Rs. 3,200, respectively for an embossed license plate. Likewise, you’ll need to pay Rs. 3,600 to acquire one if you own large vehicles. To date, 18,000 vehicles in Nepal equip embossed number plates.