Facebook revenue is mostly generated via advertisements. It has become rather less of a social network and more of an advertisement platform nowadays. Sooner or later you have to realize that all you ever were to Facebook was a piece of data that viewed advertisements. 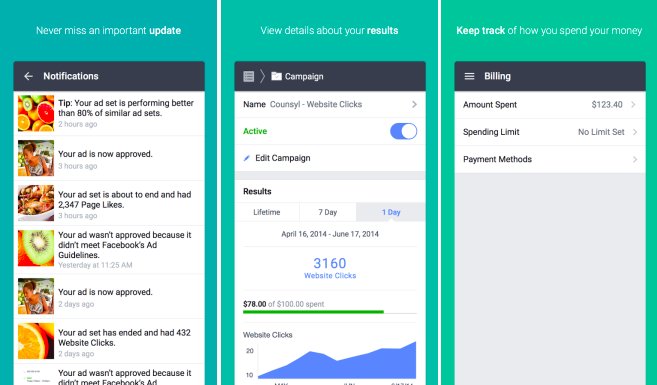 A lot of the Facebo0ks income is generated via advertisements and people spend a shitload of money when it comes to advertising on Facebook. There are more than 800,000 advertisers on Facebook and more than 2million businesses use Facebook Advertisement. Facebook Ads Manager mobile website was launched last year, but it was not every advertisers paradise. To make the task more convenient, Facebook has introduced the Ads manager App for both Android and iOS which allows advertisers to:

The app notifies advertisers when their ads are about to end also when they will hit their spending limit. They can also see how much they have spent at any time. This is a crucial app if you are running or promoting your business through Facebook.