For years, Apple has been ahead of Google when it comes to privacy features. But, Google is finally trying to catch up. Earlier this year, the company announced an iOS-like feature for Android, allowing users to opt out of app tracking. Now, it has rolled out end-to-end encryption globally for Google Messages.

It sure sounds shocking, but Google Messages, the default messaging app for Android, did not have end-to-end encryption before this. It even managed to avoid the spotlight when there was a public outcry against WhatsApp’s latest privacy policy.

What is end-to-end encryption, anyway?

Reversing the process requires decrypting the message using a key, which is only available to the sender and receiver. Thus, even if the message is stolen during the transmission, the content will be protected from the unwanted actor.

It is not just about hackers trying to steal your messages. E2EE protects you from the SMS app itself (though it depends upon implementation). Technically, SMS apps can read your messages if they do not have E2EE enabled. Some apps backup your chats using third-party cloud services. These services can technically read those backup files in absence of E2EE.

Late to the party

Google first announced end-to-end encryption last year. Users had to opt for Google Messages beta to be able to test it. The feature is now getting a global rollout. In this regard, Google is late to the party as almost all major messaging services have had E2EE for some time now. This includes Apple’s iMessage and third-party apps like WhatsApp, Telegram, and Signal.

According to Google’s White Paper, Google Messages uses Transport Layer Security (TLS) across RCS (Rich Communication Services) servers for encryption. Thus, E2EE is only possible when both users are using Google’s RCS client and have E2EE enabled for the particular conversation. Enabling E2EE will add a lock in the send icon. 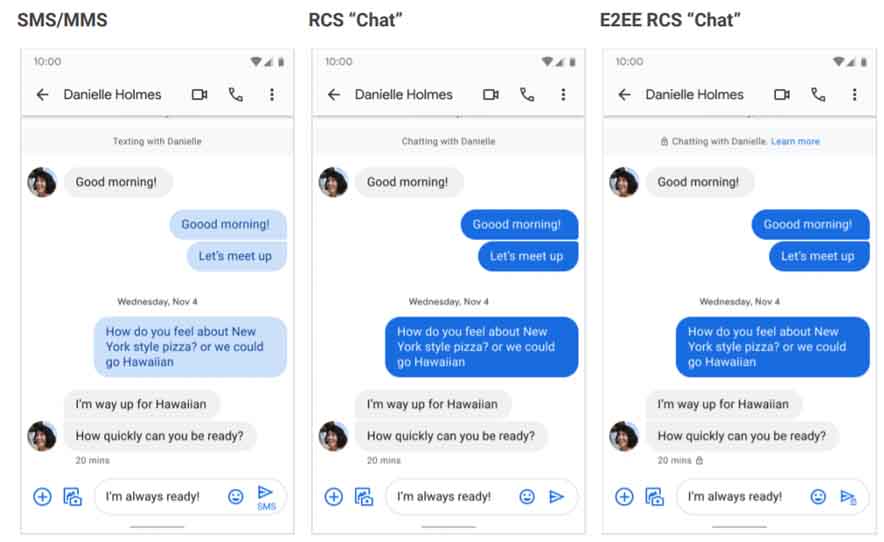 In addition, both the sender and recipient must be on active Wi-Fi or mobile network. If the recipient is offline, the message will be stored in a server until the user gets online. In the case of the sender, s/he needs to go online or fall back to traditional SMS/MMS (without E2EE) to send a message.

Still, there are limitations to the end-to-end encryption on Google Messages. To start, it is not yet available in group messages. Also, you will have to pay special attention if you use a Wear OS smartwatch. Message synchronization between Google Messages and Wear OS happens over Bluetooth and Google Cloud. E2EE is not available on the latter. Thus, you will have to disable Cloud Sync manually to prevent breaches during synchronization.