HP is undoubtedly a huge name in the portable PC market. The company’s Spectre-series brought something relatively new to the table, not that it was revolutionary but it was fresh nonetheless. Well, the new HP Spectre 13 x360 2018 is now even fresher, cleaner, sharper and in fact better in any way possible.

The Spectre 13 x360 is now available in two colors, Dark ash silver, and Poseidon Blue, the latter $10 more expensive than the former. The HP Spectre 13 x360 comes in an all-new Aluminium chassis with a blue Sandblasted finish. It also features narrower bezels and a smaller footprint than it’s predecessor.

The HP Spectre 13 x360 comes in a much more angular and sharp design choice than before. A striking feature for me was the USB C port at the edge of the chassis [picture of it below]. If you put numbers to the context, the new laptop is now 14.5mm thick and 1.3Kgs heavy. The HP Spectre 13 x360 comes with 8th Gen Intel processors. It’s based on the Whiskey Lake architecture, the third refresh in their 14++nm process. There is an increased Turbo clock speed, native USB 3.1 Gen 2 support, integrated 802.11ac Wi-Fi, Bluetooth 5.0 and support for Intel’s own Optane memory. It’s also even more power efficient than before.

Also Read: Top 5 Applications you need to install on your new Gaming PC/Laptop 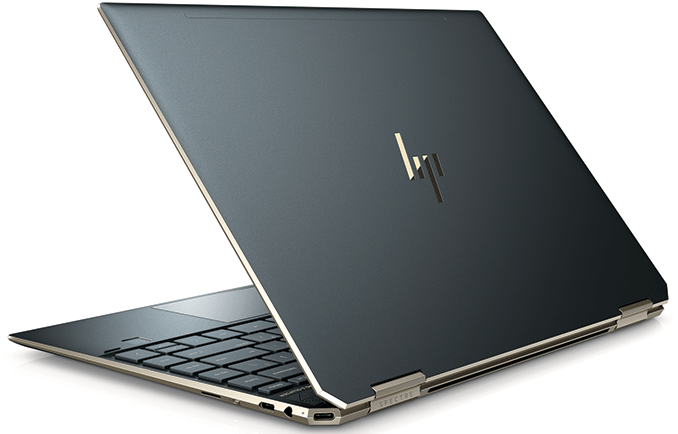 You get three display options here. The first one is a base FHD IPS WLED display with edge-to-edge glass multi-touch display. Add $40 to that and you get the same display with an Integrated Privacy screen [watch the video below]. Then there is the $160 upgrade form for a 4k IPS display.

All displays cover 100% of the sRGB color gamut with 400 nits of brightness and are touch sensitive. While the 4k panel will suck up more power, the FHD display comes with an ultra-efficient panel with just 1W of power consumption. This is one of the main reasons why the HP Specter 13 x360 can reach 22.5 hours of battery runtime.

Talking more about the battery, it stands at 60Wh. In real life usage, HP claims a boost of around 37% over its previous generation. That comes to a total of 22.5 hours, assisted heavily by the low power consumption panel and a pretty power efficient CPU.

Security was also a priority while designing the laptop. It comes with the usual fingerprint reader, pre-installed TPM module, a SureView privacy display and a mechanical switch that disables the webcam electronically.

HP also announced a 15-inch variant of the HP Spectre 13 x360 that comes with an optional Nvidia GTX 1050Ti MaxQ design for added graphical power but lacks the LTE modem. The bigger one also gets Quad-Speakers, a full Numpad, and a respectable battery life claim of 17.5 hours. It however only comes with a 4k panel and weighs about 2.1Kgs.

The HP Spectre 13 x360 is already up for sale here for a base price of $1,149.99. The 15-inch version starts at a slightly higher $1350. Both laptops are pretty great at this point, with HP opting to not just update the internals but also the overall design of the laptop. It will be interesting to see how other manufacturers, especially the XPS makers react to this laptop in their next refresh.