However, for some, even the FOV in a panoramic shot might seem less than sufficient. Yes, people nowadays want to capture everything that’s going on in and around them. But how’s that going to happen? Well, one way would be to take a series of photos and merge them together. However, it will result in the picture being a little distorted near the edges where the photos are stitched. The other much simpler way would be to use a 360º camera. And that’s precisely what I have today – the Huawei EnVizion 360 camera. Let’s find out more about it in the review.

Though it may look a bit bulky at first glance, this is one of the smallest 360-degree cameras available. The device has a rounded square shape with a plastic-like glossy surface surrounding the camera lens. The one I’ve with me has a darkish silver glossy look. From what I know, there are multiple color options available depending upon the country where you buy it. There are two 13MP cameras on each side of the Huawei EnVizion 360. The device is sort of ballooned up in the area where the cameras are situated thereby giving it a bulky look. Even after carrying the device in my pockets for weeks, I couldn’t get the hang of the bulgy feeling it gave. However, I feel that it is a small price to pay for its benefits. Furthermore, the pouch that the EnVizion 360 comes with prevents it from any scratches. What’s more, you’ll need to install the Huawei 360 Camera app from the Play Store, and thus doesn’t support your phone’s native camera app. This app initializes the camera and provides plenty of options that you can use as per your requirement.

Images can be captured in various modes such as perspective, fish, planet, and VR. You have the option to change the picture resolution, the preview mode and activate the picture-in-picture (PPI) mode.

Basically, the quality of the image in the preview and in the actual photo will differ a lot. In the preview mode, there’s a Standard recommended mode and an HD power-intensive mode. But frankly speaking, on my Samsung Galaxy A80, the difference between the two modes was negligible. The only thing “HD power-intensive mode” did was drain the battery a bit faster, compared to Standard mode. And while we are on that topic, let me tell you that Huawei EnVizion 360 relies on your smartphone’s battery for power, meaning it doesn’t have a battery of its own. However, power consumption is also not that much. I mean obviously, an extra accessory will use more power than your in-device camera but that’s quite insignificant in EnVizion 360’s case. The other feature that’s available here is PIP, i.e the picture-in-picture mode. To be honest, it took me a while to figure out what this option actually did. Generally, this mode would mean that the app requires permission to draw over other apps. But that’s not the case here. There’s actually a little box-like icon in the preview section that once pressed will show you the complete 360 images to be captured. However, the image is shown on a horizontal axis.

Design and feature aside, would it even be a camera review without talking about the images that it produces? As mentioned earlier, the Huawei EnVizion 360 is not a standalone camera. So, obviously the photo that it captures will not have the same level of details that your smartphone camera would produce. However, it is not designed with that detail in mind. For what it’s worth, the EnVizion 360 produces probably the best images than its competitors. 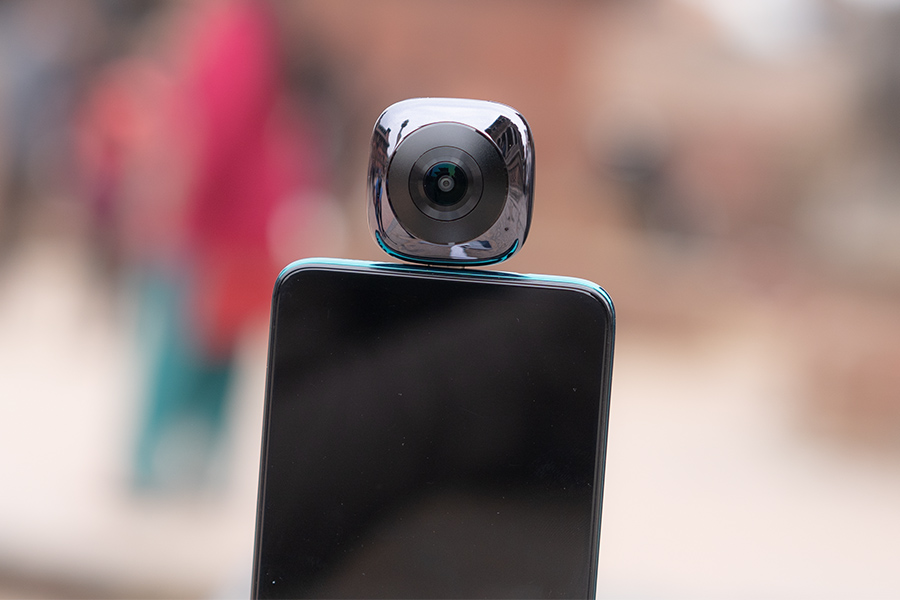 The photos that I’ve taken clearly show that the objects in the image are distinguishable. The edges are pretty well defined too.  Nevertheless, if you zoom in on pictures, you’ll notice that the closeups are not so good. Even in bright light, the device fails to capture the details in the object.

Sticking to the subject of bright lights, the area from which the light is illuminating your surroundings will almost certainly be overexposed. A sort of blurry effect on objects placed near the light source can be seen and their edges are distorted too.

Furthermore, pictures taken outside are rather good than those taken inside the room. But with proper lighting, images in either situation come out fine. However, what I believe is that you’ll get the best out of this device if the shots are taken outside.

Now, moving on to the low light-light images, the objects in the image come out to be okay-ish. And grains are clearly visible in these images.

The one thing that sort of bugged me in these images was the glitch lines. They appear in those parts where the images from both the front and the back camera are stitched together. Now, I know that’s how a 360 image is produced by this device, but those lines are very much apparent. Hopefully, in future upgrades, the company will look for a solution regarding this matter.

As for the videos, they’re pretty nice as well. You can check them out here, and here.

As I started using the device, I felt that it was something that I didn’t know I wanted. However, my initial excitement lasted for just a couple of days. The device has to be connected to the smartphone each time it needs to be used. And to be frank, that’s quite tiresome. Also carrying an extra device along with a huge smartphone was a hassle. Nonetheless, I guess that the Huawei EnVizion 360 will be quite useful for those who travel a lot and want to capture everything around them. And by everything, I mean 360º everything. However, it would be troublesome for normal smartphone users.

For me, as I earlier stated, carrying the device was the main problem. But priced at around $76.23, I would probably go for it. It allows you to capture something that your smartphone camera cannot and the image quality is not that bad either.

Having said that, accessories such as this might become a thing of the past very soon. I mean there are already quad-camera setups, as well as flipping cameras mechanism on smartphones these days. So, who knows when some smartphone maker will come with a technology that can take 360 photos from your smartphone camera without you having to move a complete circle holding your smartphone?

Until then, I guess these sorts of accessories are good enough to carry out the task.