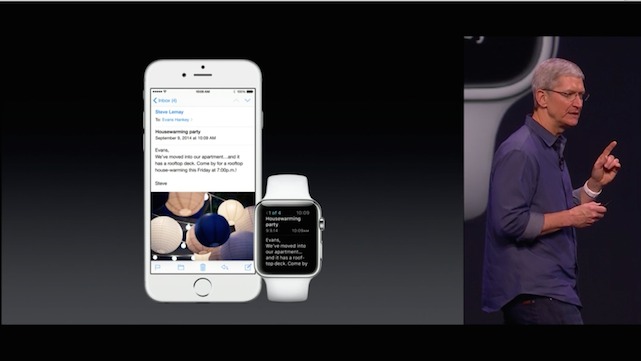 Yes folks, the day was yesterday! Many of you saw it live, many of you read it later, many of you might still be unknown about it but Apple Event on September 9th was in many ways a beginning of a new era for Apple phones and devices. How? Well, we’ve wrapped it up and made it easy for you to decide it for yourself.

Apple event yesterday saw the launch of two new smartphones, iPhone 6, iPhone 6 Plus and Apple watch. While on many ways new iterations of iPhone was a normal announcement, the announcement of smartwatch truly made the headline. Even Tim Cook seemed overly excited about it and so were the people at that event. Let’s sum up the devices in a brief look below:

iPhone 6 was unarguably the most required change in Apple smartphone era. With an increased screen size of 4.7 inches, iPhone 6 now proudly stands tall along its competitors.

Here are the key features of iPhone 6:

YAAY! Might be the first word for Apple fans when apple announced its smartwatch! It is a really good step forward for Apple since it is a product of its own category. It’s an awesome device, with awesome capabilities and very useful features. But on the design area, I was a bit let down. I would any day prefer the watchface of Moto 360 over Apple’s Watch. Apple has got real talented people in the design department for the likes of Jony Ive and a better overhaul can be expected when smartwatches really start rolling in the consumer market. For now, Apple Watch is a piece-to-admire!

Furthermore, The watch has a new “bubbly” interface specially designed for the watch usage. It is packed with sensors which help in tracking your fitness and help make you healthy. All in all, the Apple watch is a real smartwatch which does everything a smartwatch should do and nothing more. It will be up for grabs from early 2015 at $349. Apple Watch will come in three editions namely: Apple Watch, Apple Watch: Sport & Apple Watch: Edition. Wrapping things up, One more thing (as Steve Jobs says) that apple announced yesterday was Apple Pay. It is a not so new way of payment through NFC and Touch ID. Apple says, the data will be stored in a separate chip called Secure Element and will feature a dynamic code method which ensures security. The implementation and viability of this technology is yet to be seen. Although Google Wallet has been doing similar things already this step from Apple looks as if it is here to stay! Also, U2 fans can avail U2’s latest Album: Songs of Innocence for FREE! (Yes, you heard it right!) from the iTunes Store for a limited period of time!

The iPhone 6 will be available for buying from 19th September with the unlocked version starting from $649 whereas iPhone Plus can be bought from $749!

We expect these phones to come Nepal during Dashain with prices at whooping 95,000/- to over Lakh rupees for the bigger iPhone 6 Plus. After Tihar though, the prices should fall down to the respectable levels and be buyable! That’s how things work here, can do nothing about it! (sigh!)

Lastly, I’m really excited about the larger iPhones; iPhone 6 and iPhone 6 Plus which were the much needed overhauls for Apple Smartphones. Apple watch (though I loved the “iWatch” name) seems to be the first step of the smartwatch culture which we’ll obviously encounter in the near future!

Did you watch the event?

Liked what Apple released? Or didn’t? Have your say in the comments below!