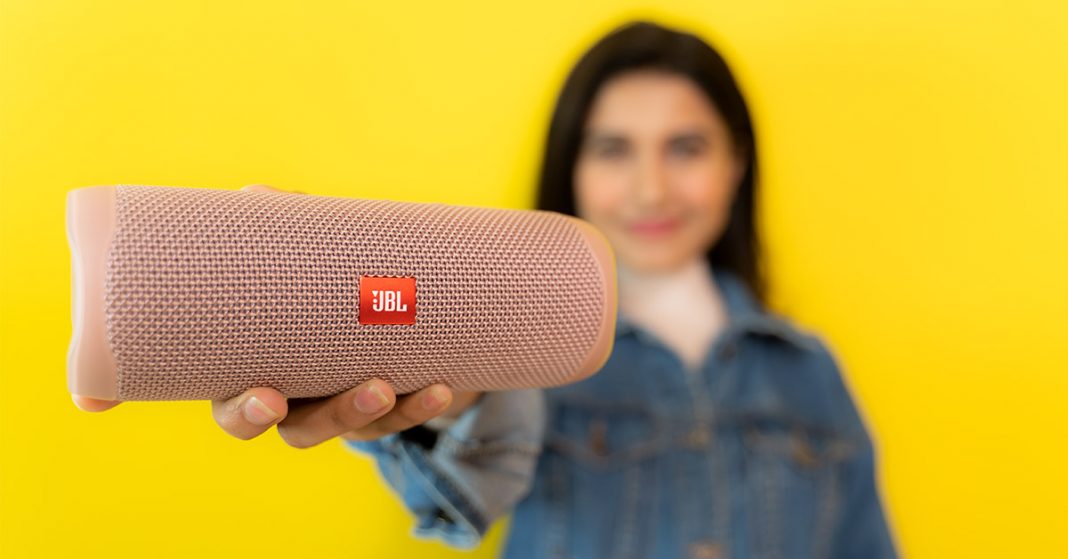 Bluetooth. It’s safe to assume that most of us are plenty familiar with the technology which has been connecting our smartphones and so many other IoT devices for decades. Considering the bandwidth and speed, it’s surprising that some new innovation hasn’t completely replaced it by now. Anyhoo, today I’m talking about a new Bluetooth speaker from JBL, the Flip 5. Will it rock your world? Find out all about it in this review.

For any speaker to be considered “good”, it has to… well, sound good. In the case of the JBL Flip 5, the audio quality is impressive. While the last-gen JBL Flip 4 came with two 8W drivers and stereo sound, the company has gone with a single 20W driver and a mono sound system on Flip 5.

Now, the switch from stereo to mono may already be an immediate turnoff for many. And normally, it would make sense. However, I think JBL made the right call by going mono on Flip 5. First of all, unless you are an audiophile or have an extremely keen pair of ears, the stereo sound can hardly be noticed and enjoyed on a speaker of this size. Therefore, due to the lack of use of different driver for each audio frequency range, for me, Flip 5 sounds more consistent and better than the Flip 4.

Add this to the bigger 20W driver, the Flip 5 gets loud – maybe too loud even. The volume level goes from silent, loud, louder, louder, to “in-the-middle-of-a-Newari-Jatra” loud. If it bothers you too much, you can turn on “Disable Absolute Volume” under your phone’s Developer options menu. The audio is clear, crisp, and the bass is commendable.

On the speaker’s end, you’ll find two passive radiators (rubber end caps) which are more rubbery than the ones in the Flip 4, which leaned on the plastic-y feel. These passive radiators are used to extend the low-frequency range (for soundwaves like bass) of the speaker.

If you’re still not sold on the Flip 5’s mono audio system, you can actually pair two Flip 5s and use them as a stereo sound system. But, most of us probably won’t be buying two units of the same speaker for a complete aural experience anyway.

Moving on to the design, the Flip 5 comes in a familiar wire-mesh grille body and has that rugged look and feel to it. You can also carry around Flip 5 with its lanyard that resembles a shoe-lace. Moreover, it is IPX7 waterproof so you rest assured taking it to pools or other similar environments. But, there is a 3ft/30minutes restriction, so do be careful. On the front, there are four tactile buttons; from left to right – PartyBoost, Volume Down, Volume Up, Play/Pause. You can skip a track by double-pressing the play/pause button, and that’s about all it can do. I had no problems operating the buttons since they are quite clicky and responsive. Also, you can easily distinguish which one is which, just by feeling them. On the back, you have the power and the Bluetooth button alongside an LED battery indicator and the USB Type-C charging port. 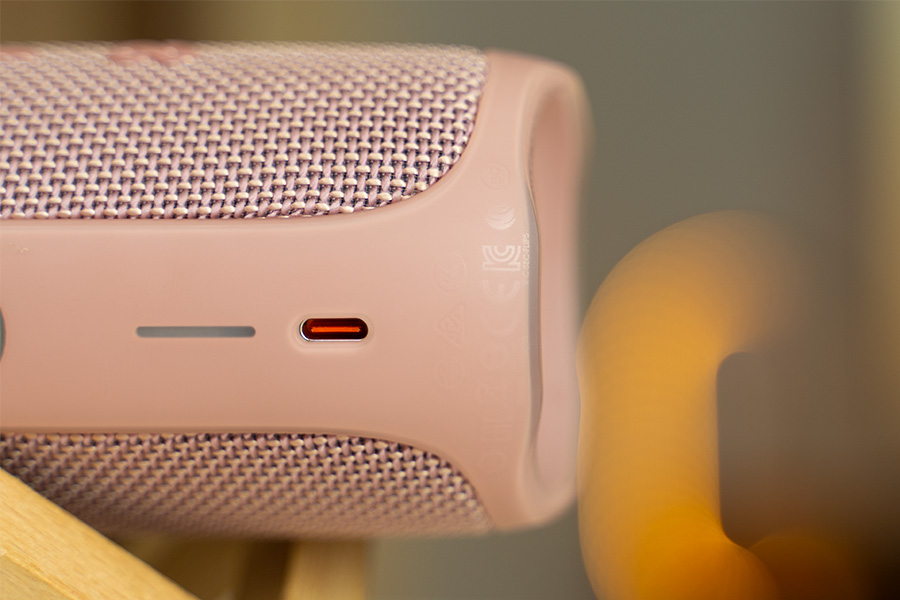 The indicator glows a single shade of white and fades as the battery wears down. I was a little skeptical about it at first, but with time, it has grown on me. Also, unlike Flip 4, there’s no flap covering these ports on Flip 5 which makes it a lot easier to get to.

The battery is another area where Flip 5 sees an improvement. Packing a bigger 4800 mAh unit, it now charges via a Type-C cable unlike Flip 4 which used MicroUSB for charging. Additionally, the charging time in Flip 5 has been reduced to 2.5 hours while the Flip 4 fully charged in 3.5 hours. Bravo JBL! In my time of testing, I played music through Flip 5 on moderate volume and it lasted me about 8 hours, in contrast to the advertised 12 hours. But of course – the louder you play, the lesser the battery life!

“JBL Connect” is the companion app for JBL speakers. Using this, you can use the “PartyBoost” functionality which I’ll get into in heavy details later on. Also, you can pair two Flip 5s and use it as Stereo (L/R) channels through the app. There’s not much else you can do from JBL connect. It displays the battery level and you can toggle “Audio Feedback Sound” on/off. 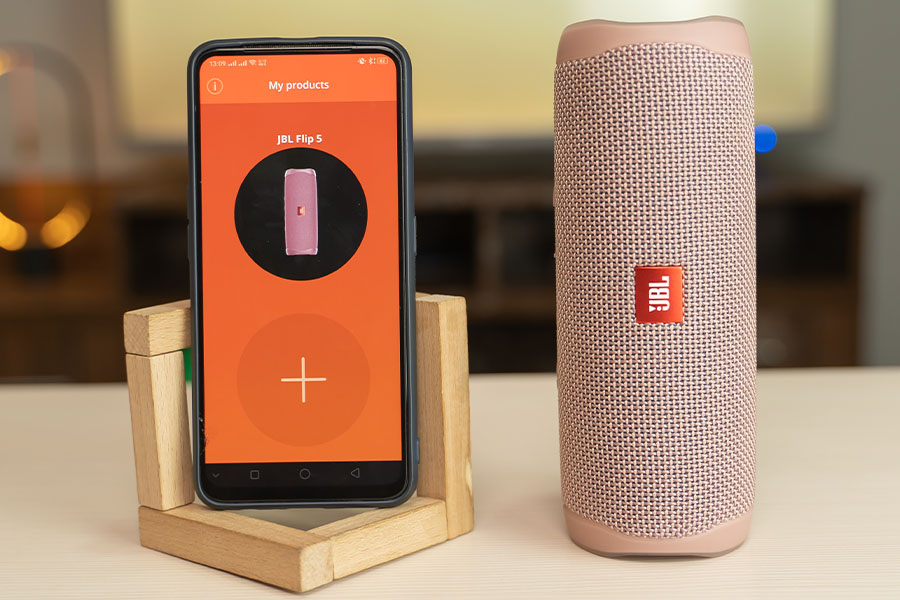 The app isn’t required for using the speaker on a general basis. You can simply power on Flip 5, turn on the Bluetooth of your phone (or other input sources) and the speaker and then listen as you please. I did, however, notice that when the devices were already paired, if I tried accessing the app, it would still take some time to recognize that my pre-paired Flip 5.

Had your fun? Now let’s get to the bad stuff.

There are plenty of feature omissions on Flip 5, which raises a major red flag for the speaker. First of all, it has no 3.5mm headphone jack, unlike its predecessor, thus making it a Bluetooth-exclusive speaker. What if you encountered some trouble with the connection but had a 3.5mm AUX cable laying around? Too bad! Flip 5 also doesn’t have an in-built microphone so you can’t take calls or use voice assistant unlike Flip 4. Such a crucial feature, why’d they remove it?. Even though communicating with Google Assistant and Siri on a Bluetooth speaker suffers from a noticeable lag, calls aren’t. The ability to talk with the whole family through a speakerphone is not possible on Flip 5 and that plain sucks.

Older-gen Bluetooth and the basic codecs

Furthermore, Flip 5 still uses Bluetooth 4.2 like Flip 4. Why didn’t JBL make a jump to Bluetooth 5.0? It provides a better range and higher data rate as well. Obviously, I don’t mean Flip 5’s Bluetooth is downright miserable. In my time of testing, I barely noticed any audio delays but the in-house range was limited to about 5 meters, which is not that spectacular. Beyond that, the “kryek-kreyk” ensued!

Besides this, Flip 5 doesn’t support high-end Bluetooth codecs like aptX, aptX HD and is restricted to A2DP and AVRCP which as the most basic audio codec for any Bluetooth device. When connected, your phone may show you the option to toggle “HD audio: SBC” on or off, but don’t be blown away by that just yet. The Sub-Band Coding (SBC) delivers worse latency and audio quality than the aforementioned high codecs.

But no, once again, the Flip 5 will not give you unbearable latency and aural experience. I’m just saying JBL could’ve gone with Bluetooth 5.0 and some better codecs. 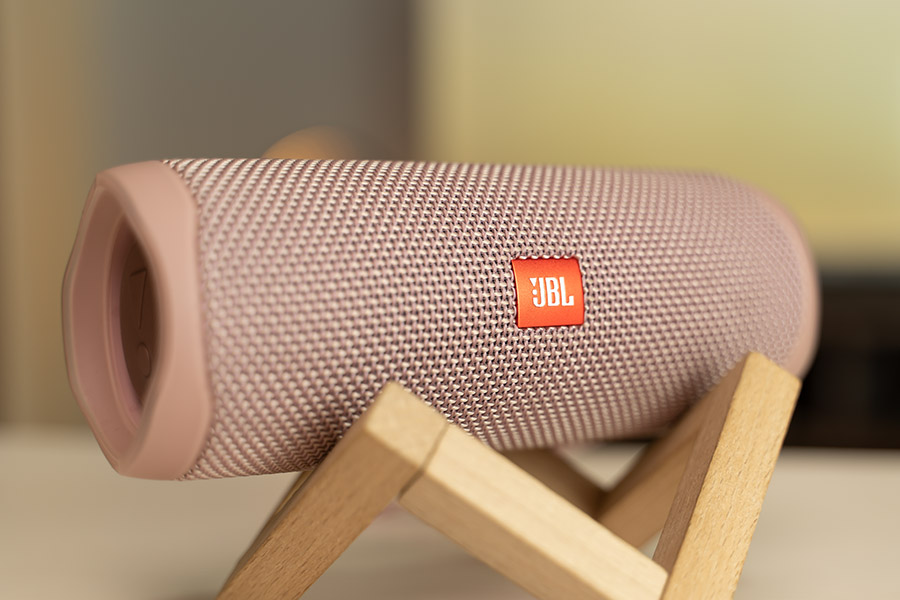 Full disclosure, if you don’t own any other JBL speakers, you can just skip this part. Because the ugly I’m talking about is JBL’s yet another “PartyBoost” protocol for connecting it with other speakers from the company.

Previous JBL Bluetooth speakers used to come with the “Connect+” pairing protocol using which you could connect up to 100 devices at a time. The Flip 4 featured Connect+ as well. But no… JBL had to come up with yet another protocol titled “PartyBoost” which has basically the same functionality as Connect+ but is only compatible with other speakers with PartyBoost.

Right off the bat, I didn’t know about this and tried pairing it with Flip 4. Then I noticed the different logo between the two and Googled to know what it was. As far as I can tell, the new JBL Pulse 4 comes with PartyBoost and maybe other upcoming speakers. So, if you were planning to have a sound system with your older JBL speaker(s) with the Flip 5 at the helm, the company’s probably like “Cry me a river!“. Maybe the future Flip 6 will have PartyBoost+, who knows?

The JBL Flip 5 is a terrific Bluetooth speaker with great audio performance, no doubt. With a bigger battery and a faster-charging speed than the predecessor, there are so many things to love. However, it is (or could be) equally bad in some other departments. The lack of a headphone jack and speakerphone is a bummer. Also, the non-backward compatible PartyBoost shouldn’t have existed, to begin with. Therefore, if you’re in the market of a standalone decent Bluetooth speaker, JBL Flip 5 is an excellent choice. However, for people with older-gen JBL speakers looking for a connected sound system, I would suggest they skip the Flip 5.