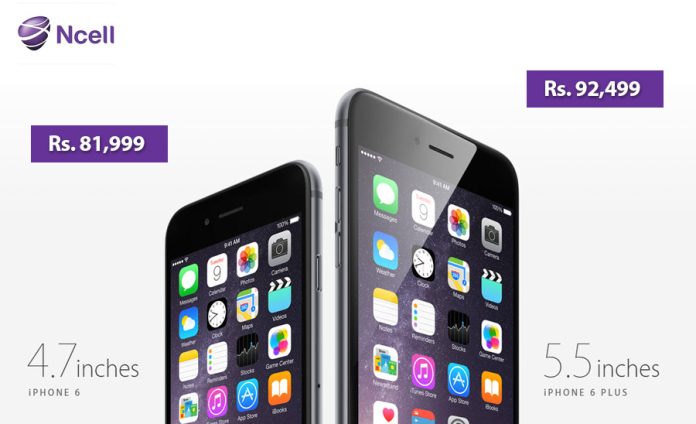 Ncell, the leading telecom providers in Nepal have been bringing new products and services to the Nepalese market that, well, has a decent price. Similar approach can be seen with its newly announced Ncell iPhone plan.

Ncell iPhone plan is aimed at bringing the newest iterations of iPhone in the Nepalese market at a decent price. It primarily contains the iPhone 6 and iPhone 6 plus with an addition of the iPhone 5S. Both the iPhones are Apple’s newest devices that aim to cater the audience which have a thing for larger screen devices. And quite frankly, iPhones needed a facelift.

Ncell iPhone plan, simply put, launches the iPhones (if not officially) just like they did with the nexus line-up. It consists of three plans namely:

iPhone 6 plus is the large screen flagship from iPhone. At 5.5 inches it stands tall among its competitors. With features like OIS camera and a 64-bit A8 chip with M8 co-processor. iPhone 6 Price in Nepal for the 16GB model is NRs. 92,499, whereas iPhone 6 Price in Nepal for 64GB version is NRs.92,499. Booking starts from Rs. 12,000 and each iPhone 6 plus comes with 1GB data every month for 6 months by Ncell. Other details are as below: iPhone 6 is a flagship phone from iPhone at 4.7 inches. It resembles to iPhone 6 plus in all ways except for a small screen size a non-OIS camera and of course, a smaller battery! Ncell plans to launch iPhone 6 in Nepal at a price starting at NRs. 81,999 for the 16 GB variant. Booking starts from Rs. 10,000 and each iPhone 6 comes with 1GB data every month for 6 months by Ncell. Other details are as below: iPhone 5S is an older iPhone model that was launched last year. It shared its design with the iPhone 5S with revamped performance. All these iPhones share a similar 8 megapixels of camera with iPhone 6 plus having a better edge than the other models. It has an A7 processor with M7 co-processor on the performance side. Ncell plans to launch iPhone 5S in Nepal at a price starting at NRs. 67,199 for the 16 GB variant. Booking starts from Rs. 8,000 and each iPhone 5S comes with 300MB data every month for 6 months by Ncell. Other details are as below: Well, it depends on various things, like Price. On the price point this seems a sweet deal since the Grey market has these phones at a higher price point. For an instance iPhone 6 Plus in Nepal is available at Rs. 1,05,000/- Comparing it with the Ncell iPhone plan, the deal looks good even without considering 1GB/month package. Other considerable point is the after-sales. Ncell has provided no clue as to how will they service their iPhone customers on repairing side. Maybe they’ll handle the repairs from their own service centers which seems quite farfetched. If Ncell has no plans for after-sales support this deal might be a bummer to some.

All in all its an Okay deal and iPhone lovers can infact benefit from this deal. I guess that’s that for now. Let us know if you opt for Ncell iPhone plan in the comments below. Cheers!