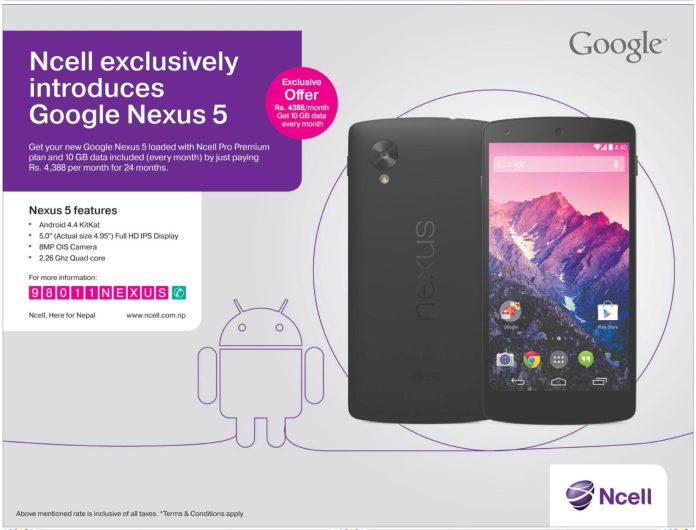 Ncell has introduced Nexus 5 in the Nepalese Market today and has priced it at Rs. 4388. Is it worth buying? Is it not? Find it all here about the Ncell Nexus 5 plan as i take you through the plans’ innards.

Ncell has introduced Nexus 5 (quite late, i’d say) in the Nepalese market. Yes, this is the Google Nexus 5 and they have priced it at Rs. 4388/month (quite expensive, isn’t it? Well, you might want to hold your thoughts!).

HOW MUCH DOES IT COST?

WHAT! WHY SO MUCH?

I know that’s the question running in your minds right now! So let’s make it easier for you. Ncell are not charging this amount just for the phone. They are giving away some benefits alongwith the Ncell Nexus 5 plan. Think of it as a plan, a contract phone like in the U.S. If you buy Nexus 5 now in the U.S. at contract, you’ll have to pay at least $40-$50 per month for two years. Doing the math, that’s no more than Rs. 4388 that Ncell’s plan costs. And since, Gadget freaks have always wanted a contract phone in Nepal too, Well, here it is.

HMM…A CONTRACT PHONE. SO, WHAT DO I GET?

There are quite some benefits if you buy an Ncell Nexus 5 plan. Lets list them:

SHOULD I BUY THIS, THEN?

Well, all i can give is choices. The Ncell Nexus 5 plan seems overly priced, yes it does! But if we grab our calculators and really see what’s inside, we’re actually gaining! But i won’t say this is for everybody!

This is for those, who are an active user of mobile internet. Likewise, the current users of Pro Premium plan might also opt for this plan. This is NOT for those users who sometimes use their 3G data to browse and are not much fascinated about the Ncell plans. So, choose your sides before getting the Ncell Nexus 5 plan. Afterall Nexus 5 is a great phone! 😉

Anyways, Kudos to Ncell, from my personal side for at least starting a Contract-phone (well, almost) in Nepal at a price offered abroad. Had Ncell been able to reduce the cost to 2,500 or even 3,000 to make it suitable for country, This would have been a MEGA-HIT!

What do you think? Will you buy? Let us know in the comments below.