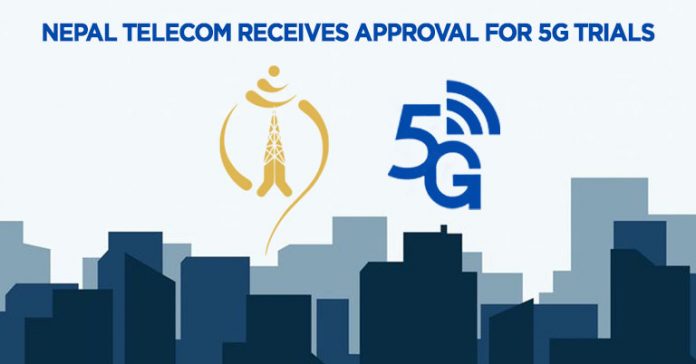 Nepal Telecom (NTC) is in the 5G hustle for a long time now. The state-owned telco secured the spectrum for 5G back in November 2021. And after a long wait, NTC planned to begin 5G trials in the country on January 1, 2023. However, things did not go as planned, and the company has now postponed the 5G trial. Let’s learn more about Nepal Telecom’s plans and preparation for the 5G tests in Nepal.

Back in June 2021, Nepal Telecom (NTC) submitted a work plan to the Nepal Telecommunications Authority (NTA) to start 5G trials in the country. The company had prioritized the 2600MHz spectrum and was awaiting approval from the governing body.

The board meeting of NTA then decided to provide 60Mhz frequency bandwidth to NT in its preferred 2600MHz band. This decision was made based on the working procedure for 5G trials that NTA published back in July.

After approval of work plans from NTA, Nepal Telecom imported and installed the hardware required for 5G trials. Although the process of equipment delivery and deployment took longer than expected, we now know that it is in place. According to NTC’s spokesperson Shobhan Adhikari, the 5G equipment has been installed in four locations across the country following approval from the NTA.

Trials to start in all 7 provinces

Since NTC has the necessary spectrum and infrastructure, the company is preparing to start 5G trials in four provinces in Nepal. The Ministry of Communication, Information, and Technology (MoCIT) has, however, directed the telecom operator to conduct trials in all seven provinces. As a result, the telco operator will most likely install the necessary hardware in certain locations throughout the other three provinces as well.

When asked when the trial would begin, Adhikari stated, “it will begin right after Tihar concludes.” “After Kathmandu, tests will begin in all seven provinces, in one location each, in the current fiscal year 079/80,” he added.

However, the telecom was unable to begin the 5G trial after Tihar due to the general election of November 21. The date was then pushed further to January 1, 2023. But, NTC was still unable to begin the trial on the occasion of the new year, citing there were not enough mobile phones supporting 5G at 2600 MHz frequency.

NTC spokesperson Shobhan Adhikari says, “We found that only a small number of mobile sets operate 5G in 2600 MHz frequency in the local market.” He added, “Firstly, we will try to identify the number of mobile sets and other devices supporting 5G in the frequency allocated and move ahead with the trial.” Now, it’s expected that it might take 2-3 weeks more for NTC to start the trial.

These trials will be conducted on Non-Standalone (NSA) architecture, which means that the 5G network will be built on top of an existing layer of 4G. Rather than building a costly 5G core, testing it using NSA architecture lowers overall costs. Nepal Telecom, on the other hand, intends to test Standalone architecture (SA) with dedicated 5G core infrastructure at a later date.

The way ahead for Nepal Telecom

Nepal Telecom will need to submit progress reports to NTA every three months. Failure in reporting any progress in infrastructure development in the said time frame could result in the revocation of the 5G license.

If Nepal Telecom adheres to all the requirements, it will have access to the 2600MHz band for free for a year. The telco won’t be allowed to charge users for 5G for this time though. After the trial period is over, the allocated spectrum needs to be returned to NTA. Similarly, the networking equipment used during the test can be utilized for the existing 4G network.

As of now, NT cannot test 5G in 800MHz or any other band that it already has. However, it will have to coordinate with NTA if it wants to do so.

On the other hand, no decision has been made on Ncell‘s request for 5G trials. The private telecom operator is also keen on operating 5G in the country but is yet to receive any kind of approval despite filing for trials months ago.