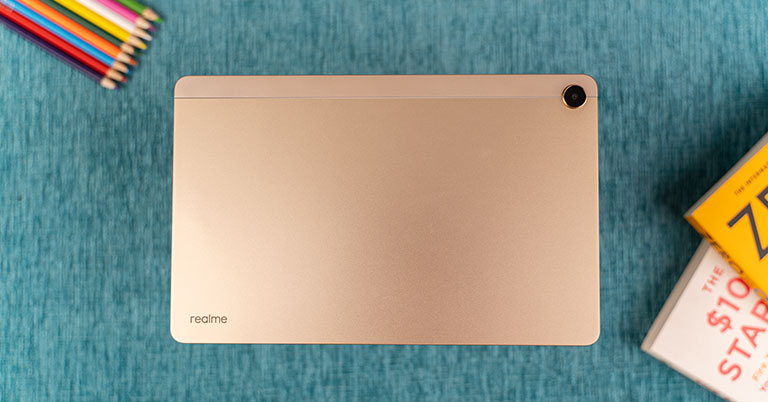 If you remember, we recently came up with a list of the best budget tablets you can buy this year. Still, to be completely honest with you guys, our choices fall short in one way or another. However, the new Realme Pad that I have with me looks like an all-around bundle in the budget category. The company has also recently entered the laptop market with the Realme Book Slim, which we felt to be an excellent bargain given its features. So, does the Realme Pad genuinely fill the need left by other manufacturers? Let’s find out in this review.

Now, let’s get started with what I loved most about this tablet. At first glance, it’s unquestionably the build quality and design. This is not only the first tablet under the Realme branding but also the first under the BBK umbrella. Thus, Realme has to deliver it perfectly and hit the sweet spot with its design. So, despite being a budget offering, Realme Pad flaunts an aluminum unibody with squared-off edges which feel sturdy and strong. Also, the brushed design on the back doesn’t attract fingerprints or smudges—while its weight distribution is equally balanced as well.

Ok, that reminds me how thin and lightweight this tablet is. It measures just 6.9mm and weighs only 450 grams. As a result, holding it with one hand while reading through my Facebook feeds or during my online meetings has been no problem.

Moreover, it is available in two color options, namely Real Gold and Real Grey. Yet, my favorite is the Real Gold which I feel is tuned to match my taste. There’s also a camera housed on the rear and a narrow line that runs from edge to edge. Also, if you look closely, the line separates the two tones on the rear. I’m not sure why there’s a separate tone on such a little section, but it doesn’t detract from its premiumness. 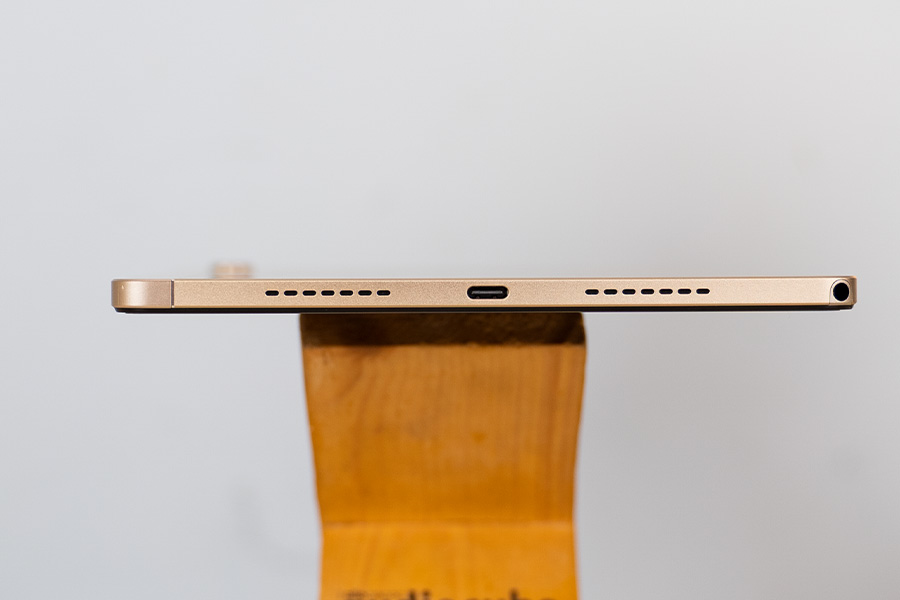 In terms of the buttons, they are all located on the edge of the device and have a decent tectile feedback. On the right, there’s a volume rocker and a hybrid SIM card tray, whereas you’ll find the power button on the top. The headphone jack is interestingly placed on the rounded corners on the left.

Now, hitting that power button will greet you with a 10.4-inch IPS LCD screen. It’s a WUXGA+ (2000 x 1200) resolution panel with a 15:9 aspect ratio. Although Realme’s officials teased its first tablet with an AMOLED display, the firm has narrowed it down for the IPS. Nonetheless, the display has a good color balance and I didn’t have to sacrifice the viewing angle either. However, what I really want to emphasize here is that it would have been much better if Realme had included a screen protector in the box. With the device of this tall and wide aspect, there are chances of inadvertent dropping.

On a more positive note, the screen is plenty bright at 360 nits and Realme also claims that it can go as low as 2 nits when used in Night mode. In my experience, the panel can actually get dimmer than what I am used to seeing on my smartphones.

While we are short of measuring the actual nits, GSMArena’s test results showed that it can reach a minimum brightness of 1.7 nits. Furthermore, the maximum brightness was recorded up to 455 nits, which is undoubtedly a bonus. Yet, the peak brightness is only suitable for indoor use.

One thing I’ve noticed here is the display is relatively on a cooler side and the new Realme Pad OS doesn’t let you calibrate it according to your taste. So, I hope Realme brings a feature to play with the color settings with the next OTA update! Furthermore, as expected from a budget tablet, it misses HDR and DCI-P3 certification; but, it does have Widevine L1 certification, which means you can enjoy Full HD content on OTT platforms.

Moving on, another aspect where Realme Tab stood out from its competitors is its performance. Hmm…you could ask how? But the best budget tablet on our lists hasn’t impressed us in terms of performance. We ranked the Lenovo Tab M10 HD (costs similar to Realme Pad) the best on the budget, but stutters greet you every then and now. 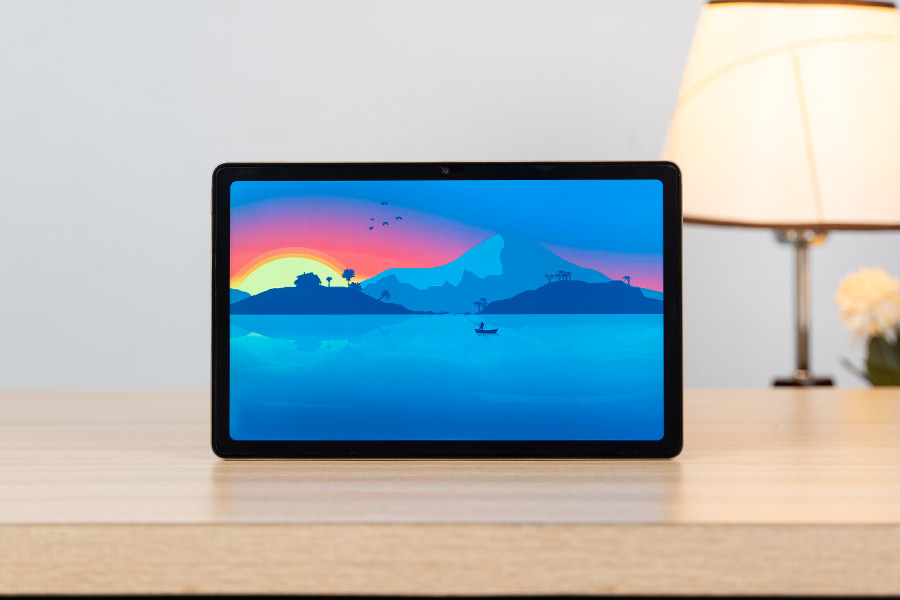 It’s because the Lenovo tab sports a quad-core Snapdragon 429 chipset, while the Realme Pad has a much better octa-core MediaTek Helio G80 chipset. But, that doesn’t even mean you are getting a buttery smooth experience.

You will undoubtedly notice the hint of jelly scrolling effect, but for this price, I can’t complain either. The RAM management is good too, as it can easily store up to 5 apps in its memory. However, there’s a tad bit of app load time while opening the app or switching from one app to another. By the way, if you’re wondering, the variant I have with me is the 4GB RAM with 64GB of storage.

I even tried gaming on the tablet, and it’s safe to say that this tablet is suitable for light amusements. Here, PUBG Mobile is playable at HD graphics and a High frame rate, although Smooth and Ultra are better options to go with. Similarly, Call of Duty: Mobile can be played with the graphics set to Medium.

Let’s also talk about the new Realme Pad UI. The tablet boots on Android 11 based Realme UI for Pad. The sigh of relief is that it doesn’t come with any bloatware out-of-the-box. It has only a few Google apps pre-installed in it and offers a near-stock experience. However, it does have limitations of its own—like there aren’t many customizations options or additional features you can play with. 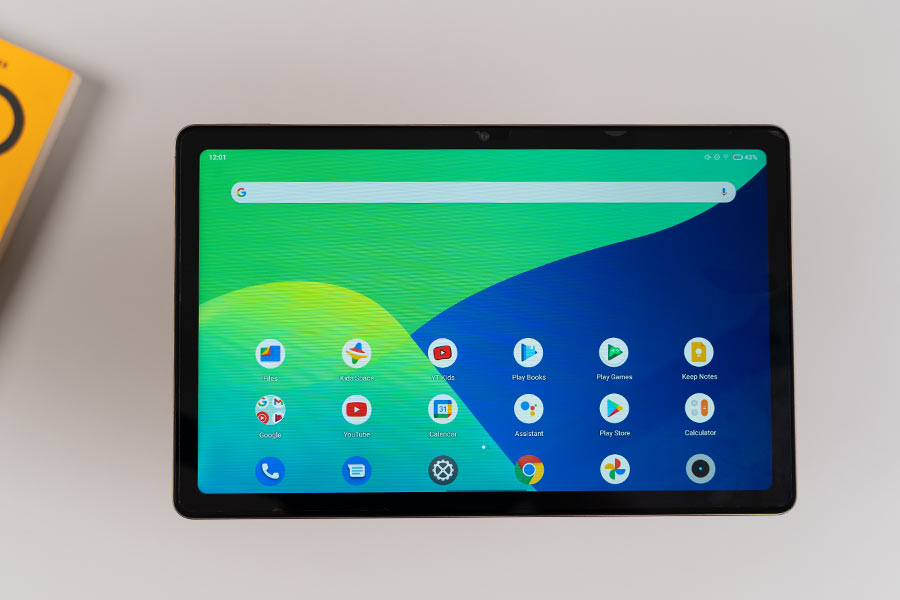 Some prominent features missing from the Realme smartphones are a dedicated Game Center, Sidebar, and advanced dark mode. Thankfully, split-screen is possible here and it works smoothly with most apps I use regularly.

Moreover, the Android tablets did not make the same strides as the iPad. To Android, tablets are big chunky phones. It just scales the app to fit the large screen real estate, but Apple’s iPad OS offers a tablet-optimized experience. So, there are tons of possibilities where Realme UI for Pad can get better in its forthcoming iteration.

Getting to the battery, the Realme Pad is backed by a large 7100mAh cell that easily lasted nearly two days on my rigorous testing. That’s enough energy to go you through a full cross-country flight without needing to grab a charging cord or battery pack. Similarly, if you use it less often, you can easily expect 5-6 days of use.

The major caveat here, though, is its 18W charger, which takes around 2 hours and 45 minutes to completely charge the cell. While it’s not the slowest we’ve seen on a tablet, fast charging up to 30W would’ve been ideal.

Furthermore, the new Realme Pad makes no concessions when it comes to audio. It includes a quad-speaker setup that supports Dolby Atmos and Hi-Res Audio. And, believe me, the audio can grow loud enough to fill a medium-sized room. It offers a nice stereo effect, and the lows can get enough boomy to satisfy your bassheads. But, at the volume bar set to maximum, I did notice sound distortions.

While all of the aforementioned specs attempt to fill the void left by budget tablet manufacturers, the camera is where it falls short.

In well-lit circumstances, the rear 8MP camera takes decent photos. The pictures are free of noise and have good contrast. However, it has difficulty maintaining sun or sky exposure.

What’s nice about this tablet is that it doesn’t oversaturate the greens, as other Realme phones do.

The front 8MP lens, as with most tablets, is located at the center of the right bezel. Thus, you should place the tablet in landscape mode for taking selfies.

The image from the front camera appears natural; nevertheless, suffers majorly from exposure maintenance. Still, the image has a decent contrast to it.

Furthermore, it is adequate for casual meetings or group chats with pals. Also, the device utilizes the front camera for face unlock, which I found to be pretty accurate and fast.

Wrapping up this review, the Realme Pad can differentiate itself from other white boxes available in the market—either in terms of better software, cameras, or performance. But, then again, there is no doubt that Realme has hit the nail on the head with its first tablet, especially considering its affordability.

Also, I’m hopeful that the company would debut with a competitive tablet to beat the likes of the Xiaomi Mi Pad 5 or the Samsung Galaxy Tab S7 FE. As of now, for Realme Pad, I would go so far as to rank it as one of the best go-to budget tablets in 2021.