In this review, I’ll be discussing the Realme Watch 2 at length. Last year, Realme launched its very first smartwatch, dubbed the “Realme Watch”. And it was not well received, to say the least. The company then went on to launch a few smartwatches with moderate success, before coming up with the Realme Watch 2 a couple of months ago.

On paper, this looks like a decent upgrade over its predecessor, but just how much of that pans out in terms of real-life usage is the real question. Plus, with fitness trackers like Honor Band 6 and Mi Band 6 pushing the envelope for health tracking on a budget, should you really be considering budget smartwatches like this? Let’s find out in this review of the Realme Watch 2.

So, let’s start with the display. While its 1.4-inch screen sounds untouched coming from the first-gen Realme Watch, the company has brought noticeable changes to the panel. The first thing you will notice is the symmetrical bezels on the top and bottom. Additionally, the screen is brighter and more vibrant, too. It also feels relatively more fluid and responsive.

That being said, there is still no automatic brightness adjustment onboard, while the flip-to-wake function is quite inconsistent.

Furthermore, the screen isn’t AMOLED either, meaning you’ll miss out on Always-on Display here. As a result, I found myself relying heavily on the screen wake-up button. This wouldn’t have been a problem at all, had Realme not cheaped out on such an essential component. The tactile feedback of this button is even worse than the one on Realme Watch as it feels more plasticky and squeaky when pressed.

Anyway, you get plenty of watch faces to choose from on Watch 2, including the one Realme made in collaboration with the South Korean artist “Grafflex”. A total of 6 watch faces come pre-loaded, including some live wallpapers. And you can replace them with a variety of other options from the Realme Link app.

In case you haven’t noticed, the “Realme” branding from the chin is gone this time. Instead, there is the company’s “Dare to Leap” slogan slapped onto the wrist strap. The branding is subtle and not that noticeable when putting on the smartwatch—which begs the question: why even bother to put it in the first place?

Compared to the 20mm strap on its predecessor, I found the wider 22mm strap on the Watch 2 to be more comfortable. I also like the fact that it’s a traditional loop-buckle strap, which feels more convenient to me than the Apple Watch-inspired strap on the first-gen Realme Watch.

Getting to the UI, for the most part, it’s remained the same as last year. Swiping from the left brings the status bar, which now features a quick shortcut to settings.

That’s because the company has enlarged UI elements like fonts and icons this time around. While the latter has been optimized for a streamlined view on the app list, the same design practice is absent in terms of notifications. Plus, these non-actionable notifications lack emoji support as well.

Additionally, you will find quick tiles for activity, heart rate, weather, and music control on the right. Except for the last one, these tiles aren’t interactive (or customizable). As a result, you will have to open the desired app from the app list on the bottom for further detail.

Here, you can access all of the watch features, including SpO2 monitoring, camera control, and a bunch of basic functionalities like alarm, stopwatch, etc.

Moving on, the Realme Watch 2 pairs with your smartphone via the Realme Link app—just like any other smart AIoT product from the company. What’s commendable here is that the app is now available for iOS users too. Though Realme Link’s iOS version was made available last year, it still doesn’t let you connect the original Realme Watch to iPhones to this day.

Another highlight here is that the Realme Link app has been integrated into the watch itself. With this, you can control other Realme AIoT products connected to your phone. I tested this feature with my Buds Air 2 Neo and Buds Wireless 2 and found it to be quite useful.

I could toggle between ANC/Transparency mode and gaming mode on them without having to reach out to my phone or the wireless earbuds themselves. However, if you don’t own any other Realme AIoT product, this feature won’t amount to much. Let us now move on to the health and fitness tracking side of things. Under this, the Realme Watch 2 offers everything you would want from a budget smartwatch. For starters, it features an optical heart sensor for 24-hour heart monitoring. And just like on last year’s model, the watch can be configured to check your heart rate every 5 minutes.

Still and all, I simply don’t understand why Realme decided to get rid of REM (Rapid Eye Movement) sleep tracking on Watch 2. Not adding a feature is one thing, but removing something present on the previous iteration feels unreasonably weird.

I also found that the first-gen Realme Watch was more capable of accurately recording my time to bed, the time I got up, and my other sleep metrics like the time I would be awake in the middle of my sleep sometimes. Also, there’s no tile for sleep data which is kinda frustrating.

Nevertheless, the 90 sport modes present on the Realme Watch 2 is a big improvement over its predecessor. Yet, the watch can only store 10 of them at once. Basic workouts like an indoor and outdoor run are irremovable but you can replace the other 8 with the remaining 80 modes via the Realme Link app. 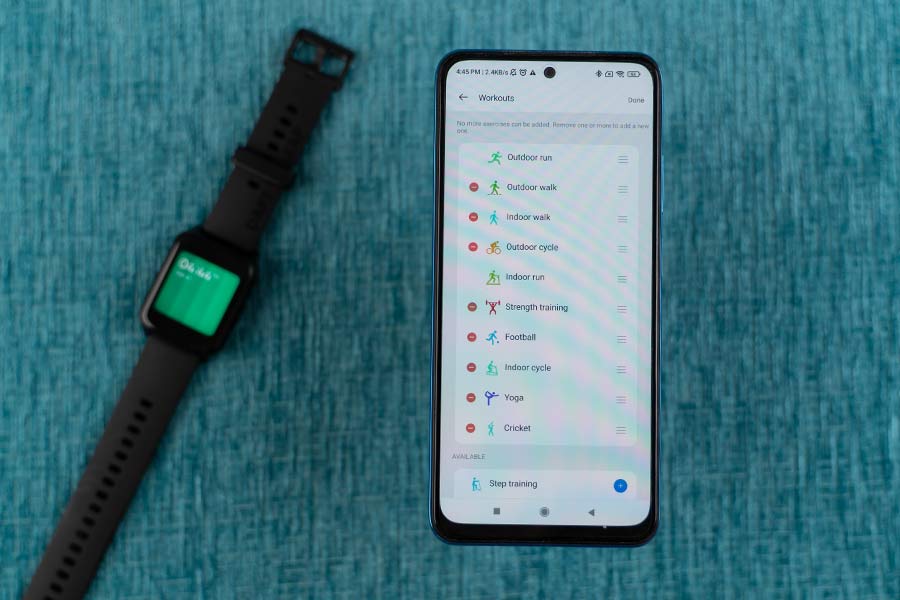 That being said, most of the sports modes record the same metrics like steps, heartbeat, and duration with some difference here and there. Compared to the Realme Watch, I noticed that it graphed my workout data fairly better in terms of the pace and cadence—while being neck-and-neck in terms of metrics like steps, distance, and heart rate.

In addition, Realme Watch 2 can’t even track pool swimming despite its IP68 dust-and-water resistance, while the company says the watch is not suitable to wear during showers either. Additional 5ATM certification would’ve been even more ideal for things like deep dive swimming but this ultimately feels like yet another inexcusable omission.

With that out of the way, all the data from the watch is synced to your Realme account. You can view some of them on the watch itself but obviously, you’ll have to refer to the companion app for deeper insights.

Even though viewing your workout data on the watch is quite easy thanks to color-coded metrics, I had to refer to the app for more details. Weirdly enough, things like average speed and peak heart rate are only viewable on the watch.

In terms of battery endurance, the Realme Watch 2 has been pretty great. I was able to get over a week (~ 9 days) of battery life from this smartwatch on a full charge. During my usage, I set its brightness to 60%, tuned all-day heart rate monitoring to every 5 minutes, and tracked about two hours of workout every day.

All in all, I have mixed feelings about the Realme Watch 2. It is a clear upgrade from the Realme Watch although it was not a good product, to begin with. While I had fun using the watch, neither of its features stands out in particular. In addition, the Watch 2 misses out on features like an AMOLED panel, REM sleep tracking, 5ATM rating, and swim tracking that have become standard across mainstream fitness bands these days.