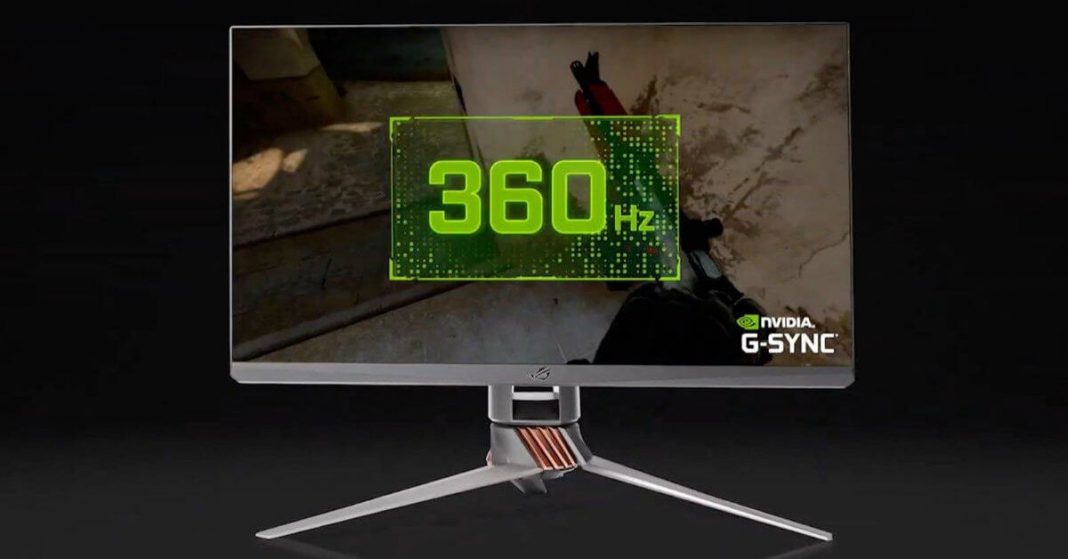 It’s been quite a while that nothing significant has changed in the monitor segment. However, that’s all set to change. Ahead of this year’s Consumer Electronics Show (CES), NVIDIA and ASUS made their big announcement that is the ROG Swift 360.

The two technology giants have been working together to bring forth a new crop of monitors. This new addition has a 1080p resolution and an astounding 360Hz maximum refresh rate. It is a very high-performance monitor aimed at competitive gaming. The companies claim that this monitor is in fact 50% faster than currently available 240Hz monitors.

Currently, the high-end gaming monitors max out at 240Hz. However, this new G-Sync project is certainly going to be a game-changer. It provides a previously unprecedented upgrade of 120Hz in a single generation. The ROG Swift 360 has a 24.5-inch panel that is supplied by AU Optronics. Still, we have no information yet about the type of panel in this one. Previously, most of them have had a TN panel. Thus, it maybe safe to assume that this too will have a TN panel.

However, this monitor will not be ready for sale until the latter half of this year. Therefore, ASUS and NVIDIA have not yet shelled out the technical details. With several months until the release, it is probable that there might still be some technical issues that remain to be fine-tuned. Still, the rumor that’s making the rounds on the internet is that the device is probably similar to the 240Hz ROG Swift PG258Q.

With NVIDIA being one of the two companies that is involved in this project, the company has promised that the ROG Swift 360 is going to be a true G-Sync monitor. This implies that the monitor supports complete variable overdrive functionality. This is especially important given that the monitor has such a wide range of refresh rates.

The practicality of the 360Hz monitor is still seen as an issue by many. And with the aim to outshine the current high-end monitors by 50%, this new monitor will have to be really fast. And that is necessary to make the 360Hz refresh rate useful too.

It goes without saying that this monitor is aimed at competitive gaming. Higher refresh rate equals smooth user experience and less rendering latency. However, the current 240Hz monitors already offer 4.16ms frame time. Thus, the added benefit of a 360Hz monitor might just be very tiny to even notice. Still, NVIDIA believes that there are enough benefits to justify a 360Hz monitor.

The monitor is on display at CES 2020. So, even if there’s still a lot of time left for the actual release and its price, enthusiasts will be able to see first-hand the future of gaming monitors at this year’s CES.