Not many days since 2018 has started and Samsung is all set to launch two mobile phones in the galaxy series i.e. Galaxy A8 and A8 plus. The phones are expected to release in the third week of January. Smartphones of the A-series are always premium but compromise on the performance front. Over the years, they have always featured some top of the line specifications all while compromising with the performance.

With not many days before the launch, let’s get into the what and why’s of the phones. As the model of the phones themselves signify, these phones are similar to a great extent but with slightest of dissimilarities.

The glass front and back with aluminum body makes it a trendy phone as glass is being preferred these days. On the weight department, the A8 and A8 Plus have 172 and 191 grams of weight respectively. The A8 Plus has a taller screen i.e. 6 inches for the people who like big screens. The phones are IP68 certified which means these are dust and water resistant for 30 minutes and 1.5 meters which is an advancement.

Starting with the display, the phones have Super AMOLED display which means sharper blacks and saving of battery to a great extent which, we can barely find in phones like this as of 2017. As per the size of the screen is concerned, the phones have 18.5:9 ratio which is really good. On top of that, the phones have Corning Gorilla Glass which is again great to have on a phone. 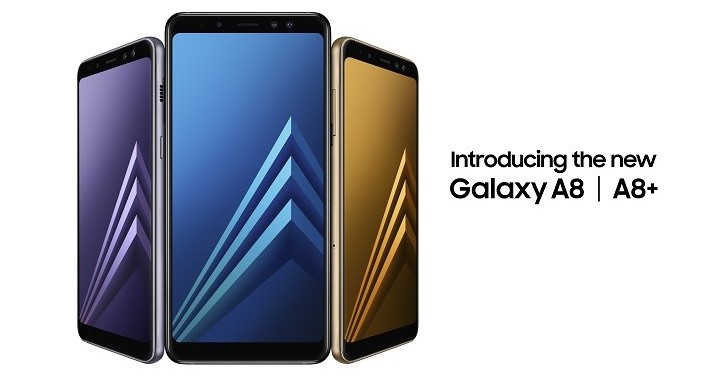 The phones run on Android 7.1.1 Nougat version which is comparatively not as impressive as Oreo version of Android is already available. These have Octa-core Exynos 7885 which is Samsung’s own development alongside Mali G71 GPU. Faster and smoother performance can be expected with 8 cores on work. These also have a dedicated slot for micro SD card of up to 256 GB.

We don’t find as much of difference in the camera department as well. With 3 cameras on each, we can find 1 rear camera with 16 MP and two front cameras with 16 and 8 MP each. The aperture is also the same as the rear camera has f/1.7 and the front-facing cameras have f/1.9. With full HD quality video with 30fps, the videos will have good quality along with smooth video experience. Touch focus, face detection, panorama and HDR functions add extra oomph to the photo taking experiences.

The Samsung Galaxy A8 and A8 Plus (2018) support 3.5 mm headphone jack with a single speaker that makes it loud but probably not loud enough. Type C 1.0 reversible connector makes the charging experience faster and convenient. Radio FM option is also available for the ones who need some infotainment with all their concentration to work. The one thing that these phones have better is the rear-mounted fingerprint scanner which is below the camera rather than beside the camera which keeps the camera free from fingerprints. The Li-ion 3500 mAh battery provides the phone with a longer battery.

The phones are available in black, orchid grey, blue and gold. According to rumors, the A8 could be priced approximately Rs. 56,000 while the A8 Plus might run you Rs. 64,000. With the mentioned details both the phones look pretty promising. One of the things which I found the downside is the size of the phones as both are bigger phones that can’t be easily carried in pockets. Had one of these been smaller in size, they would be more convenient.