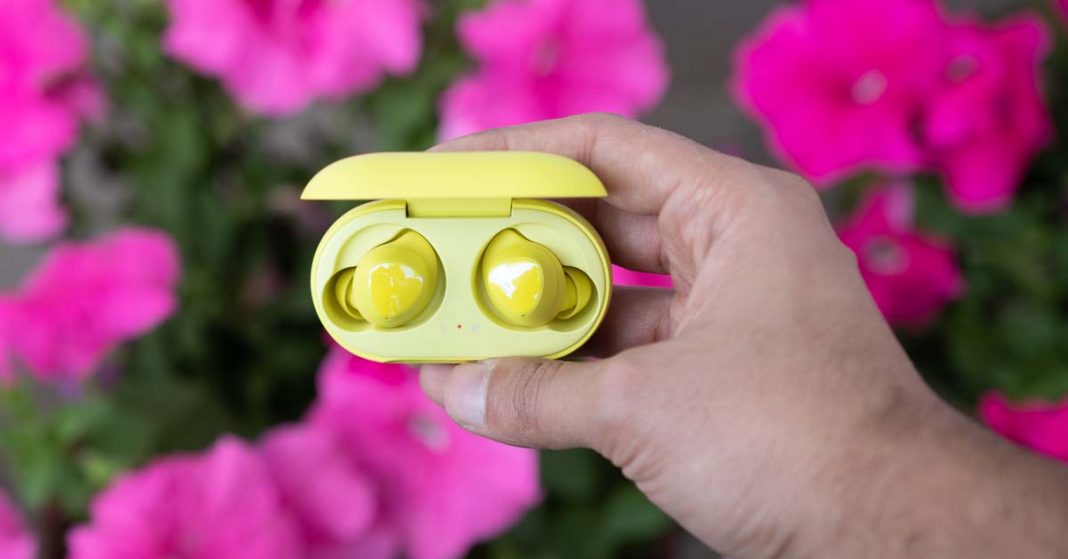 So, what do you do when your competitor excels in something you haven’t ever tried? Well, you definitely try to do the same thing, trying to better those competitors. And this device I have here with me is the example of that. This is the Samsung Galaxy Buds, and it is Samsung’s answer to the Apple Airpods.

Airpods have been around for a while, and they are quite popular. I have seen a lot of people just roaming around rocking their Airpods. So, yeah, wireless buds are getting really popular and it was about time Samsung got into the act. So, I was really excited to use it, and thanks to Samsung’s offer, I got the Buds for free when I pre-ordered the Galaxy S10. 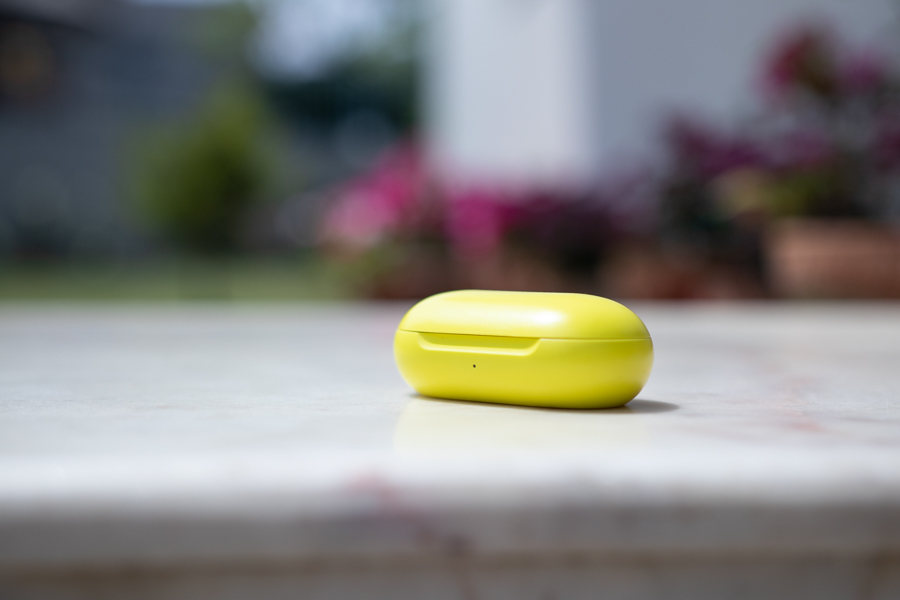 When I held the buds for the first time, I liked the heft it had. Even with the small design, its case is well-built and even if you drop them, they will handle that with ease. The case has a magnetic lid that snaps right on the base, and I really like the clickiness it has.

The buds are stored safely inside it and they are magnetically connected to the case giving you some protection. They are quite small and light, but again, just like the case it comes with, it is quality. Samsung has put a lot of effort into it, and the feel, the build quality, everything is great. It is a product from Samsung after all.

Along with the box, you also get differently sized wingtips and eartips in the package which really help with the usability. I got to choose the right fitting for my ear and that’s also one of the features that differentiates the Galaxy Buds and Apple Airpods. If you get the Airpods, you are fixed to one and only one size, but the story is different with the Galaxy buds. You can get comfortable just the way you like. Now let’s talk about the major purpose of any headset, the sound. Before I tried it with the Galaxy S10, I connected the buds to a non-Samsung smartphone. The sound was only average, though, and the bass was too weak. Thinking this was the case with phones other than the Samsung one, I ran it on the Galaxy S10. And the case was the same.

But with the Galaxy Wearable app, the buds do get a little better. Especially enabling the bass boost option, the overall sound quality does get better. There are also other sound options, but I always opt for the bass boost as it turns the below par bass to make it more amplified and better.

However, the bass of the Buds doesn’t define the pricing of the headset. The Sony earphone that I got for $30 definitely overpower the Galaxy Buds’ bass. If you really want the best of the bass, you can turn up the volume to the maximum, but I definitely suggest against it. 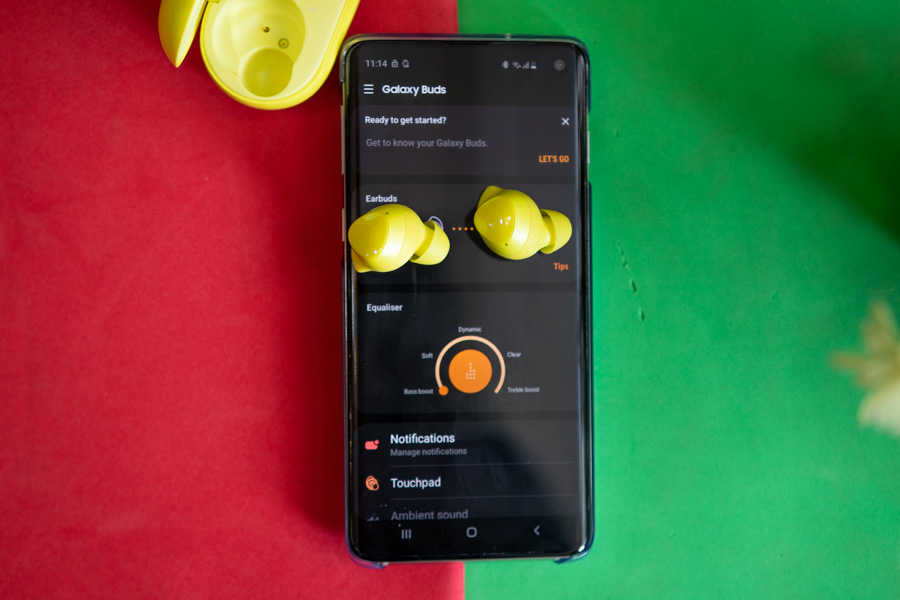 The sound, otherwise, is good. It has ample clarity, and the treble really pops. There is a treble boost option too if you want to get the best out of the high notes. And if you want balanced audio, go for the dynamic option.

However, the sound quality doesn’t define the price for me. It’s loud and all, but you will be missing that final punch, that one final punch that makes the audio sound the best. There is noise cancellation on the device which is one of its best parts, but like Becca Farsace of the Verge said, “There’s no mistaking that the sound is coming from a very small source and being shoved directly into your ears.” And that shoving is the major reason for the cancellation.

Although the people I called through the Galaxy buds haven’t really complained about the call quality, a lot of its users have had their share of issues. Apparently, in crowded places, the mic doesn’t receive users voice clearly. I haven’t faced that issue, though. For the smart side of Buds, Samsung has added touch sensitivity to its reflective side. The buds offer a few controls through touch. One tap plays or pauses audio, two taps play the next track or answer a call while three taps play the previous track. Samsung has offered a choice to remap the touch and hold button. I changed it to voice assistant, which here is the Google Assistant, not Bixby. A huge thumbs up for that!

But still, I would have liked to use the double tap for the voice assistant and swipe for changing volume. This would have been easier for users. I think Samsung can still change it with a software update.

Talking about software updates, I have already received a couple which is a great thing indeed. Another thing Samsung needs to better is the touch sensitivity. When I try to control the audio, the touches don’t register sometimes. And if I take off one of the buds, the audio doesn’t mute. These can be bettered with software updates, so I hope Samsung takes a look into it.

The other half-baked feature is the Ambient Sound mode. Samsung has included this feature so that the users can hear what’s happening outside their ears while rocking their Buds. The mic on the buds works like an actual mic to take in the sound and stream into the user’s ear. While this feature might sound good, it’s not. It doesn’t work if you’re listening to music, and when it does, it sounds like someone speaking from the worst quality mic. The buds offer a battery life of 5-6 hours and the case has an additional 7 hours of battery life. It takes about an hour and 30 minutes to charge up the whole thing with Samsung’s 15W fast charger.

Wireless is the future and the new Galaxy Buds prove that. They are smart and carry a huge potential in being one of the most sought out devices. Unlike Airpods, they can connect to any Android device and work tirelessly with the Galaxy Wearable app. It is sturdy, comfortable on the ear, and the sound quality is quite decent too. So, it must be the best right? Well, not really.

There are a few shortcomings on the device, and most of those shortcomings are what differentiates the headset from the best. Maybe this is because it’s Samsung’s first take on such technology, and maybe Samsung will come up with a better device next year. So, if you’re planning to get the Samsung Galaxy Buds, don’t. Wait for another year.