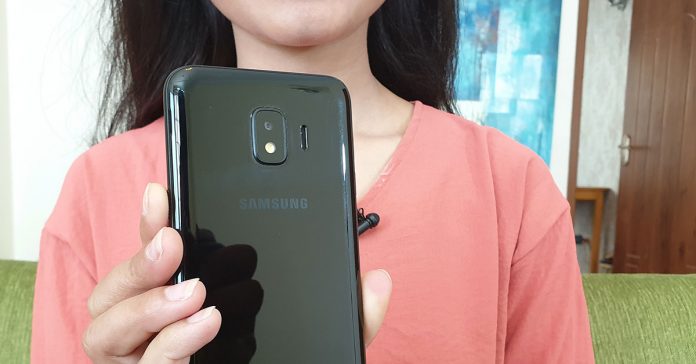 As you can guess, it’s a plastic build with minimal design choices. The back is comprised of a removable plastic slab with a cut out for the rear camera and the loudspeaker. Other than that you get the Samsung logo and nothing else. The back is a fingerprint and scratch magnet, although it feels very sturdy.

The volume controls are on the left and the power button on the right. The top is completely empty whereas the bottom gets the MicroUSB port, a mic, and an audio jack. The front is mostly the qHD display, front camera, and a call speaker. Even though it is a 16:9 display, Samsung has decided to skip on its famous home button and replace it with another Samsung logo. I don’t have an idea why, but if you do, let me know too…

This design focuses more on functionality and durability rather than aesthetics. It doesn’t feel premium but does give you a healthy boost of confidence as it fits perfectly in your hand. The smartphone is pretty durable, and can handle a few drops and in general some rough usage. 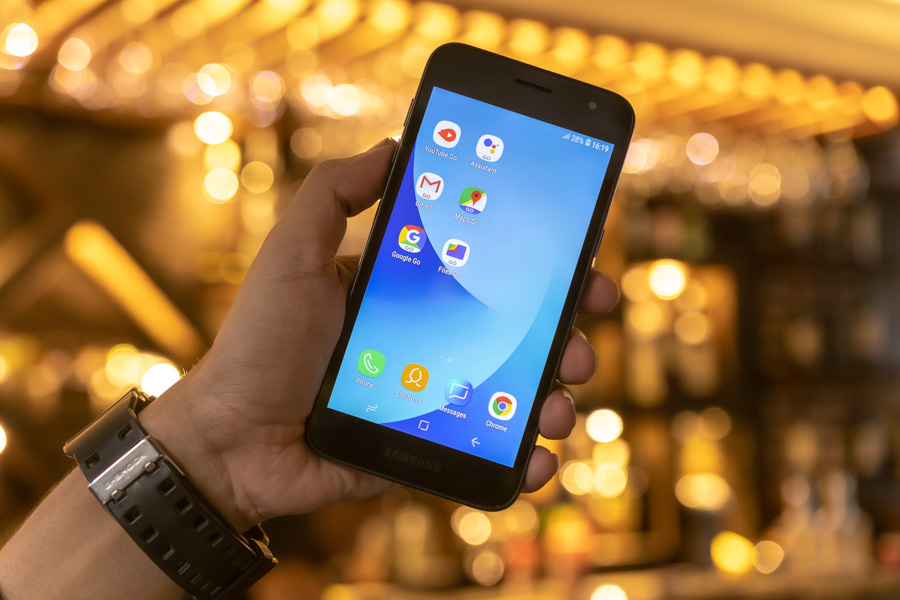 Samsung didn’t include their famous AMOLED technology this time around, thanks to which they managed to price it so low. Even though it’s a TFT display, it still manages to provide a really nice viewing experience. There is very less shift in color even under extreme angles and the brightness is also not half as bad as on some other devices.

An HD display at this price is a luxury which the J2 core doesn’t offer. The lack of resolution does affect your usage a bit, like while going through your Facebook timeline or just watching a YouTube video, but I have seen much worse. To be fair I have seen much better as well.

The cameras follow the same story as on previous J2 devices. They produce pretty nice photos under good lighting conditions but need very steady hands, to begin with. The rear 8 MP camera produced photos with a fine amount of details, ample vibrancy and overall usable photos for social media platforms.

The lowlight performance, however, is a different story, with grainy, blurry and pretty much some of the worst photos a phone can take. The flash helps a lot under low light situations, but nobody likes how a picture was taken with the help of a smartphone flash.

Finally, the 5 MP front camera puts out some really really decent selfies, some of the best I might have seen in its category. But you do need really steady hands for any type of decent results and more importantly, lowlight selfies are a No No. You also get a beauty mode but I recommend you stay away from that.

It’s a Quad-Core processor, with just 1GB of RAM but it wasn’t really a bad performer. Most of it was thanks to the optimized user experience, so I didn’t even bother with the benchmarks. It’s a toned down version of Android Oreo meant to run of smartphones with relatively lower specs and it does.

It was a totally different experience compared to when I used J2 devices in the past. Even games run pretty well. I didn’t try games like PUBG (what’s the point?) or Asphalt, but smaller and less-graphics intensive games like Clash Royal or Knife hit worked well. Apps open fast and not once did the smartphone freeze on me.

I would recommend you not leave apps in the background as it hogs memory and makes the smartphone unusable.

If you made it this far of this review, you already know that this smartphone works pretty well. The software is very optimized and useless functions have been removed completely. It is still Android Oreo Go edition with Samsung’s own customizations on top. If you have ever used a Samsung device in the past you will feel right at home. That is until you start opening apps and actually start using the device.

Most of the apps are stripped down less functional but more responsive and less resource hogging version of the apps. You can recognize these apps as they come with words like “Go” or “Lite” right in the name. For eg., the Maps Go, Youtube Go, Facebook Lite, Twitter Lite, Messenger Lite and such. You can find these apps in the Play Store itself and will work a lot better than their full versions.

You also get Samsung Max Go with it’s what Samsung likes to call “Ultra Apps”. Basically, it’s a VPN paired with a lightweight browser that enables users to load apps quicker. All it does is opens the mobile versions of a website but mimics an app and is said to save data.

On a happier note, this one should get the Android Pie update in the coming few months. It comes with a 2600mAh battery which is also removable, pair that with a 14nm processor and a qHD display, seems like a perfect recipe for great battery life. It’s not great, but you can go up to a day’s usage without any problems. I also didn’t experience any type of severe without reason battery draining problems.

The charging isn’t fast either, takes above 2 hours to fully charge from 0%. I never once had to charge it in the middle of the day or worry about the phone not lasting a full days usage as long as I threw it in the charger every night.

Storage wise, you only get a mere 8 GB which is expandable. The phone supports a maximum of 256GB memory card which should be adequate. On the plus side, the software allows you to move the apps to the SD card itself, which is a rare feature to have. All you have to do is go to “Settings” then “Apps and notifications” then select “All Apps”. Now select an app, there you will find “Storage”. Give it a light touch and there you will find a menu with “Storage Used” with a change option right beneath it. Select that and then select your desired location. Now, you might not find the change option, which could be due to two reasons.

You get the regular 2.4Ghz 802.11b/g/n Wi-Fi, Bluetooth 4.2 and an OTG support while sensors include an accelerometer, proximity and location. The speakers are fine, which was a real concern for me. Distortion is pretty less and loudness is also of no concern. It lacks a few sensors and features like a second mic, gyro sensor, compass or an NFC chip.

The smartphone does come with dual-SIM support but with a few compromises. For one it’s a MicroSIM, so your regular nano-SIM will be a little too small for the holder. The phone does support 4G but only on SIM 1; SIM 2 will be stuck at 2G connectivity.

The Samsung Galaxy J2 Core is a great smartphone, a solid try from Samsung. Although the specs could have been slightly better. An AMOLED display could have also made things a lot better but at this point, I am asking a bit more. It still performs really well, thanks to the optimized stripped down version of Android Oreo.

I might recommend this smartphone to first-time smartphone buyers who are coming from feature phones. But for anyone who is already using a smartphone, you can look elsewhere. The Xiaomi Redmi 6A could be a better option for Rs 12,999, which does deliver on a bigger and better display, improved performance, slightly better cameras and much more.

You might also try your luck with online stores. They are providing better value for your money. For instance, the Xperia L1 is currently on sale at Sasto deal for just Rs 12,000. That offers immensely better performance and a lot better design language. You can also get the Gionee S11 Lite for a huge discount of on Daraz as well which is also a better option than the Galaxy J2 Core.