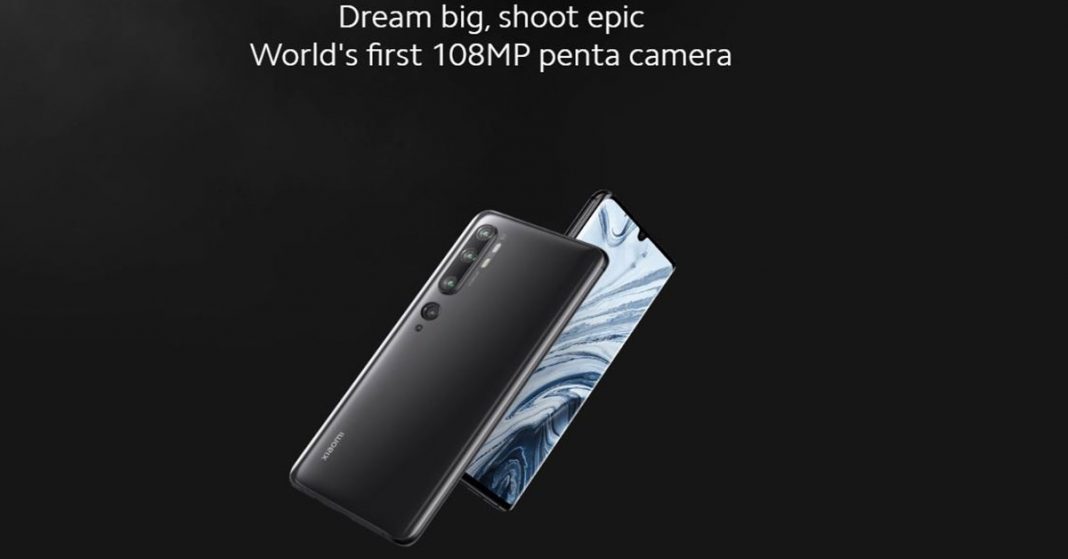 It had been coming for a while. Rumors were rife all over the internet. And now it’s finally official. Yes! the highly anticipated Mi CC9 Pro is finally official. The official statement also confirmed that the device will have five cameras on the back with the primary being a massive 108MP. The Mi CC9 Pro is also called the Mi Note 10 in Nepal. The good news is the Xiaomi Mi Note 10 could launch in Nepal as early as March.

The Mi Note 10 has a big 6.47-inch Super AMOLED panel with Full HD+ resolution. And an aspect ratio of 19.5:9. Furthermore, it has curved edges which means users will find it easier to hold the device despite its size. There’s also a waterdrop style notch upfront which houses the 32 MP selfie camera.

Moreover, the device runs on Snapdragon 730G. This is an octa-core CPU with two cores running at 2.2GHz. So, theoretically, there shouldn’t be any sloppiness in terms of performance.

The main highlight of this device, however, is undoubtedly its array of five cameras on the back. Not just five cameras, there are two pairs of LED flashes on the back too. The main 108MP lens uses the Samsung ISOCELL Bright HMX sensor. Furthermore, it has been announced that there will be an F/1.7 8P lens too. However, that’s limited to premium editions only. Nevertheless, it still makes the Mi Note 10 the first-ever smartphone to feature such a lens.

In addition to that, there’s a telephoto lens with OIS. It can provide 5x optical zoom which can reach 50x once it enters the digital mode. There’s also a 20 MP ultrawide lens with 117-degree FOV. The tiniest lens of the lot is a 2-10 cm macro lens. This along with the other cameras provide closeups of details from 1.5 cm distance. This is another feet altogether. That’s because it is the closest-ever distance achieved by a smartphone.

The five-camera array is completed by a portrait lens. Now, this too is not your everyday 2MP depth sensor. It can work as a 12MP telephoto lens with a 2x zoom. All these suggest that this camera setup gets you 50mm focal length which spells for a great perspective.

The Xiaomi Mi Note 10 also tops DXOMark rating with an overscore of 121. However, DXOMark scores heavily rely on the number of cameras the phone has and its zoom capabilities. So, you can take the score as a grain of salt. In the raw camera comparison, the iPhone 11 or the Pixel 4 still outperforms the Mi Note 10.

Another highlight of the Mi Note 10 is its huge 5260 mAh battery. Now, this one is the biggest of the lot among the 2019 edition Xiaomi phones. This large battery implies that you should get around two days of normal usage on a full charge.

Bigger battery means that you’ll have to wait a considerable amount of time for the device to charge. However, this problem is also taken care of. You get 30W wired charger that helps the device to charge up to 58% in just 30 minutes. And charging it to 100% should take about 65 minutes. Now, though it is not the fastest out there, it’s still a great achievement considering the huge battery.

In Nepal, Xiaomi might launch the Mi Note 10 as early as March of this year. Since Mi Nepal is honest with their pricing, the base variant should not exceed Rs. 55,000.