If you missed on yesterday’s Google I/O’17’s live streaming and don’t feel like going back to the youtube to watch hours long video, to explore the new features of next version of Android, then you’ve come to the right place. Here we’ve listed the top new features of the next version of Android, the Android O. But, still the possible Android 8.0 hasn’t got its full name so let’s address it with its well-known codename for now. We’ll mention its possible names at the end of this article with a poll, so don’t forget to drop your vote in the poll.

This new picture-in-picture (PIP) mode lets the user continue watching the YouTube video in a small window over the homescreen. They can still keep that video as a small floating window even while navigating through different apps. In current developer preview, only limited apps are supporting PIP including Google Maps. To activate this feature, the user has to tap on the home button and then the small floating window of the supported app will appear on the homescreen. The user can then reposition it to any of the four corners of the screen. 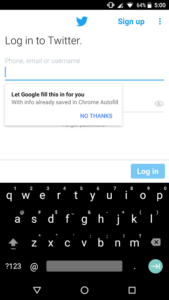 If you’ve used a chrome before, you must have an idea of how autofill works once you log into the chrome with your Gmail account. Your username and password details for different web services can be saved to your chrome account. Then every time you go to the log-in screen of webpage for which you already have saved credentials of, then the chrome will autofill those username/email and password parts. The same experience will now be available for the Android with this new version of Android, the Android O. So, it’ll get much easier to log into different apps on Android.

With the next version of Android, selecting names, phone number, location and other details will become much easier. You may highlight the name, number, or such details by double tapping on it and then you can not just copy those text but also use them in other apps to act further. For example, if it’s a location detail then you can double tap on it and load that location on Google maps. And, if it’s a phone number then you can add to contacts or even make a phone call after highlighting it by doubling tapping.

Android is far from uniformity and it can be realized more on icons depart. Few android phones have rounded icons, whereas few have circular icons and some even have flat rectangular icons. So, it wouldn’t look matching when a newly installed app will have different icon pattern than the icons of the pre-installed app. Therefore, Android O will have adaptive icons so that the icons of all apps will be either circular, with rounded corners, or flat rectangular depending on the launcher used.

The next version of android will aid in better battery life. One of the ways the system is optimizing battery consumption is by limiting background apps from waking up the resources. For instance, if a background app needs a location, the Android O won’t let it turn on the GPS but will feed with the last known location details instead. However, the app can easily get the full excess of the resources when it runs in the foreground.

The new security feature in Android O will check for apps in the phone for vulnerabilities and will notify accordingly.

Drop your votes on the possible name of Android O.