When it comes to smartwatches, the Apple Watch Series is as good as one can get. The company announced the latest smartwatch under the lineup during the Time Flies event held on September 15. Let’s take a closer look at the specs, features, expected price, and availability of Apple Watch Series 6 in Nepal. 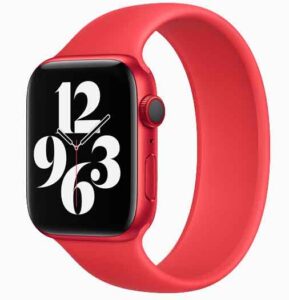 Before the actual unveiling, there were rumors that suggested that Apple could be moving on from the iconic square display that the Apple Watches have had over the years. However, Apple has not made the switch, at least for now. The new Apple Watch Series 6 still fancies the same design as its predecessor but the color options are wider than ever. The aluminum body is now available in Blue, Silver, Space Gray, Gold, and Product (Red) color. The stainless steel case is available in Yellow Gold and Graphite.

However, there have been some improvements in the display panel. Apple says that the new Apple Watch Series 6 is up to 2.5 times brighter than its predecessor. Apple has also introduced what it calls the “Solo Loop” band. It’s a strap for the new Apple watch but without traditional claps and buckles. It is available in two designs – soft silicone and braided yarn.

Apple Watch Series 6 is powered by the improved S6 System in Package (SiP). It is a sort of toned-down version of the A13 Bionic chipset found in the iPhone 11. The dual-core processor in the Watch 6 is claimed to be twice as fast as its predecessor. Similarly, the new Apple Watch comes with a U1 chip and Ultra-Wideband antennas which improves the short-range wireless location feature. Other components include a more efficient barometric altimeter, GPS, and Wi-Fi support. 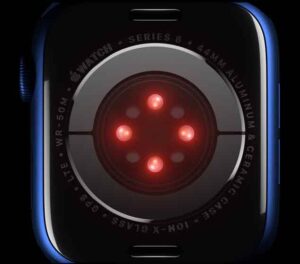 The biggest headline of them all is the new SpO2 sensor at the back of the watch. The new sensor sends out different light to your skin and reads the color of the screen to give you a more accurate oxygen saturation level. The watch is capable of reading your SpO2 level on a periodic basis and recording them for reference. That is not all – Apple is teaming up with different researchers and universities to improve the SpO2 senor and figure out ways to deploy it for a wider range of tasks.

watchOS 7 adds some notable features like the low-range VO2 Max, sleep tracking, automatic handwashing detection, and new workout types. It also comes with some new and exciting watch faces that users can choose as per their liking. Also, the new watch supports Family setup using which multiple watches can be connected to a single Apple device. With this users can take better care of their children or older family members who don’t have a smartphone of their own.

In spite of the boosted performance, the Apple Watch 6 offers the same battery endurance as its predecessor. That is, it can last up to 18 hours of usage. Similarly, you can fully charge it inside 1.5 hours. In a bid to limit the impact of e-waste on the environment, Apple will not be including a power adapter inside the box.

Apple Watch Series 6 will go on sale from September 18 where its starting price is $399 for the WiFi-only and $499 for the LTE variant. Similarly, prices will vary depending upon the watch band you choose as well. We expect the price of Apple Watch Series 6 in Nepal to start at NPR 55,000.