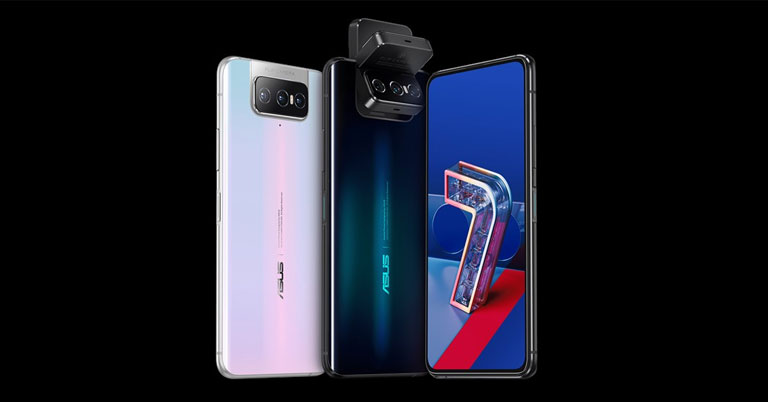 Asus is a known name when it comes to laptops and gaming smartphones. But it fails to garner any attention in the regular flagships smartphone segment. The company tried to change the customer’s perception through the Asus Zenfone 6. It was quite a revolutionary device considering its flip cameras. And now the company has come up with its successor, namely, Asus Zenfone 7 and Asus Zenfone 7 Pro. Both of them are true flagship smartphones and bring some exciting features to the table. So, let’s find out about the specifications of Asus Zenfone 7 & Asus Zenfone 7 Pro including their expected price in Nepal.

Zenfone 7 and Zenfone 7 Pro pretty much provide the standard specifications that flagships in 2020 should have. They both share most of the specifications between each other, however, there are some minor differences. The cameras are easily their selling point, so let’s begin with that.

There has been an improvement in the camera department of Zenfone 7 and 7 Pro from its predecessor. It is still a motorized rotating camera, however, it can now survive almost 200,000 flips. That’s almost twice as much from that of the Zenfone 6.

The connection of the camera to the body has been improved and the official rating states that it can survive 100 flips a day for 5 years straight. Furthermore, users can now manually select the angles in which they want the camera to flip. Overall, one will have a smoother experience with this one.

Talking about the camera module itself, it is a triple-camera array this time. The primary lens is the 64MP Sony IMX686 sensor with 2×1 OCL autofocus. Moreover, the sensor is capable of recording 8K videos at 30fps and 4K videos at 120fps. The primary lens is complemented by a 12MP Sony IMX363 ultra-wide sensor with autofocus and Dual Pixel AF to boot. Furthermore, it is also capable of recording 4K video. Lastly, there’s an 8MP telephoto lens with a 3X optical zoom. On the Pro variant, both the wide-angle and the telephoto lens get OIS. However, this feature is missing in the vanilla Zenfone 7.

As the camera module is a motorized rotating one, the back panel itself can be used to shoot stellar selfies. Here, the added bonus is that you get autofocus and 8K, 4K video recording capabilities on the selfie camera too.

The Zenfone 7 series sport a 6.67-inch Samsung-made AMOLED panel with 1080p resolution. They have a refresh rate of 90Hz and a touch sampling rate of 200Hz. Similarly, their peak brightness is 700nits, they have DC dimming, an Always On mode, and 110% DCI-P3 coverage. Thus, you get an accurate color calibration out-of-the-box. The benefit of having a flip camera module means that you get to fully utilize the 6.67-inch screen as there is no punch-hole or a notch.

Processor, Storage, and Others

The vanilla Zenfone 7 features Snapdragon 865 whereas the Pro variant comes with Snapdragon 865+. Similarly, both of them have LPDDR5 RAM. With the Pro variant, you get the 8GB/256GB combination. However, the standard one comes with an option of either 6GB or 8GB RAM coupled with 128GB storage. One can expand the storage of either phone to up to 2TB via a microSD card.

On the battery front, you get the same 5000mAh unit as seen in their predecessor. However, the devices now support 30W fast charging. Sadly though, there is no wireless charging.

Now, despite having an AMOLED screen, there is no in-display fingerprint sensor. It is now integrated into the power button and is side-mounted.

The global pricing of the devices will be announced next week. But as we can see, these devices won’t come cheap. So, if they become available in Nepal, the price of the standard Asus Zenfone 7 might be around NPR 80,000, and the Zenfone 7 Pro will probably cost NPR NPR 95,000.