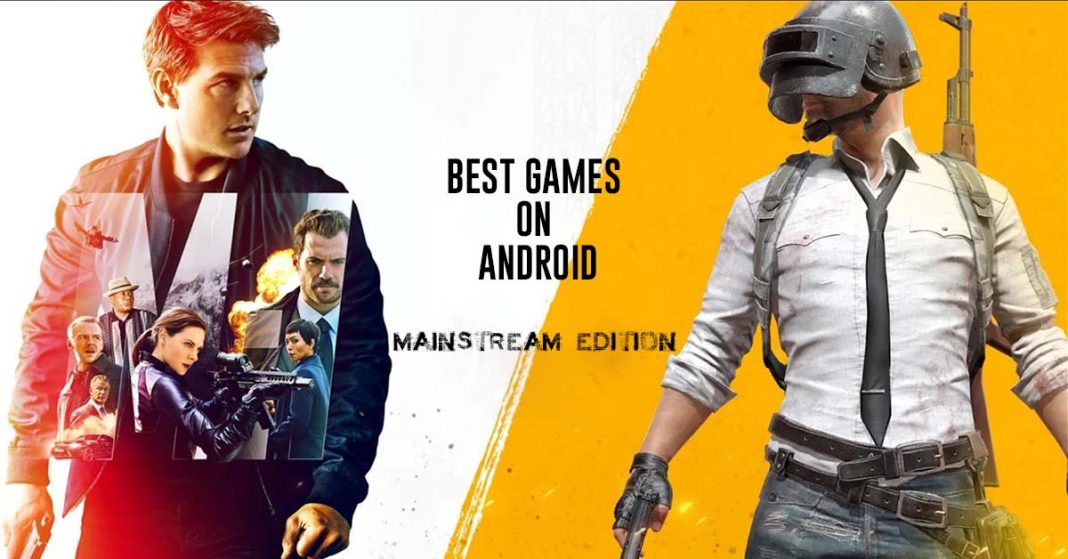 Games are a great way of letting your problems go and immersing yourself in a virtual carefree world. We also get that most people really don’t bother playing games on a PC let alone a console. So for that reason, we will be focusing on the most popular platform for playing games, that being Google Android.

Also Read: The Most Popular Mobile Games Downloaded Over the Years

So, let’s look at some of the best Android games, new games, and games that have a special part in our hearts. The rankings are in random order so, do not take any offence if your favourite games happen to be at the bottom of the list.

Pretty much one of the best game on the Play store right now, a perfect combination of great gameplay and some realistic at the same time awesome graphics. It’s not as good as on PC, but it’s also free so there is that. It’s basically a toned down version of the PC, although EPIC has really managed to do a fantastic job of retaining the actual gameplay from the PC version.

“100 players parachute onto a remote 8×8 km island for a winner-takes-all showdown. Players have to locate and scavenge their own weapons, vehicles and supplies, and defeat every player in a graphically and tactically rich battleground that forces players into a shrinking play zone. Get ready to land, loot, and do whatever it takes to survive and be the last man standing!” – PUBG Mobile Playstore description.

Everyone didn’t go as nuts for this game as one would have thought. The game even went live a full day ahead of its schedule which did affect it’s overall first-day download numbers. Well, let’s just say it’s not really much of a big deal as it already has more than a million download already. The game, I felt was a bit worse than before, but then again, the fun hasn’t stopped.

“The gameplay in Asphalt 9 is similar to Asphalt 8: Airborne, with noticeable differences in graphics and design. There are 48 cars for players to collect, all of which are extremely prestigious. Just like in the previous games, there are five classes: D, C, B, A, and S. All cars in the game now require “blueprints” to unlock and level up. To add on, a new car editor is in the game. There are also “clubs,” where you can make a community of players, and achieve rewards.” – Asphalt 9 Wikipedia Page.

This one is one of my favourites as well, with a pretty relaxing gameplay experience. It’s a simple game with literally one input method, but you will find yourself doing so much with just that. The gameplay along with the mysteries that you go on unlocking, the graphics itself and most importantly the background music is such a nice combination. You just have to actually play it once to just know what I am babbling about.

“Just beyond the horizon sits a majestic desert, vast and unexplored. Join Alto and his friends and set off on an endless sandboarding journey to discover its secrets. Soar above windswept dunes, traverse thrilling canyons and explore long-hidden temples in a fantastical place far from home. Along the way, you’ll grind across vines, bounce atop hot air balloons, ride towering rock walls, and escape mischievous lemurs – all while uncovering the desert’s many mysteries.” – Alto’s Odyssey Play Store Description

Fifa Soccer is as the name suggests a football game. I did get addicted to the FIFA 14 on Android for a brief period, but it’s been a dry spell for a while now until EA finally decided to launch another FIFA for Android, the FIFA Soccer. It’s still not perfect, I mean it doesn’t even get a simple kick off mode, so you will be training for a while before you can get any sort of real action (It’s not actually long, it just feels like an eternity). Nevertheless, I would really recommend football fans to try this out once.

“Develop the most competitive squad when you choose any 11 players from over 550 real teams, including stars from past and present, and train them to over 100 OVR. Add depth to your roster, manage your lineup on the fly, and quickly tweak tactics before every match. Make the right calls and watch your club become the Ultimate Team.” – Fifa Soccer Playstore Description

Arguably one of the best games of all times, if you take your time and learn the game through. It doesn’t actually boast the highest number of downloads that’s more because it’s a paid game rather than a free one. The $7.49 is a hefty price tag for an Android game, maybe just download a cracked .apk first and see if you actually like the game or not. If you give it enough time, you will actually learn to see what the game is actually all about.

“Explore infinite worlds and build everything from the simplest of homes to the grandest of castles. Play in creative mode with unlimited resources or mine deep into the world in survival mode, crafting weapons and armour to fend off dangerous mobs. Create, explore and survive alone or with friends on mobile devices or Windows 10.” – Minecraft Playstore Description